At Linderhof Always Look Up

At Linderhof -- at least upstairs you should always look up! For I've come to paint the ceilings -- creative painting around the light fixtures. 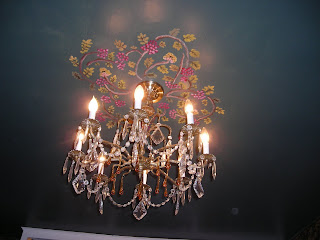 This is in our sunroom and was my first. The colors were chosen to compliment the border in the room and yes, the ceiling is dark green. Except for the kitchen, the ceilings at Linderhof are never plain boring white. We have a mirror on a tall piece of furniture that reflects the chandelier as well as the decorative painting thus doubling the impact of this my first "work of art".

We hung a new chandelier in the upstairs bathroom and it threw an interesting reflection on the ceiling and so with ladder in tow and paint in hand, I "painted" the shadow. 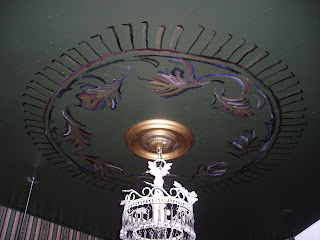 I found, however, that I had to paint at night for the shadow didn't really show up in the daytime! At night it is an interesting effect with the painting on the ceiling emphasized by the shadow from the chandelier.

I wanted to do something in the guest room and often in meetings I would draw sketches of what to do with that ceiling. I must admit that some of my plans were grand -- too grand actually -- for they would have started painting about a foot out all around the ceiling and then do decorative painting out from each corner. But sketching plans on paper is not the same as standing on a ladder with a paper plate of paint and I realized that these grand sketches would not be doable.

And then at a flea market I ended up with an Old Victorian magazine in a bunch that I had purchased. Leafing through the magazine I saw a glimpse of a ceiling painting around a light fixture. 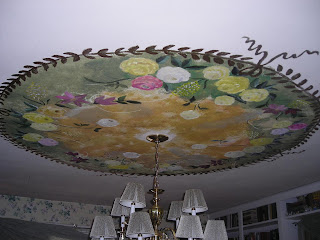 And so, I made my interpretation of that partial picture. It's still bigger than either of the others -- six feet across and unlike the others, it is done in oils rather than acrylics because of the roses. 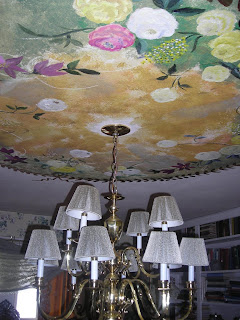 But it was by far the easiest of the three to do although I did the painting for the most part standing on the bed that was in that room (I loathe moving furniture for "little" things!)

I enjoy the decorative ceilings upstairs and it was fun to let my creativity flow to make Linderhof's ceilings unique.
Posted by Martha at 5:34 AM

Wow, you are amazing. I wouldn't paint on the ceiling unless you held a gun to my head. These are really pretty.

Thanks Mary -- the only downside I found to painting on the ceiling is that you can't step back and take a look at your work!!!!! (Ladders are not that wide!)

LOVE THIS! I remember a woman who worked with me on a fundraiser in Texas had a gorgeous home. She had an artist paint on canvas a beautiful scene, then they put that on the ceiling (like wallpaper) around her two chandeliers in the dining rom. It was spectacular! I tried to get Scott to agree to do something like that at Casa de la Vanderdogan - but no go. As usual - too different for him. LOL! Your ceilings are gorgeous Martha - just fantastic! As is your whole house. That's why I've spent most of my free time roaming your blog instead of hitting up the others ... oopps!