Today is Midsummer's Eve. A night that the fairies come to the garden. And we do have fairies in the garden at Linderhof. 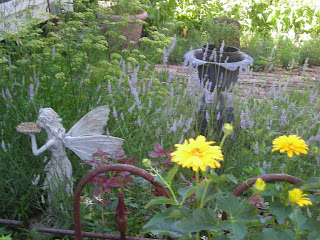 This fairy lives in our herb bed. It's not fairy dust in her hand but rather bird seed and often, the birds will light near her hand and take their morsel from the stash before she blows it into the garden. 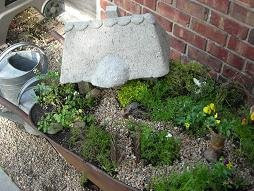 And we made a garden for the fairies. A wee garden for the wee folk. Sometimes we do have fairies come to the garden and I think I captured one in the garden. Often, I think at night I see lights shining from the house as fairies go about their housework before settling down for bed.

And to prove that we believe in fairies, we have a corgi. They were originally dogs for the wee folk of Wales. The fairy queens would hitch corgis to their coaches on Midsummer's Eve and on the first full moon in October.

And if you don't believe me, just look at a corgi -- all corgis have the harness marks of the fairy coaches on their backs.

Oliver certainly does. And tomorrow, he shall be an especially tired dog we find. He sleeps most of the day having been up all night with the fairies.
Posted by Martha at 6:28 AM

I LOVE your Garden Fairy. Where on earth did you find it? I think this is the first time I have seen a pic of it in your garden. As you know I admire and love to add gardening elements to my own garden.

I just read your wonderful seafood recipe and while I was still drooling, I noticed the post about corgis. I love the fairy story. We also have a corgi... Elvis. Pa thinks he is so funny because he actually SITS at his bowl to enjoy his food. I may need to do him a tablescape!