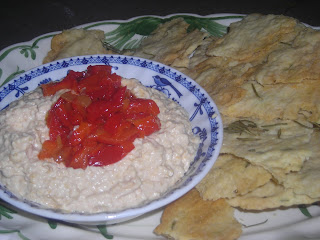 Almost every Friday we go to what we call a "Courtland". It's an easy cocktail party where everyone brings an appetizer for the communal food table and everyone brings their own drink. We've been doing these parties on the prairie for over 10 years now and it's a great way to end a work week or start a weekend. It's an eclectic group of people which makes for an interesting evening. Often, we'll break into small groups and head out to dinner after.

Last night I brought The Barefoot Contessa's Hummus and homemade flatbread, the recipe from a food board. I've never had a "signature" appetizer as many attendees do but I just might make this my "signature" -- it is so good and so easy! 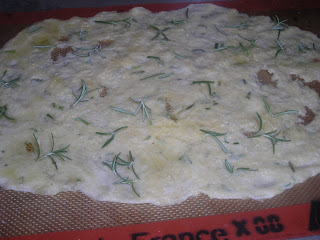 Some flour, olive oil, a bit of salt and baking powder, rosemary from the garden. You pat it out on parchment or silpat, and then brush with olive oil and add more rosemary. 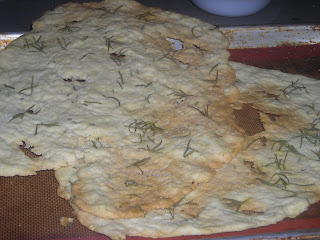 It bakes quickly and then when cool, you break it into pieces. After making it a couple of times, as is, I improvised and used thyme instead of rosemary and topped the flatbread with pepper and parm instead of salt. I think it is a recipe that calls for tweaking. But last night, I made it "as written". I'm not sure that I'll ever buy crackers again! 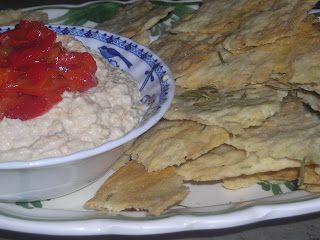 The hummus is easy and there's always a can of chick peas and some tahini in the pantry at Linderhof. Friend Sally dropped the peppers off yesterday and they were the perfect topping for the hummus.

Preheat oven to 450°F with a heavy baking sheet on rack in middle.

Stir together flour, chopped rosemary, baking powder, and salt in a medium bowl. Make a well in center, then add water and oil and gradually stir into flour with a wooden spoon until a dough forms. Knead dough gently on a work surface 4 or 5 times.

Divide dough into 3 pieces and roll out 1 piece (keep remaining pieces covered with plastic wrap) on a sheet of parchment paper into a 10-inch round (shape can be rustic; dough should be thin).

Lightly brush top with additional oil and scatter small clusters of rosemary leaves on top, pressing in slightly. Sprinkle with sea salt. Slide round (still on parchment) onto preheated baking sheet and bake until pale golden and browned in spots, 8 to 10 minutes. Transfer flatbread (discard parchment) to a rack to cool, then make 2 more rounds (1 at a time) on fresh parchment (do not oil or salt until just before baking). Break into pieces.

Cooks’ note: Flatbread can be made 2 days ahead and cooled completely, then kept in an airtight container at room temperature.

Martha, I really like this recipe. It's great to have something like this in the recipe file. I love the fact that there is no 'rising' time involved.

Life on an artistic shoestring said...

I got here from Met Monday and have to say that this recipe looks so easy and tasty! I will save this and try it out real soon. Thanks, -shirl