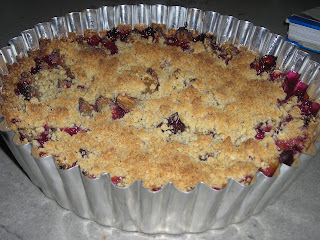 In September, the Italian prune plums come to the market -- they are the smallest purple ones -- and I'm always excited when they do. They're great to eat out of hand but they're also great in baked goods.

Last week we had not one but two dinner parties. Dinner parties call for desserts and September calls for plums so . . .I used for inspiration a newest cookbook -- Summer on a Plate -- by Anna Pump (a longtime favorite of mine). It's a great tart recipe although it really is an old friend for it first appeared in Anna's Loaves and Fishes Party Cookbook and I met the singular version of the tart in one of Ina Garten's (The Barefoot Contessa) cookbooks.

It's truly a simple recipe and goes together very quickly. I did use a tart pan instead of the springform both times I made it (unfortunately I made one at a time rather than following Anna's recommendation of doing them in pairs).

But I have since found out that Anna's two tarts are the right amount -- one is never enough!

Combine the flour, walnuts and sugar in a large bowl. Add the butter and the egg yolks and mix by hand or with an electric mixer until crumbly (I used my food processor for this).

Press 3 cups of the crumb mixture into each of two 9 or 10 inch springform pans, creating an even layer over the bottom of each pan. (I used a regular tart tin for this recipe). Beginning from the outer edge of each pan, arrange the plums in a circular, flowerlike pattern, skin side down, over the doughy layer. Sprinkle the remaining crumb mixture uniformly over the plums.

Bake 50 to 55 minutes or until lightly browned and the plum juice has risen to the top. Remove from the oven and cool 10 minutes. Transfer the tars frm the pans to flat cake plates. Serve warm or at room tempature.

This looks gorgeous and is on my list of "MUSTS" to make this week.