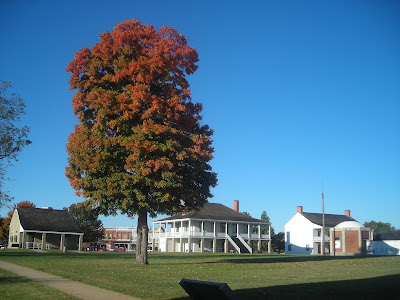 The Fort is the reason that our little town on the prairie exists. In 1842, the Government built the Fort -- the second fort on the military road from Leavenworth. It's the midway point between Leavenworth and Gibson.

The town grew from the Fort and when you step outside you are just across the street from downtown.

Named for General Winfield Scott, the renowned general was so irritated that this fort named for him was "in the middle of nowhere" -- that he never visited this tribute to his military might.

A fall day is a pretty day to visit our Fort -- the leaves are starting to turn on the trees on the parade grounds. And the air is crisp and cool.

Our little town is lucky that the Fort is now a National Historic Site. It's been restored and preserved.

It's a great place for a walk on a sunny fall day.
Posted by Martha at 7:08 AM

I love to know the history of places I visit. The grounds of the fort look pristine and I can almost imagine soldiers marching on parade.

Mary -- they do March -- we have a great wealth of volunteers that work the fort on the weekends dressed in dragoon clothing.

We are so fortunate to have this place preserved in our town.