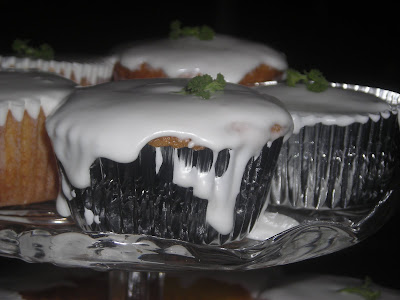 We believe in fairies. We even have a wee house in the garden for the fairies and often, you'll find one in the garden outside the house -- smelling the thyme or cammomile planted there. It's October and during the October full moon you'll find a lot of fairie activity. 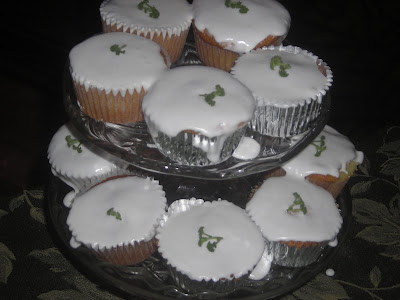 Not that we made these cupcakes for the fairies but rather in honor of them. They're from Nigella Lawson, so easy to make and they're on the small side which is why we call them Fairy Cakes. 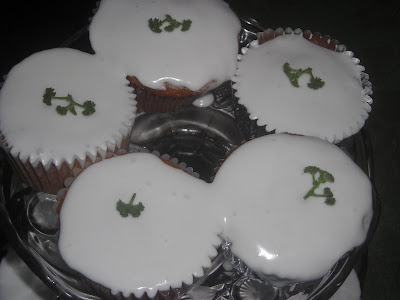 On Midsummer's Eve, we decorate the cakes with pansies but fall and the Hunter's Moon calls for sprigs of lemon geranium. The lemon flavor of the icing is enhanced by the lemony aroma of the geranium. They even look celtic with the green against the white.

Nigella calls them cupcakes but I renamed them fairy cakes because they are a magical cupcake -- small and easy to put together. They're a favorite at Linderhof whether on Midsummer's Eve, the full moon in October or just because we're having company for tea.

Take everything you need out of the fridge in time to get to room temperature -- and this makes a huge difference to the lightness of the cupcakes later -- and preheat the oven to 400 degrees.

Put all of the ingredients for the cupcakes except for the milk into a food processor and blitz until smooth. Pulse while adding milk the milk down the funnel, to make a smooth dropping consistency.

Divide the mixture between a 12-bun muffin tin lined with muffin papers, and bake in the oven for 15 to 20 minutes. They should have risen and be golden on top. Let them cool a little in their tins on a rack, and then take them carefully out of the tin to cool in their papers, still on the wire rack.

Combine the egg whites and powdered sugar in a medium size mixing bowl and whip with an electric mixer on medium speed until opaque and shiny, about 5 minutes. Whisk in the lemon juice, this will thin out the icing. Beat for another couple of minutes until you reach the right spreading consistency for the cupcakes.

This is more than enough to generously ice 12 fairy cakes.
Posted by Martha at 6:51 AM

What a terrific tea-time treat. They're gorgeous!