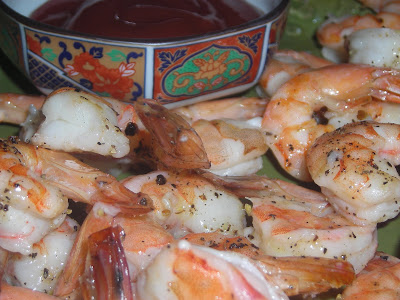 We love shrimp cooked without deep frying and without breading. A favorite Friday evening dinner when we lived in the city was at a small tavern not far from our apartment who served mounds of boiled shrimp. Washed down with an icy beer. 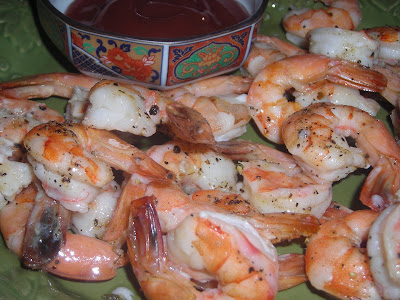 The first time I roasted shrimp, we were both amazed at the flavor of the shrimp. It was not watery and had a great shrimp flavor.

After that first appetizer of roasted shrimp, I decided that boiled shrimp would never again grace the table at Linderhof.

It's a simple method. Peel the shrimp but leave the tails on (makes a great handle), preheat the oven to 400, sprinkle the shrimp with olive oil, salt and pepper and toss. Roast for about 5 minutes or until the shrimp turn pink. Don't overcook. 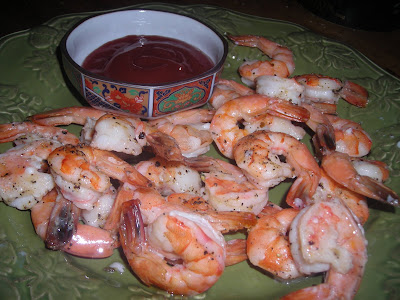 Of course, what is shrimp without cocktail sauce. Whether it is from a jar or homemade. The Roasted Shrimp Cocktail episode of the Barefoot Contessa had a 1000 Island Type of sauce. Similar to the one that I grew up with. Mine, being much simpler, half mayonnaise and half ketchup.

Barefoot Contessa Back to Basics includes a recipe for cocktail sauce and like all Ina recipes, it is very good.

Shrimp Cocktail Sauce
(From Barefoot Contessa Back to Basics)

Combine all ingredients and serve as a dip for shrimp
Posted by Martha at 6:51 AM

Your photographs of the shrimp are spectavular. Great color - I want to grab one from the plate.

I've never tried it that way. Going to give it a go. I'll let you know how I like it but sounds like a great way!