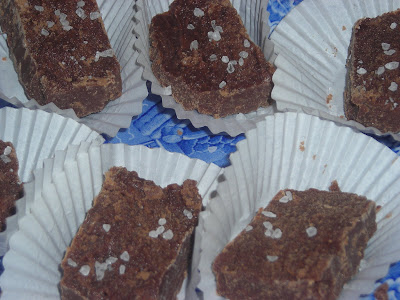 Fudge has always played a big part in our Christmas celebrations. As there could not be a Christmas if there wasn't cookies, there can't be Christmas without fudge.

My parent were friends of the Russell Stovers (of candy fame) and somehow, mother was able to get Clara to share "the" fudge recipe. That was our Christmas fudge for years. In winter, often when we wanted something sweet, mother would whip up a batch of Hershey's cocoa fudge. It was easy, fairly inexpensive -- a little cocoa, some sugar, milk -- it was quick and my brother and I loved it. One time, she goofed and we ended up with tootsie rolls!

2008 seems to be the year of the "fleur de sel" -- there are caramels (from Ina Garten), toffee (from Martha Stewart) and fudge (from Supper in Stereo).

When I found the fleur de sel fudge, I just had to make it.

And once made, I was hooked. It's sweet but salty as well. The fleur de sel gives a nice "crunch" to the fudge.

It reminded me of when, in my other life, after a particularly stressful afternoon, I would first hit the machine for a chocolate bar and after finishing that would end up getting some potato chips. This fudge has that sweet/salty flavor.

We've polished off one batch of fudge (made for a friend whom the sleet prevented us from visiting -- what is one to do but make the sacrifice and eat it) and have almost finished the second.

I'm sure another batch will be made before Christmas. 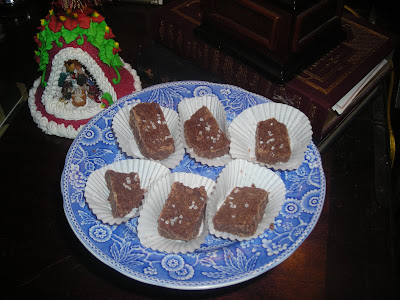 1. Grease an 8×8 square or 9-inch round cake pan with butter. Set aside.
2.Place milk, cream, sugar, and cocoa powder in a heavy-bottomed pot, and bring to a boil on medium-high heat, stirring occasionally. When the mixture is boiling, turn it down to medium to prevent it from boiling over. Monitor with a candy thermometer, stirring occasionally if necessary.
3. When mixture reaches soft ball stage, or 234-240 F, remove from heat and beat vigorously until the mixture has lost its glossy appearance. Stir in butter and vanilla, then gently stir in 1/2 tsp. fleur de sel.
4. Pour fudge into prepared cake pan, and sprinkle remaining fleur de sel on top. Leave to cool before cutting into small squares.

I know what I'll be doing once I'm coffed out and had my cereal. Martha, this looks terrific.

I have made a copy and will make this over the weekend. I have some Italian cocoa which I think I will use. It wouldn't be Christmas without some homemade fudge at our house either and I like your recipe better. I MUST try it.

Martha, I'm so glad you enjoyed the fudge! We liked it too, and I love it when I discover other people actually cook from our blog!

Your house looks perfectly gorgeous, by the way.