Drunken Tomatoes or Bloody Marys on a Stick

At least one Friday per month, and sometimes more frequently, we, on the prairie attend what is known as a "Courtland". It's an afterwork cocktail party where everyone brings what they want to drink and something to put on the communal appetizer table.

It's easy for the host: the house to clean, napkins, ice and plates to purchase and set out, and also an appetizer for the communal table.

The only common denominator between the attendees is that we all reside in this little town on the prairie and are invited by someone who already attends. We, husband Jim and I, are "charter members" of the group.

There are millionaires conversing with those existing only on social security. Singles and marrieds. "Foreigners" (those not raised here) and those who lived here all their lives.

It's a great way to end the work week or start the weekend. The party starts at 5:30 and lasts until 7 to 7:30 when we scatter either to go home (full from appetizers) or smaller groups will get together for dinner.

Some of the group always brings the same thing and we do look forward to Judy's artichoke dip and John and Cindy's cheese dip, or Darlene's deviled eggs. But I am always bringing something different -- sometimes a new recipe and sometimes an old friend.

Last Friday was a Courtland -- my offering for the communal appetizer table -- the dish known as Drunken Tomatoes or Bloody Marys on a Stick. 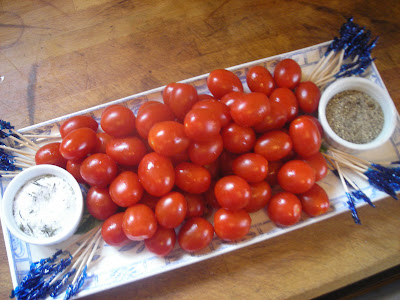 It's an easy appetizer. A container of cherry or grape tomatoes, pricked with a fork, submerged for several hours in vodka (plain, lemon or pepper). Eaters spear a tomato and then dip them in either salt, pepper or both! 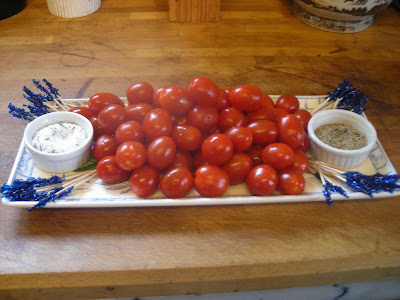 I chose to serve them with my rosemary salt (made last summer, layers of rosemary and sea salt -- so good on anything that you would put rosemary on) and celery pepper (celery salt and freshly ground black pepper mixed together).

The tomatoes, as usual, were all gone when the party ended.
Posted by Martha at 10:27 PM

I LOVE your home!
And the dish you brought. How different. I have never heard of such a thing but it sounds delicious. Also...what a nice thing..the gathering of many different folks. What a wonderful way to socialize. There is something to be said for small towns. Actually, there is a lot to be said for them!! We attend a very tiny church..and it is sort of like that. I love it. That was a neat post.
Mona

I liked your telling of your Happy Hours~
Could be a movie:) The tomatoes are such a cute idea..

I really like your Bloody Mary tomatoes. Will have to try. And I agree, what is it with the deviled eggs and men? Even though I love them myself as an appetitzer.

Here on the prairie, deviled eggs are one of the basic food groups.

I'll have to go carefully backwards to figure out how I got here - a friend's blog, then one I've been following for a bit, then another......then here.
Anyway, I'm glad I found your place - what wonderful recipes.
Your weekly gathering sounds like a lovely tradition - and your tomatoes might just become one of ours!