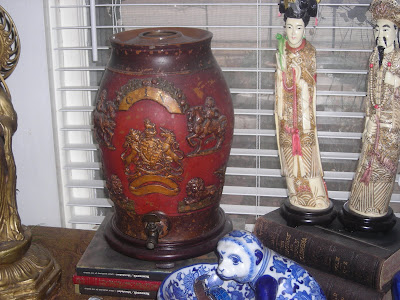 An old English gin barrel from the early to mid 1800's. Bought as a Christmas present for husband Jim several years ago at an antique show in the city. Not one of our usual bargains for it was a costly piece. 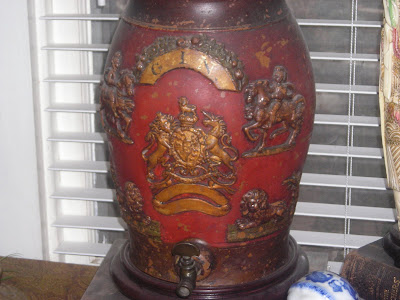 It's pottery and a wonderful red color. It's purpose was to store gin in the pubs. It has a spigot from which the gin could be poured. In the early to mid 1800's pubs had ales, gins and whisky (which to us is Scotch). Vodka was still in Russia, rum in the Caribbean, and Bailey's Irish cream hadn't been invented yet!

It was a great surprise that Christmas when husband Jim opened his only Christmas present to find the gin barrel -- for he thought it had been bought from under him and he would never see it again! 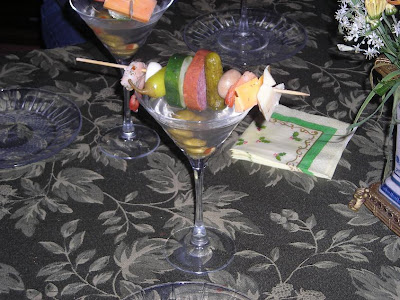 And although we don't store gin in the barrel, we do enjoy that perfect martini, mostly every night and mostly in the breakfast room overlooking the garden.

We also love our evening martini, but that looks like the entire dinner. How clever. Love the gin barrel.

That's lovely ... so what's the secret to the perfect martini?

Our perfect martini is gin extra cold, a touch of vermouth, a little bit dirty, glasses chilled and shaken not stirred.

Martha, what a neat story about the gin barrel. I never knew about those. Your martini looks lovely. As you know, I am not a martini afficianado. What does a little bit dirty mean?

P.S. And what a nice Christmas surprise that was for Jim.

"dirty" means a bit of the olive juice in the martini.