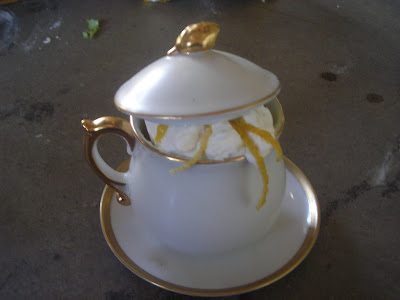 Pot de creme refers both to the dessert inside as well as the cup holding the dessert. A step up from ordinary pudding, it is a baked pudding and it is served in these perfect little cups. I have 8 -- but two sets of four. Both are white with gold rims so they look good on the table together. But, one is a bit smaller than the other.

These little cups that look so delicate are indeed not for the pot de creme mixture is poured into the cups and these little cups are then placed in a water bath and baked in the oven!

I have a great recipe for chocolate pot de creme from Dean and Deluca's -- it is truly chocolate to die for.

But it is January and tired of the apple and pear desserts, we chose to serve a lemon pot de creme for the Paperwhite Luncheon. Lemon is so refreshing and lemons are so plentiful in the market this time of the year. 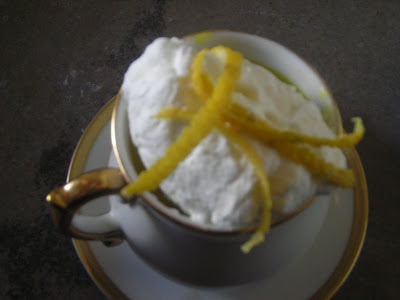 Whether it is chocolate or lemon, a big dollop of sweetened whipped cream is a great topping. With lemon, a few shreds of lemon on top. 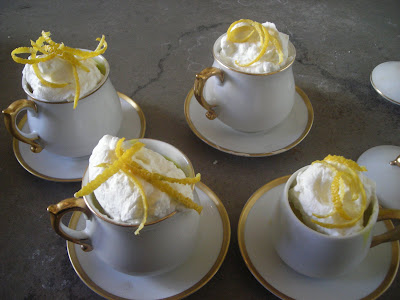 Each pot comes with it's own saucer and a wee little lid. These little cups, saucers and lids do make a great presentation when it comes to dessert.

This recipe is not a true pot de creme for it isn't baked (but then neither is my chocolate one) so it's more of a mousse than a pot de creme. Whatever you call it, it's nice and lemony and looks great served in these little pots.

Remove from heat, then beat with whip on medium speed until cold and thick.

In a small heatproof bowl, combine the gelatin and water, allowing to soak for about 5 minutes.

Place the bowl over a pan of simmering water until melted. Remove from heat and allow to cool

Whip the cream on medium speed until it just holds it shape. Whisk the gelatin into the egg yolk mixture. Fold in the whipped cream. Pour into pot de creme cups. Chill

Your little "Lemon Pot De Creme" look and sound so delicious, I would love to have a set of those little pots, they are so elegant. WOW. Kathy.

I LOVE your little "Pots De Creme" and what a gorgeous presentation. You photos were some of the BEST I have seen you do. BTW, I dearly LOVE those little pots too.

Thanks Carolyn -- I am learning.