Growing up in the 60's everyone, it seemed had a fondue pot. It was the "sophisticated" thing to do!

Resurrected by another generation in the 80's, fondue parties replaced the spaghetti and jug wine dinners that we thought were oh, so sophisticated.

Then along came the new century and fondues were resurrected once again!

In our early married years,  fondue parties were fun and at a group event, several brought their pots and we had cheese, meat and chocolate fondues. Washed down with glasses of wine.    That cheap jug wine that went with our spaghetti dinners.

When the fondue craze waned, I'm sure I decided that my colorful metal fondue part was taking up too much valuable kitchen cabinet real estate and went off to garage sale land.

And now, in the throes of the latest fondue popularity, I succumbed and ordered a new fondue pot -- but not an ordinary pot, an Emile Henry one. Made from Burgundian clay. The fondue can be made on top of the gas range and then pot and all can be put on the stand over the fire. 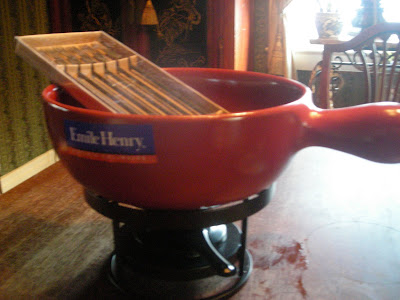 I think it's handsome. It's got a nice weight to it. I can't wait to make my first fondue in my new pot  -- cheese, of course! 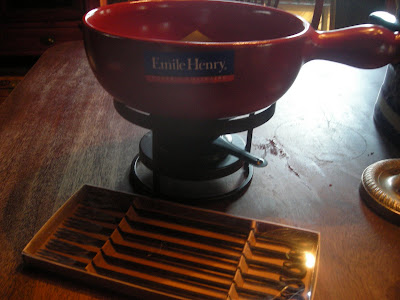 Six special forks came with the pot -- which of course, narrows down my guest list for the maiden voyage of the fondue pot to two couples. 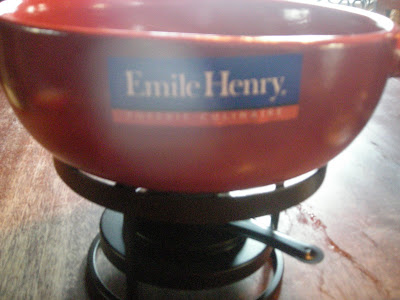 It wasn't inexpensive, but then nothing from Emile Henry is. I think it is worth it. I can't wait until I take it for it's "test drive".
Posted by Martha at 10:45 PM

That's a beautiful pot!
I still have my circa 1974 fondue pot and was amused when my 22 year old asked to use it. There have been years when it's sat on the shelf, and then years when it has been a popular piece of kitchen equipment. I hope you enjoy yours!

Love your new fondue pot, Martha. I have the All Clad Fondue Pot and have not used it yet. (????) You have inspired me. A good chocolate fondur sound terrific with some fresh strawberries. We should be seeing some Plant City, FL strawberries soon in the grocery stores.

BTW, Your Boeuf Bourguignon
looks fabulous.One of my most favorite dishes from Ina's Paris book.