We love chandeliers at Linderhof. When we first moved here, there was a chandelier (although small) in the dining room and every other room had ceiling fans!

We soon rectified that and one by one, each room received a new centerpiece -- a chandelier. No matching from room to room. Each room's chandelier reflected that room's personality.
The chandelier in the living room was a good buy at the time and although we liked it -- we didn't love it. But it would do. Then, coming home from our cruise, we stopped by an antique shop in Tulsa. There, under the table, was a beautiful chandelier. Solid brass and BIG! I knew immediately that it was what was needed in the living room. The centerpiece that our biggest room needed. 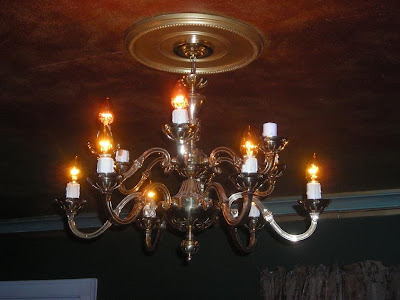 It's bigger than our old one -- twelve arms instead of six and for a house with only 8 1/2 foot ceilings, it doesn't hang down quite as far -- which is a plus! 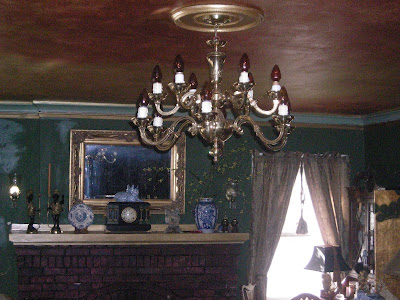 The chandelier hangs down enough, however, than when lit, it's light is reflected in the mirror over the fireplace, which means that we get twice as much "light" for the price of one chandelier!

Did I mention that it was a "steal" as well? A very reasonable price for a chandelier of that quality. The age? I'm not sure if it's twenty years old or fifty years old. But age (nor lineage) matter much at Linderhof. Finding the perfect piece does. 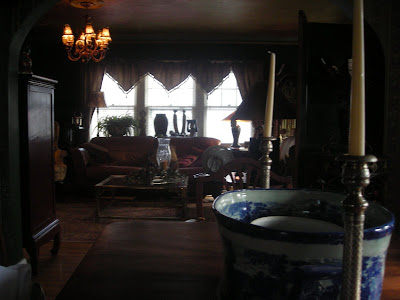 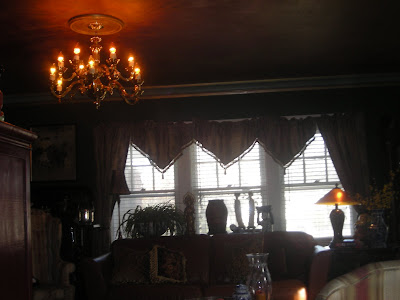 However, the new one does!

Oh, yes, we had to have it professionally installed. It was heavy enough that we had to put a metal brace in the ceiling to hold it.

But in our opinion, it was definitely worth it!
Posted by Martha at 2:34 PM

The chandelier is FABULOUS. I love a living room with a chandelier. 12 arms! What a great find. Love that it is reflected in the mirror.

I love your chandelier. it looks like it belongs there. Congrats on your wonderful find.

HOW FUNNY!?!?! We use the amber bulbs in our house for the antique fixtures, too! I changed up this year and did shades over the sconces in the living room with white light bulbs - but the dining room is still amber. Don't you just love the warm glow that it casts? GORGEOUS!