The PERFECT Roast Chicken . . . and the LESS Than Perfect Roast Duck 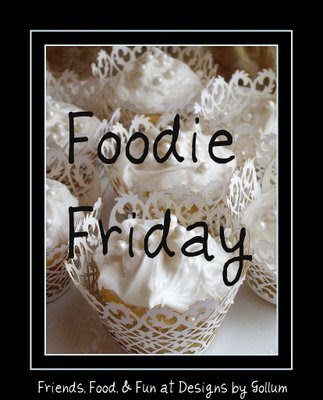 It's another Foodie Friday hosted by Designs by Gollum -- be sure to see what everyone else is cooking up this week. Or see what their "foodie disasters" were! 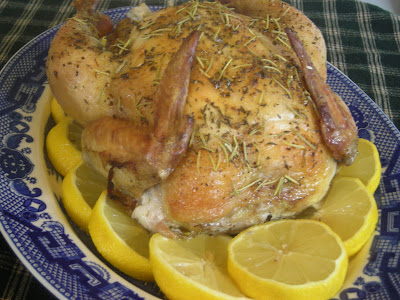 We love chicken -- cooked almost any way but we especially like it roasted. It's an easy meal to do and if the chicken is big enough it can serve a crowd. If it isn't, it is enough for the two of us with leftovers. (And is there anything better than a cold chicken leg before bed?) 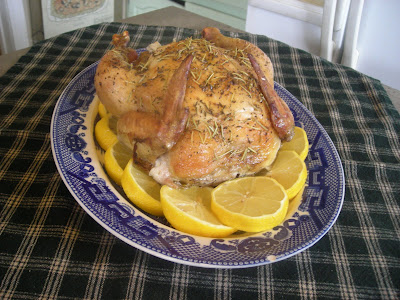 It's easy to roast a chicken -- you take out anything that is inside (and this is a very important step), then you fill that inside with halves of a garlic bulb, lemons cut into quarters, rosemary sprigs, thyme sprigs. Rub the outside with olive oil and sprinkle rosemary or thyme and salt and pepper. Put in a pan, put in the oven a 425 oven and you're free for between an hour and an hour and a half (depending upon the size and weight of the chicken).

We often serve it with oven roasted potatoes and perhaps a salad of mixed baby greens with vinaigrette to round out the meal. A dessert to end the meal only if we have company. If we don't, we'll end the meal with a cup of espresso.

THE TALE OF THE DUCK
(My worst kitchen disaster)

In my early married years, I decided that since we had turkey at Thanksgiving that we should have something different for Christmas. Being an adventurous cook even then, I decided on duck a la orange. A very ambitious dish for a novice cook such as I.

The whole menu, in fact, (with the exception of dessert for I made a pumpkin pie) was "gourmet".

The table was perfection with good linens and the china and crystal and silver and a festive centerpiece. The dishes were brought to the table. We passed all the dishes and tasted . . .
and tested . . .

NONE of us liked anything! EVERYTHING was awful! The duck was terrible. (Not only was this my first time cooking duck -- it was my first time EATING duck). The "gourmet" sidedishes were awful (awful perhaps because the duck was really bad).

We left everything as is on the dining room table and went into the living room where I served pumpkin pie and coffee to everyone.

As we were enjoying the first food of Christmas that was edible, we heard a commotion in the dining room . . .

The dog on the floor was a bit unhappy -- a feast oh, so close, and yet, she was oh, so far away!

until the duck fell to the floor and into the mouth of a very surprised dog who didn't understand how come she got this bounty but was glad she did!

With duck in mouth, she headed off to the secret place that all dogs seem to go when confronted with more than they can consume immediately.

We laughed and cheered!

THAT duck would never again grace our table. I didn't have to worry about leftovers and we had plenty of pumpkin pie!

Cute story....animals always seem to be right near by when bad food is on the table...I had a dog once that jumped up to the kitchen counter and grabbed a raw sirloin roast and took it away and ate the whole thing....raw!! I was out of the room at the time and walked in to wonder where it went...Gotta love our animals....

Oh so funny! I swear, they can read our minds and know when to strike!! Teh chicken looks really good, by the way. I also saw your recipe for Madeleines...looks so good! Have a great weekend...Debbie

The best thing is being able to look back and laugh about it, although at the time I'm sure you didn't feel that way! Some of my worst cooking disasters our now our funniest family stories that we like to relive over and over again.

Wonderful story. Sounds like the cat had a grand Christmas.

Great story! As the wife of a duck hunter, I have yet to find a way I truly like it except in gumbo(where it is disguised :)) I have a cat story on my post too!

The chicken is beautiful! I love the way you have presented it. Funny story about the duck. I love it in restaurants, but have never made it myself - sounds like that's a good thing! :D Jewel

Ooh chicken! Where would I be without you? Your roast chicken looks glorious.

The duck story is hysterical.

I love the duck story. So funny! I could see it as it happened, through your words.

First of all, your chicken looks wonderful!

What a funny story about your duck dinner. We've all had those. I can just see your dog stealing away with the duck!

A rollicking good story! Whenever I cook a hen or turkey, I always have a few moments of sheer panic while I search every crevice for hidden innards (all it takes is ONE time to get caught with a baked turkey liver, and you are never the same, lol).

One Christmas we decided to shake up the traditional menu. I ordered a goose, along with caviar. The results were just like yours. It was awful. We are still digesting that meal. lol

Still LOL! I would classify that as a "blooper" alright, lol!

what a funny story!! At least someone enjoyed your Christmas dinner! How disappointing but hilarious at the same time! Your chicken looks delish!

Oh - your doggie thought "Santa Paws" had arrived --- with the best Christmas EVER! I'm so laughing!

Have to give you credit for even trying a duck for a holiday without giving it a "dry run" first! The dog is still Ok isn't he??? lol

I have to say I have tried to like duck but... blech. Of course I think any one of my animals would think they had gone to heaven if a roast duck hit the floor! I do love stuffing lemons in roast chicken, delish. Pam

Great story. I'm glad someone else has crazy food/pet stories! I think duck must be an acquired taste and I never acquired it, however, that chicken looks wonderful. I certainly could do some damage there! Nancy

Oh girl that was too funny I had a monkey and you had a cat and dog...Duck is one thing I have never cooked and also don't like ...may you have a great weekend...hugs and smiles Gl♥ria

What a lovely story! The best cooking is cooking from the heart and not some gourmet recipe we are all tempted to try at some point!

We live in the tropics, so our Thanksgiving is a picnic on the beach!

Have a great first weekend of Spring ~ Susan