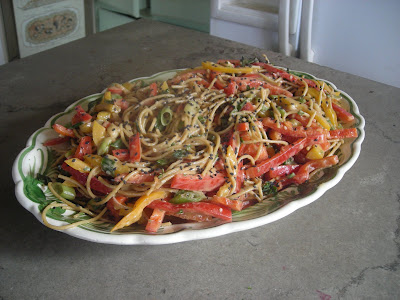 A pot luck dinner this evening (hamburgers and brats provided by the hosts) found me perusing cookbooks and the internet for something a bit different -- a bit out of the box (or at least the box that's often on the prairie) and so I came up with my take on The Barefoot Contessa's Crunchy Noodle Salad. 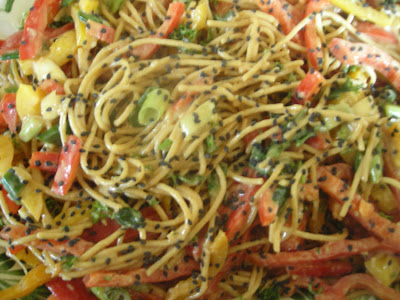 It's Asian flavored, it's yummy, it's easy to make (as all of Ina's recipes seem to be), and I could almost guarantee that there would not be a similar salad at the pot luck.

Bring a large pot of salted water to a boil. Add the spaghetti and cook according to package directions. Drain and set aside.

Meanwhile, bring another large pot of salted water to a boil, add the sugar snap peas, return to a boil and cook for 3 to 5 minutes, until crisp tender. Lift the sugar snap peas from the water with a slotted spoon and imerse them in a bowl of ice water. Drain.

Combine the spaghetti, sugar snap peas, peppers and scallions in a large bowl. Pour the dressing over the spaghetti mixture. Add the remaining 1 T. sesame seeds and the parsley and toss together.

NOTE: At my market, there were no sugar snap peas, so I added more green onion and a yellow pepper, sliced the same way as the red ones. I also used 1 T. black sesame seeds instead of toasted white ones to finish the dish.

It's a lovely salad and your pictures are beautiful. I'll bet there were no leftovers for you to bring home.

What a lovely salad and healthy too! Ina Garten is tops in my book (I love her home!). I agree with Mary, there were probaly no leftovers, just satisfied guests!!

I LOVE your blog! I read back about 7 pages and can't wait to finish reading it all!

Thanks for stopping by my blog. I am so thrilled that you did!

PS. I am adding you to my blog roll; I hope that is ok.

That noodle dish is so me. I make things like that all the time. Thanks for sharing. I will try this one. Thanks also for visiting and the imput you added to my post.

Sounds delicious! I love Asian salads. You wouldn't happen to have a good recipe for Japanese Salad Dressing like they serve at Stix would you? I keep trying and haven't found the right combination. Thought I might ask and see what you have in theat endless recipe file of yours!
Nancy :)

You have some very delicious sounding recipes you have shared. I will try some soon.

Thank you for your kind visit to my blog
I really appreciate it.

Have a blessed Sunday.
~Melissa :)

Thanks for dropping by and leaving your thoughts as to the porch railing! I love that we are neighbors of sorts! We actually live in De Soto (12 miles east of Lawrence) off of K-10.

My husband and I visited Ft. Scott on probably one of the hottest days of July one summer, but oh, how I loved it! Especially the homes, shops, and history!

Your reicpes sound declicious (even the substitutions) and I will definitely be back to browse more later!

Blessings from a fellow Kansan!