The Faeries have moved their Garden 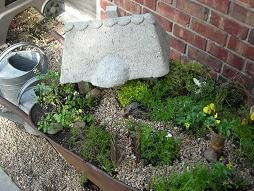 My faerie garden from last year -- with stone paths and flowers and herbs . . . . however, I awoke one morning to find that the garden had moved . . . 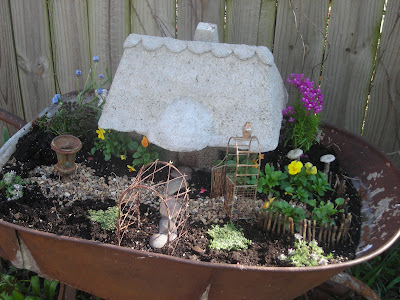 to another part of the garden and the cottage had even moved in the wheelbarrow. Paths and flowers have moved as well. 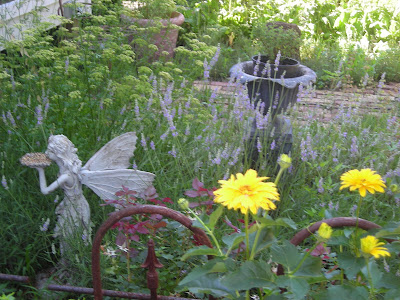 There are faeries in the gardens at Linderhof . . . and if you don't believe me, you'll see one . . . occasionally. 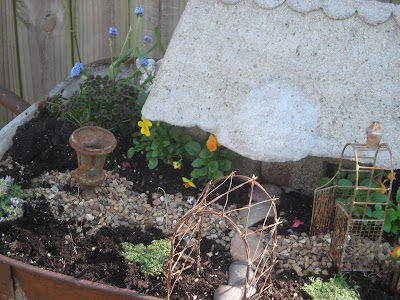 The cottage is so much better in it's new location and I do like the paths and plantings much better than what I did.


Who would have known that the faeries would have taken control and moved not only the garden but the cottage! 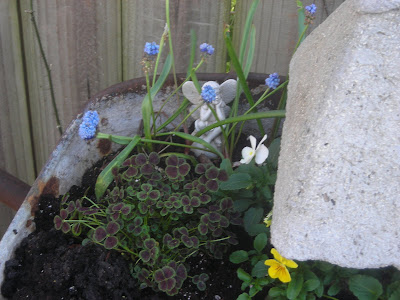 And if you look closely, often you'll find a fairie in her garden. Smelling flowers and awaiting the time that we mortals are back inside for them to do those things that fairies do!

I love Outdoors Wednesdays and this is my contribution -- many thanks to Susan at A Southern Daydreamer for hosting this event.

If you believe in faeries you'll understand the garden at Linderhof . . . if you don't, more's the pity for you're missing out on a magical kingdom!
Posted by Martha at 7:55 PM

Oh sweet! Wouldn't it be grand to see a faerie...

How incredibly cute is that? I have never seen such an adorable faerie garden. How creative. Amy

ADORE THAT COTTAGE!!! Where did you find that cutie? Your post was so unique. Thank you for sharing your photos. TOOOOOO cute!

I MADE the cottage -- it's hypertufa and not really that difficult. The class wasn't cheap ($95) but I've seen the same cottages for sale for $300!

Love this post and I HAVE to know where you got the fairy in the third pic. I think I have asked you that before and I love her.

It's a long ago Nell Hill's purchase -- alas, they are "long gone" but . . . my favorite garden spot has a similar one (made from metal) and much larger (Red Cedar Gardens) . . .

That faery is a favorite of mine and I was so happy that I got her.

This is so adorable!! loved it just loved it. Sue

What a cute post...love your faerie garden...its divine...

oooohhhh you made the cottage...wow, I love it..maybe you can give us a little tutorial ???

Oh my! Your fairies are strong little things, aren't they? I guess they just wanted a change of scene. How clever of them to move under cover of nightfall.

Your faerie garden is so charming ... and the little cottage is amazing! That must have been difficult to make.
So lovely -- what will the faeries be adding this year?
Cass

This is the first time I have had a tour though a faerie garden. Oh what fun!
Joyce M

Love it! So adorable!

Having been a Brownie, and then many years later, a Brown Owl, I most definitly believe in Faeries...also Sprites and Imps!
How lovely that the Faeries have been working in your garden. They must feel right at home at Linderhof!

I wish those fairies would come clean my house! When I was a child, my mom used to say that the fairies cleaned the house while I slept.

This is so cute! Great idea!Kathy

Your faerie garden is so cute. I have never seen one before, it is a great idea!

The little Faerie garden gate and trellis are great. Very clever and cute!

We used to have a local store that sold only fairies and stuff related to fairies. They also did kids dress up tea parties with you guessed it...fairy outfits. Such fun.

Good Morning Martha, What a charming little garden! I just was showing your fairy garden to my 5 year old grandson.....I think a fairy may be coming to live in our garden as well!.....Thank you for the inspiration!.....Heidi XO

it is sooooo cute! my little girlies would love this....we may have to start working on one today :)
chasity

What a fun garden you have! Those fairies are sneaky! ;-)

Cute and clever. That faerie garden is a special addition to your garden.

So cute, Martha! I gues you never can keep a faerie in one place! I can't wait to see more of your magical kingdom.

There's a thank you waiting for you at my blog :)

Your post took me back a few years to a magical time in life. Cute post and I loved your faeries!

What a cute little fairy garden! I've never seen anything like that. Very pretty!
Sandra

I loved you faerie post! How sweet and pretty flowers too :)

Charla @ For the Sake of Time said...

I love your sweet post. Are the little blue flowers grape hyacinths? I adore them.mmThank you for sharing.

Sorry I am late getting around to visit... I hope you had a Happy Outdoor Wednesday....and that you will participate again soon! Thanks for sharing your photos.~ Susan

Thank you so much for telling me about this on our blog. It is just so adorable and I am sure the fairies would feel quite at home here.