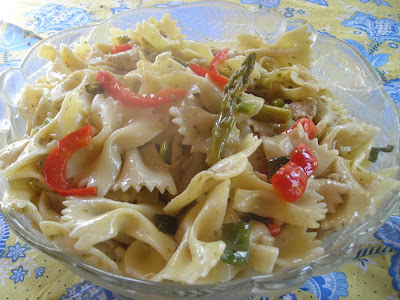 This is such a great dish for such a mundane name. It's easy and actually can be adjusted to what may be in the refrigerator. It's an oil and vinegar based salad so it's great to take to potlucks AND it can be a side salad if you omit the chicken. 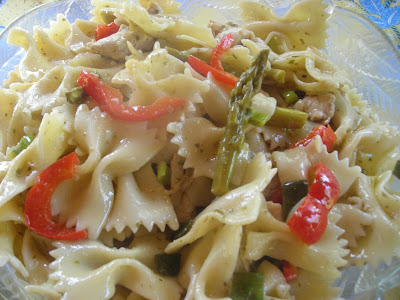 I like bow tie or penne pasta for pasta salads because they are "forkable" and much easier to eat than long noodle pasta salads. 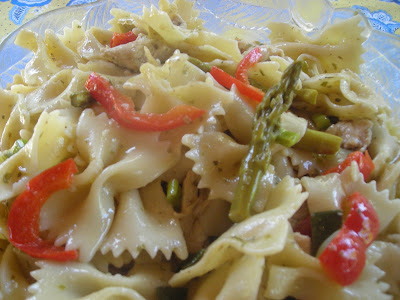 It's easy to do and except for the dressing, this salad doesn't have exact proportions. Red pepper, sliced thinly, asparagus, green onion (although I've used red onion when I didn't have any green) and, of course, chicken.

Mix all together and then pour over the raspberry Dijon vinaigrette. Toss until the salad is well coated. (And I like to do it while the pasta is hot for I think it absorbs the vinaigrete better.)

The vinaigrette is really tasty -- not only on this salad but on lettuce salads as well. It does make a nice quantity of dressing and sometimes I have some left over which I put in a Mason jar and refrigerate. (Note: olive oil will set if refrigerated -- just take from the fridge about a half hour before dinner)

Mix all ingredients together in a food processor until well blended.
Posted by Martha at 11:22 PM

That sounds delicious - perfect for a summer potluck or lunch. The asparagus is just starting here now - such a great time of year!

Looks very goos, I copied the recipe and will try it sometime.Hubby likes pasta salad and I never made it before...Christine

I love pasta salads too- all kinds.

They are great to have in the fridge to grab when you come in hungry from the garden. If I have really great tomatoes in mine- I sometimes skip the dressing altogether.

They are wonderful to take to parties- quick and easy and so pretty.

I'm always on the lookout for new pasta salad recipes. This sounds wonderful! I'll definitely try it this summer.

Love bow tie pasta - it's so cool. I made a raspberry vinaigrette this weekend for a salad. Perhaps we're on the same wave links. Have a nice Memorial Day.
Sam