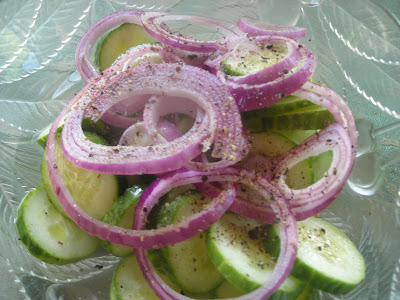 It's not summer but I had some English cucumbers and red onions in the larder and decided that we can "pretend" it is summer by having cucumber salad for dinner. 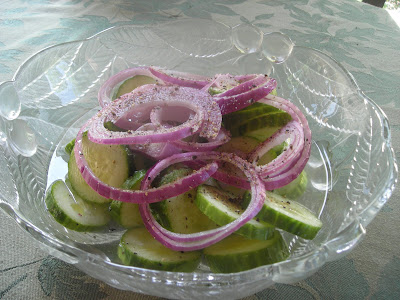 It's a salad of childhood summers. When cucumbers were plentiful, my mother would slice garden cucumbers, put them to soak in a salt water solution and leave on the counter for the afternoon. At dinner time, she would drain the cucumbers, add sliced onion, and white vinegar. She'd taste and sometimes add salt and always add a goodly amount of black pepper.

A favorite childhood memory is sneaking a cucumber or two while they were soaking in the salt water. THOSE were the best cucumbers!

When we had cucumber salad for dinner, my "dessert" would often be a slice of bread with a big spread of butter, cucumbers and onions placed on half the bread and then folded over. My childish version of a cucumber sandwich. Alas, without tea. 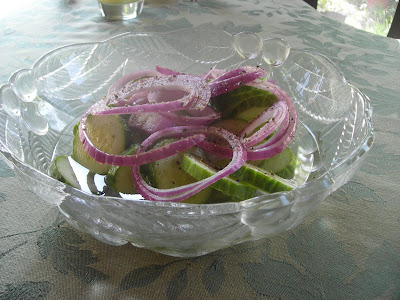 So while this is a salad reminiscent of the one my mother fixed, the ingredients are not totally the same. For pretty, I used red onion and I like the purple of the onion, the green and white of the English or hothouse cucumber and the big sprinkle of black pepper.

It did taste like summer and I can't wait until real cucumbers are available at the Farmer's Market -- for it's a salad we have often during the plentiful cucumber season.
Posted by Martha at 8:52 PM

My husband and I love cucumber salads but I must admit mine doesn't taste as good as the ones I had years ago.
I think the sandwich sounds even better.

Martha......This salad looks so refreshing and the combination of colours are gorgeous.

Thanks for sharing this summery salad.

Hi
thanks for visiting me on Tuesday
Tea, your photos are lovely!!!
Nice and Fresh
Best to you
kate

That is a gorgeous salad, Martha.

You have a lovely blog, and this recipe is one of my favorites for summertime!
joy c. at grannymountain

Oh, yes, that is very much a childhood memory. I even remember the bowl she always used. Thanks for that delightful memory.

As fantastic as this sounds, would in season tomatoes improve it a bit?