On a favorite blog, One Perfect Bite, I saw a recipe for "Hasselback Potatoes" with a soy glaze. Mary always has such great recipes but never having a traditional "Hasselback", I chose to make that version first.

I didn't know where the "Hasselback" came from. Was it a person from whom the recipe came (like my Welgenhausen Salad recipe -- the Welgenhausen's were unknown to me but the friend that I got the salad recipe from got it from the Welgenhausens and so their name lives forever as this recipe gets passed from one person to another) or was Hasselback a region of Sweden? Alas, no -- it was the Hasselbaken Inn in Stockholm in whose restaurant this recipe originated. 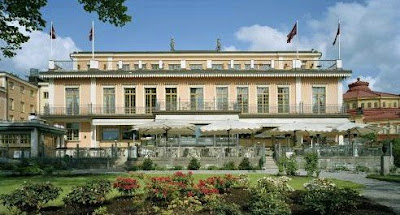 The traditional recipe is easy to find on the internet and it is an easy recipe. The hardest part (as Mary says) is the slicing of the potatoes so that you cut almost through but not quite. She uses the spoon method, I read about a chopsticks method and I just used my knife stopping at the proper place -- which worked well for me. 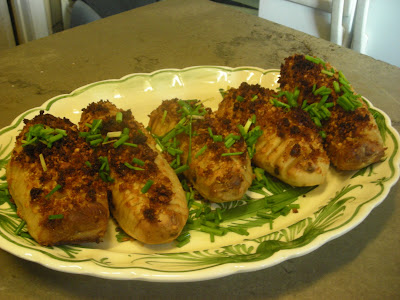 They're a pretty potato and look good on the plate. The recipe called for a sprinkling of parsley but I had chives in my herb jar and so chose to chop some of them up rather than go to the garden for parsley. 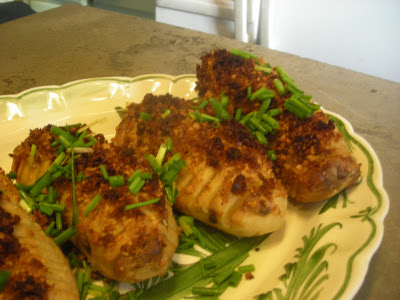 A topping of Parmesan and crumbs make for a crunch crust. 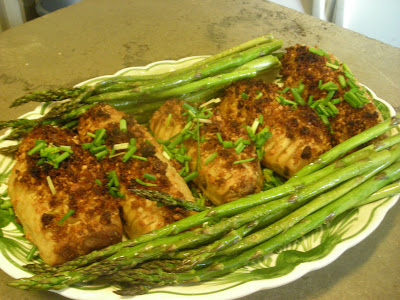 The best vegetable to accompany the poatoes (and the steak on the grill) is Farmer's Market asparagus.

They are almost no more trouble than baked potatoes. They will become a standard potato at Linderhof especially when we grill steak. And perhaps next time, I will try the soy glazed version.

4 baking potatoes
2 T. butter, melted
salt and pepper to taste
2 T. finely grated fresh Romano cheese (I used Parm)
1 T. seasoned dry bread crumbs
Preheat oven to 425. Peel the potatoes and place in a bowl of cold water to prevent browning. Place potatoes into a large wooden or metal spoon. Using a sharp knife, make slices across the potato the short way about 1/8 to 1/4 inch apart, making sure to cut down to the lip of the spoon, not all the way through the potato. The slices should stay connected at the bottom, and the spoon helps keep the depth even. Return the potato to the bowl of water and proceed with the reminaing potatoes.

When all of the potatoes are cut, place them cut side up in a shallow baking dish or small roasting pan. Drizzle with half of the butter, then season with salt and pepper.

Bake for 35 to 40 minutes in the preheated oven. Remove from the oven and drizzle with the remaining butter. Sprinkle cheese and bread crumbs onto the tops of the potatoes and season with a little more salt and pepper. Return to the oven and bake for an additional 20 minutes or until nicely browned.
Posted by Martha at 10:54 PM

Your potatoes look and sound delicious with the cheese and breadcrumb topping! Actually, your whole meal sounds wonderful. Nothing like steak on the grill and fresh garden asparagus. I love this time of year!

Martha, your potatoes look wonderful. Aren't they great? Lots of visual bang for the buck and your topping is out of this world.

You did a terrific job and these! They are beautiful on the plate too. Adding the asparagus is a great idea as well. I am crazy for fresh asparagus!

I can't wait to get to the farmer's markets around town.

I am a sucker for a great potato recipe and these look amazing!

What a nice way to do potatoes, it makes a great presentation. Thanks for sharing!