A Memory and A Recipe -- Putsch's 210 Spinach Salad

The Country Club Plaza was and still is, the toney shopping mecca in Kansas City. In my youth, upscale but local merchants filled the Plaza such as Hartzfelds and a neat toy store (Kansas City's version of FAO Schwarz)

But yet, there were more ordinary stores as well -- such as Sears, a bowling alley and a dime store (I think it was Woolworth but it could have been Kresge's).

It was my mother's preferred shopping area and it also was where our doctor's and dentists had their offices. My parents even banked on the Country Club Plaza -- at The Country Club Bank!

And because to my mother, shopping was an occasional outing -- to fill closets with school clothes, to replace worn linens in the linen closet, to do Christmas shopping -- shopping was an all day (or almost) affair and that meant lunch as well. In winter, she went alone, but in summer, we (my brother and I) got to go along -- and our favorite place for lunch was Putsch's cafeteria.

The name Putsch's was a well known food name in Kansas City -- not only for it's cafeteria but also for it's high class restaurant, Putsch's 210. We didn't lunch there but my parents did go there for dinner -- for very special occasions. And, before I was married, a very sophisticated date took me there -- my one and only time.

It was one of a handful of classy restaurants that served gourmet food. 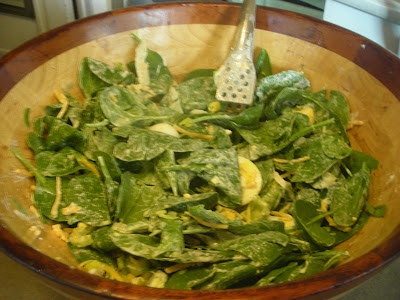 Sometime after the restaurant became Fedora's, the Kansas City Star published the famous 210 Spinach Salad recipe. I, of course, clipped it out. And made it a time or two or three.

But it has graced the pages of my personal recipe collection for almost 2 decades without being made again.

With baby spinach from the farmer's market, I decided to resurrect this wonderful spinach salad. It would go so well with the steak that husband Jim was going to grill for dinner. 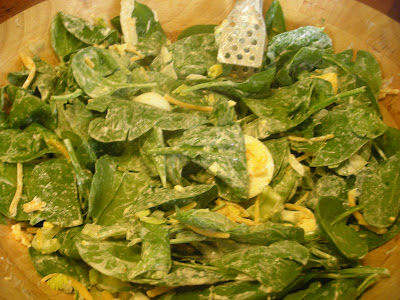 I think you can tell that it is a restaurant salad -- for it goes together easily and can be done in steps which is great for entertaining. 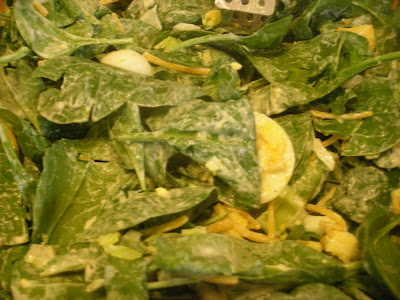 With Farmer's Market eggs, cheese, onion and celery, it's a very flavorful salad. The mayonnaise dressing which I enhanced with a hint of horseradish (rather than serving it on the side as it was done at 210) it was a great first course for the steak and vegetables to follow.

Wash spinach and drain well. Sprinkle salt over spinach. Mix vinegar and Tabasco sauce and pour over spinach and toss. Add celery, onion, egg and cheese. Blend in mayonnaise until everything is well coated. Serve with horseradish on the side.

NOTE: I mixed the horseradish in with the mayonnaise.

I eat spinach all the time. Your dressing sounds really good. That just might be on our menu tonight too.

That sounds delicious - too bad I already had everything in for our son's birthday barbecue. This looks like next weekend's feature!

I ate at Putsch's 210 and loved it. I also ate at Putsch's cafeteria on the Plaza where they had fabulous cinnamon rolls and a different version of Putsch's spinach salad,which I liked better than the 210 version. I am bringing a bit of KC to Arizona this Memorial weekend by fixing the salad and my favorite KC brisket recipe. Here is the recipe for the salad.
2-10 oz packages frozen spinach- Thawed and drained.
1/2 cup chopped onion
1/2 chopped celery
1 cup cubed cheddar cheese
4 hard boiled eggs
1 cup mayo
1/4 cup horseradish sauce
1/2 tsp salt
1/2 tsp tabasco sauce.
Blend and mix all ingredients but the spinach. Add spinach and chill 24 hours.

I remember Putsch's. I actually worked at Harzfelds for a few years. Thanks for the recipe. I'm making it for Easter dinner.

My Grandmother married Jud Putsch after both were widowed. Hey was a great guy. Thanks for the recipe.

My Grandmother married Jud Putsch after both were widowed. Hey was a great guy. Thanks for the recipe.

Thanks so much for this. I am the grandson of Pete Como - the long time (30+yrs) bartender at The Side Door bar next to Putsch's Cafeteria, and literally grew up in these places. Great memories. Even though it has changed greatly, I still love the Plaza and stay there every time i come home to KC. See you all next month! Terry Como

I too enjoy the spinach salad that my mom loved. However if I remember correctly, the recipe I have is from Putch's cafeteria. The second version on the comments is what I have with the exception of cubed cheddar. My recipe called for Kraft Old English Cheese shredded. Unfortunately the unique cheese in the blue box is no longer sold, except in tiny glass jars with a crazy price point. I now use Velveeta. We also always served the horseradish on the side (that may have been my mom's idea as she was not as fond of horseradish) and grated an extra hard boiled egg on top of the finished product. Just made it today as my husband loves it and deli spinach salads are not even close to the great flavor of this combination of goodness. Another great recipe would be the hamburger relish from Wolferman's Tea room. Anyone remember that one?

I remember ordering a spinach salad from Putschs cafeteria each time my Grandmother and I would take the Greyhound bus to Kansas City to shop.
I remember the salad being compact and rounded.
I clipped the original recipe from the Kansas City Star many years ago.
I'll locate it and post.


Garnish
10 lettuce cups
10 teaspoons grated Horseradish
The salad I ordered was very compact, and rounded, like it was dipped from an ice cream dipper.
I loved this salad when I was a child.

My father lovern Smith was the storeroom manager for putsches for many many years. The putsches had wonderful Christmas parties. In the 210 for employees children. Jud putsch very nice man

Thank you for sharing this recipe, a favorite of mine from years ago!!!