One of the best things I like about Spring is the first rhubarb at the farmer's market. I buy as much as they have for we love rhubarb -- in compotes, in crisps, in tarts.

Although it is really a vegetable, we treat it like a fruit -- and eat it as a dessert.

And as much as we like rhubarb by itself, we also like it with strawberries in crisps and tarts.

Crisps are easy for there is not crust to make and roll. I often like to serve them in individual ramekins. 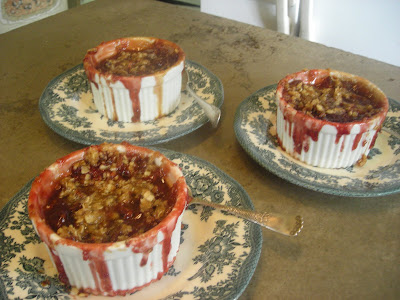 And since we are a family of two, you CAN make only two crisps if you want so there are no leftovers to tempt you. 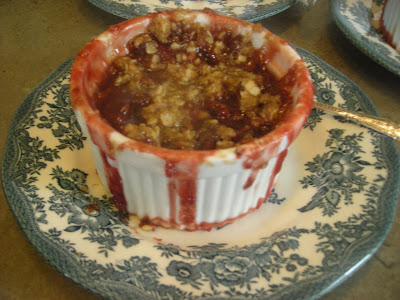 This recipe makes a big crisp, but I often fill two ramekins with the fruit (then measure it out) and adjust the crisp ingredients accordingly. And, of course, it tastes better with garden rhubarb.

New this year at Linderhof's garden are 4 precious rhubarb plants. What better than going out and picking your own rhubarb for a crisp or a compote?

Combine remaining flour, brown sugar, oats, nuts and melted butter. Sprinkle over rhubarb-strawberry mixture. Bake at 375 for 35 to 45 minutes until topping is crisp and brown.
Posted by Martha at 9:49 PM

I also love the strawberry/rhubarb combination of sweet and tart. These look wonderful, Martha.

I'm ashamed to say I have NEVER had Rhubarb! But this is the year I'm going to try it! I know to some people it's as common as apple pie, but I've been out of the loop, and with one of your recipes as guidance I'm sure it will be fantastic!

These look wonderful.........I love rhubarb also. Makes me want to go out and buy some rhubarb and make this recipe myself.
Thanks for sharing Martha.

I can't wait to make this...I always see rhubarb at the market, and now I have a recipe! I really love your church garden pics...they were lovely! Liz

Mine is just about ready to pick. Last weekend I bought some at a farmers market on the way to our cabin and made stewed rhubarb to have over vanilla ice cream. I hadn't done that since I was a kid.

My chives are blooming too. Great idea to put them in a vase.
Sam

I just bought a bunch of rhubarb today and this gives me a fantastic idea on how to use them. They look delicious!

Hello! Thanks for visiting my blog and your sweet comments. I had to come visit you, and am starting to dread it because you have some YUMMY recipes!!! OMG!!! My Mom loved Rhubarb. If she were still here, I'd make this for her and she would be so tickled.

And what also caught my eye were you dishes!! I love those! Do you have the entire set?

Loved your herb post too. COuldn't stop there though, had to scroll down and see more of what you had going on. I'm so glad I did! I'll be following along!
Have a great day! Karen