It's summer and time for outdoor parties. Often, the parties include an appetizer for the communal appetizer table. With summer, we yearn for something light but tasty as well.

I found this Greek Dip on line and took it to a "do" last week. I came home with an empty dish and rave reviews. To keep the dip even healthier, I chose slices of zucchini (sprinkled with pepper) and fresh green beans (blanched, shocked and sprinkled with sea salt) as well as whole wheat pita bread (brushed with olive oil and sea salt and warmed over the stove grate). 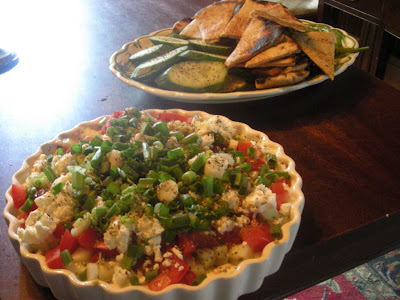 It's an easy recipe and the only adjustments I made to the online recipe was using plain yogurt instead of Greek (alas, the only Greek yogurt on the prairie was vanilla flavored!) and I omitted the olives to please Husband Jim. They would have made the dish even more interesting both in flavor and contrast -- but he doesn't like them! 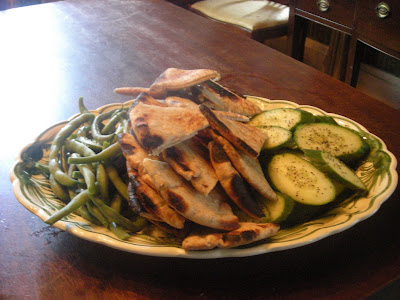 I put my "dippers" on my green and white Greek plate -- thought that was appropriate for my Greek appetizer. 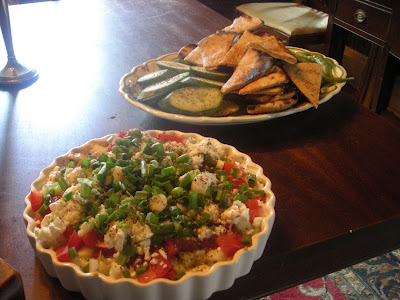 Instead of a pie plate I used a quiche dish. Will I make it again -- of course, I will. AND I think you can make a smaller quantity for less guests.

The recipe as posted -- with my changes noted.

Spread the hummus evenly over the yogurt. Sprinkle with cucumber, then with tomatoes, olives, feta and green onions. Sprinkle top with oregano.

Sounds really tasty. I'm about to have tons of cucumbers from the garden so I will test it out!

This looks wonderful, Martha!! Love your presentation. I adore Greek food and buy hummus a lot because it is not only a good dip, but healthy too!

I am going to try this for the big holiday weekend. I'm trusting that I should double the recipe!

This looks so appetizing and healthy, too! I would definitely use the olives :-)

Yum, this looks delicious and I think I may make this over the Fourth. So interesting that Jim does not like olives. Walter doesn't either and I dearly LOVE them????? I think I'll add them in anyway to see what kind of reaction I get. {{smiling}

Loved this post and thanks for the recipe. It will always be "Linderhof's Greek Yogurt Dip" to me. {{smile}}.

You can get something close to Greek yogurt by letting regular yogurt sit in a coffee-filter-lined colander in a bowl overnight. A lot of sour acid flavor leaves it with the whey.

Healthy and delicious is a hard combination to beat. This looks wonderful.

Copying this recipe! I am making my homemade hummus today and must try it in your recipe - it sounds delightful.