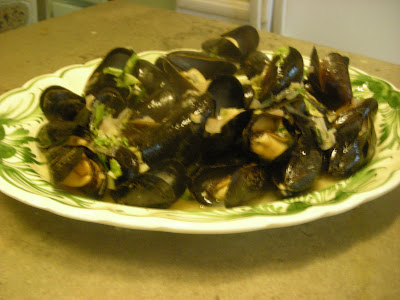 I was very picky about bi-valves all of my life -- while I LOVED clams and scallops, I would not touch an oyster or mussel -- no matter how it was fixed. To say I loathed them is an understatement. 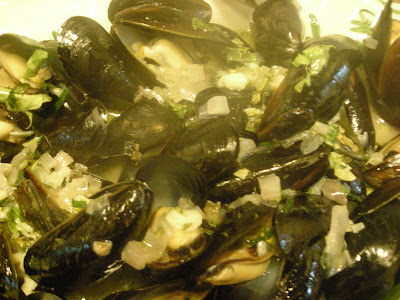 But we found ourselves in Belgium and on the plane going over everyone kept talking about "mussels in Brussels". One of those "must dos". Our time in Belgium was brief, most of a day. And it was in Brugge -- not Brussels. And the camera didn't work so all we have of that day is . . .

For dinner that evening, I decided that since we were in Belgium that I would have mussels. They were delicious and I became a mussel aficionado. 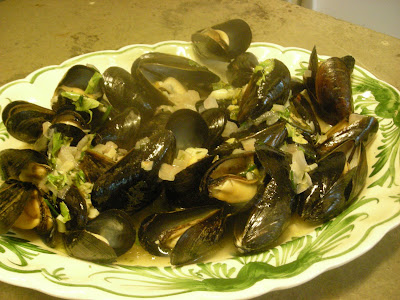 Since the prairie is far from the ocean, good seafood of any kind is rare. But a friend had these flown in and gave us a sack. We ate ourselves silly. The recipe, a favorite from a favorite book, The Cook and the Gardener. It's very good and very French.

Mussels with Garlic and Fines Herbes

Clean the mussels. Scrub them well under cold running water. Debeard them if necessary, pulling out any wiry fronds coming through the seams of the shells.

In a large pot or deep saute pan, combine the white wine, half the shallot and the bay leaf. Place the mussels on top and cover with a lid. Bring to a boil over high heat to steam open the mussels 3 to 4 minutes. You may want to give them a stir after 2 minutes to disperse the heat evenly among the mussels. When the mussels have opened (if there are a few that don't, that is an indication that they are dead or bad-- discard them), transfer them to 4 shallow bowls.

Strain the cooking liquid through either a coffee filter or several layers of cheesecloth into a clean pan. Add the olive oil, remaining shallots and garlic and bring to a boil over high heat. Reduce the mixture slightly; it will condense to an opaque liquid. Taste. If it's too salty, add a little water. Sprinkle the herbs and spoon the sauce over the mussels. Serve promptly with a tangy baguette torn into large pieces which you can use to soak up the broth when you're finished with the mussels.

I tried mussels, did NOT enjoy them. I don't think I can get PAST that experience to ever try them again. But, please, you go right on enjoying them for me, OK???

Loved this post. We do get mussels here in N FL but I admit to not being a fan. I don't even eat oysters??? However, I am the only one in my family who does not eat oysters. The recipe sounded interestiing.

Absolutely love mussels, and had then in Brussels over 40 years ago. We make them in a similar recipe as yours. So additive, and I find that mussels are rather inexpensive.

Great Post. You know, I have to say that I am not a big seafood person in general. I grew up having "catfish fish fry" family gatherings - and I remember vividly biting into the not-so-great portion of a catfish nugget - it ruined me. I've never tried mussels, clams, or oysters - but theres a big part of me that has been so terrified of the taste I've just not ever tried them. Easier to say: "I don't like them". LOL! I might just have to try them though, you only live once. I'll tell Scott he needs to take me to brussels so I can have mussels! :)

Finally! O how I love mussels. Can't wait to try yoiur receipe.
Thanks

A girlfriend and I are going out for Moules et Frites Thursday night after the art museum - I love them! What a nice story :)

I never tried mussels until we were in Lille, France. They were quite tasty, but have never had them here in the states. They just don't look as appetizing when served here.
If I am able to get some fresh mussels, here in PA ??? I will give this recipe a try:)

Thanks for sharing!
Crystal

Artie -- Scott NEEDS to take you to Brussels!

Of course you couldn't miss mussels in Brussels!
My first meal of mussels was at Chez Leon in Brussels in '80 - Moules Provencal. Over the years we visited this restaurant any time we were in Brussels. We took our youngest there in 2005 and introduced her to Moules Escargots - it doesn' get much better than that.
Thanks for the memories!

We really like mussels but we don't live near the seashore either so they can be a bit hard to find.
I like the tarragon you used - very interesting.
Sam

My husband goes to Brussels regularly from Guernsey on business trips and raves about the mussels. He keeps promising to take myself and the kids but we haven’t got there yet! I somehow do not think the children are interested in the mussels; more the chocolate and waffle shops he keeps teasing them with. I’ll give your tasty sounding recipe a go so I’ll get to finally try them ;)

Those mussels look delicious. We have an Italian restaurant chain around Atlanta called Carrabbas. They have great P.E.I. mussels cooked in wine sauce with fresh basil.

Thanks for your recipe.