It's Wednesday -- when we all go outdoors and share our favorites. Visit Susan at A Southern Day Dreamer to see what else is in the great outdoors this Wednesday.

I want to share my little town. It's on the prairie of Southeast Kansas and as Kansas towns go, it's a very old town for the fort was founded in 1842 -- and the fort led to the town. (History lesson: Kansas didn't become a State until 1862 and settlement wasn't prevalent until after the civil war.)

These are the officers quarters. It is a fort without a stockade because it is located on a bluff. The fort was abandoned by the government in 1853 and during the civil war one of the buildings was a union hotel while another was a confederate hotel. There were soldiers stationed here during the war.

Main Street which grew from the fort and this is what you see when you leave the fort. A quaint town with many local merchants selling everything from country decor to antiques to books to boutique clothes and Brighton jewelry.

A showpiece of the town is Gunn Park given to the city by Mr. Gunn to be forever used as a park. With two lakes and lots of shelter houses, it's a great place to walk Ollie and feed the ducks and geese. (A favorite past time) Mr. Gunn's son lived at Linderhof for a couple of years (as a renter -- not a buyer) and in the garden is one of the old fountains from Gunn Park -- now used to hold my sundial. 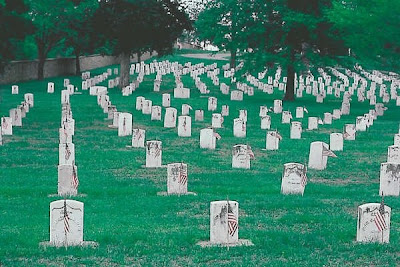 This isn't Arlington -- it our National Cemetery -- the first one. (Gettysburg is 2, Arlington is 3). In order that the cemetery would continue to accept burials, husband Jim and I donated to the fund which purchased additional acres. It gave us great pride to make sure that our veterans would continue to have a burial place in southeast Kansas.

And if you're ever in Southeast Kansas, stop by and see my town. If you stop by our chamber, you can see all on an hour tour -- past the Fort, into the park, down Main Street, and past our historic Victorian homes and historic churches. You learn the history of the town. The fact that the bricks at the Indy 500 "Brickyard" are our bricks. The trolley driver getting a kick out of telling people that those folks living within 2 miles of the cemetery can't be buried there. Many of the riders are aghast at how unfair that is and then with a gleam in his eye -- he tells them you have to be dead first!

The Trolley -- a fixture around town is named Dolly. It goes past Linderhof and if I'm outside, I always waive.

Our little town is Fort Scott -- named after General Winfield Scott. Who was so "insulted" by this small outpost in the middle of nowhere being named after him never came to visit. Another city named after him was Scottsdale, Arizona. I wonder if he would have liked that better?
Posted by Martha at 8:51 PM

What a charming and interesting town. I never realized that about Arlington Cemetery. That park looks beautiful. Thank you for sharing. laurie

It appears to be a lovely town with a very caring population. Blessings.

Oh thank you for the tour of your town. It looks like a great town to visit. Strange but true I enjoy strolling through cemeteries ..the older the better! Happy O.W. to you..

What a lovely town. I have been through many parts of Kansas but never there. Thanks for sharing your corner.

I have never been to Kansas, but Gunn is a family name!! Maybe I am mainline Kansan :) Loved the history lesson!

Beautiful photos and a very interesting place. Thanks for sharing.

Very interesting town you live in.. Huckleberry Prairie is having a hometown tour party on July 1st you should dif link this to that party.
Hugs,
Debbie

Happy Outdoor Wednesday Martha! You have a very charming town... I really enjoyed the little tour you gave us! Thanks for sharing your photos.~ Susan

PS Are you ready for your garden tour this weekend? Don't forget to take photo (please!)

Looks like a very sweet little town indeed!
Have a great rest of the week!
~Really Rainey~

That was a lovely post and your town sounds like a place worth a stopover. So many small towns didn't survive the development of the automobile - yours looks to have thrived.

great place to visit! so many beautiful places.. thanks for sharing and happy OW.

Hi Martha,
What a great post. You town looks so quaint. That is just great that you still have local merchants, alot of smaller towns have lost that era in time. Now its more like go to the Walmart. I support what local stores we have left?!?
Thank you for the rich history lesson, it so interesting to hear about all of our history.
Thanks for stopping by and visiting and I am glad my post brought back good memories:)
Crystal

Thanks for the tour! You have a lovely town. Has this always been your home?

So interesting!!! I LOVE the look of your town, and your history tidbits were so informative.

I love your charming and quaint little town. I am always fascinated by historical places...Christine

Wonderful tour! I grew up in San Angelo, Texas - which also had a fort, which led to it being a town, then a city. We used to tour the fort, and the old school house when we were children in the public schools as a reminder of the history our city had to offer. The fort looks very similar to yours ... though many of the original buildings are now gone. We had a trolly car, too! So many similarities ... makes me miss home.

Hi Martha, your pictures are amazing. I loved the tour...so interesting.

yout little town is wonderful, just beatiful, thanks for sharing

What a beautiful little town. So much character. The park looks so welcoming and I love your trolley named Dolly!

I've been to your town several times, but not recently. We enjoyed taking our kids to Fort Scott days when our kids were younger...I've wanted to come for another visit, just have to get my husband on board!
Thanks for the tour!

We are in your neck of the woods--15 minutes away on vacation. We are thinking about coming over to Ft. Scott for the afternoon to see the museum and main street. :-)

Carrie-- from the Art and Flair of Being Domestic