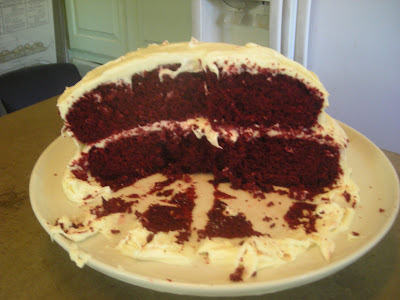 We all have a favorite cake. Husband Jim's is red velvet. With cream cheese frosting. When he was in high school, a teacher brought this cake and he thought it "the best"! So much so that he even asked her for the recipe. Which she gladly gave. 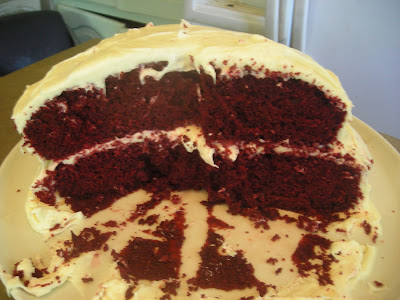 I got the recipe from his mother via his sister. Newly married, I wanted to make his favorite cake. Except that it called for 2 oz. of red food coloring. I was sure that his sister had written something wrong (for I only had the package of food color which had the four tiny bottles -- probably all 4 bottles didn't amount to 2 ounces.) and so I put in two drops. It wasn't red, so I added some more. Perhaps it was 20 DROPS. Alas, I used up that whole little bottle of food coloring and it wasn't really red.

I baked it anyway -- as was. It was good but my first cake was really a "Pink Velvet" -- not red.

I've since learned that sister in law was correct with the 2 oz. of red food coloring. I normally now keep a bottle in the pantry in case I want to make this cake.

Because of the red, it's a great cake for Christmas, Valentine's or the Fourth of July.

We've even split the batter and put one ounce of red food coloring in half and one ounce of green in the other. The red layer and the green layer separated by the creamy white frosting made for a pretty Christmas cake. 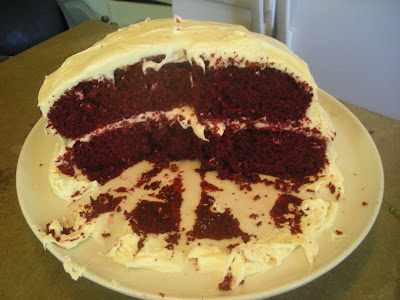 And although it IS Husband's birthday cake, we don't serve it JUST for his birthday. It's a great cake anytime.

In the bowl of a mixer, cream together the shortening, eggs and sugar. In a separate small bowl, mix together the cocoa and food coloring. Add the paste to the shortening mixture. Sift the flour and salt together. Add to the batter alternately with the buttermilk in 3 additions. Add the vanilla extract. Fold in the baking soda and vinegar. Pour the batter into 2 greased 9 inch cake pans. Bake for 30 minutes or until a cake tester comes out clean. Let cool on a cooling rack.
CREAM CHEESE FROSTING:

In the bowl of an electric mixer fitted with the paddle attachment, on low speed, cream together the cream cheese, butter, vanilla and almond extracts. Add the powdered sugar and mix until smooth.

i never would have thought that you needed to add a full 2 ounces of red food coloring either, until reading this. I guess you learn something new every day. I'll have to give this a try. How fun and yummy! ~ Robyn

I had to smile when I saw the title of this post........because a clerk at work brought in Red Velvet cupcakes this morning. Her mother had made them for her daughter's birthday, mailed them from Alberta, sending enough for three birthday parties! This was the first time I'd tasted this kind of cake - delicious! Can't believe that I now have a recipe without even asking!

Martha, Great idea to do a red and green layer! I will do that for Christmas. I enjoyed your comments on Julie and Julia. I have read both of the books and seen the movie. The scenes with Julia and Paul were my favorites. She was my inspiration. If you get a chance read one of the blogs I follow . . . thrice shy. She knew Julia.

My husband has this for his birthday every year. I have never made the cream cheese frosting for this. Always the traditional with cooked flour and milk into a paste and then whip in softened butter and powdered sugar.

Looks like Jim got into that cake before you could photograph it! I bet it tastes great. I love red velvet cake and I copied your recipe to print and try.

How good does this look. I'm sure every one at your table was a member of the clean plate club.

I love red velvet cake it's the best!and the first time I made it I only had the little box of dyes too. Yours looks great!

Hi Martha,
Now I know why a few crumbs from one of these cakes mixed with a few drops of water turned my white sink bright RED!!!

They are sinfully delicious, and somehow I imagine yours would be the best any of us have ever tasted!

Red Velvet is one of my faves also. First time I made it I was shocked at the amt. of food coloring, but amazed at how delicious the cake was!

Red Velvet Cake used to be VERY popular around here. We had one restaurant that made "the best". Unfortunately, that restaurant closed about three years or so ago. I have a red velvet cake recipe, but have never made it on my own. I only made it once with the friend who gave me the recipe and taught me how to make it. She put a cooked frosting on hers.
Thanks for sharing your recipe.