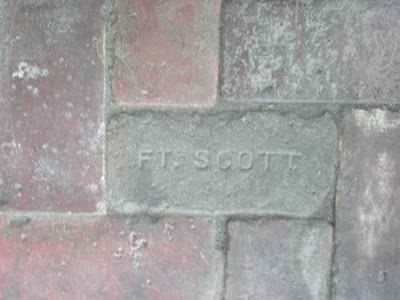 And as all brickmakers did in that area -- they stamped their name ON the brick!

And it isn't about a Food Trainwreck either -- cookies that came out as hard as those bricks and were inedible . . . 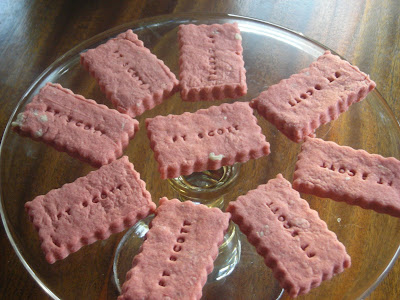 And like the real bricks imprinted with the name Ft Scott. 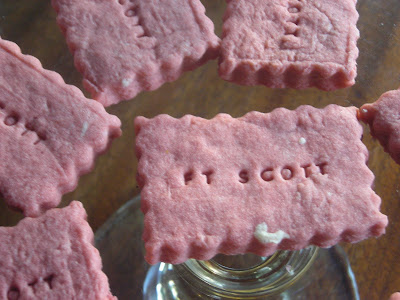 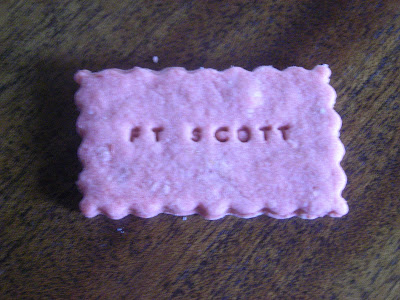 They're made with a special cookie cutter that I badly wanted but couldn't justify the price just so I could imprint "lavande" on my lavender shortbread. 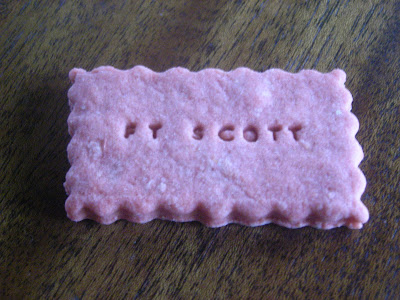 But our Tourists Visitors Center gives cookies away to our visitors. And what better cookie to give than one which reminds them of our brick factories and our brick streets. For THAT reason, I could justify the cost of the cookie cutter.

I do think the cookies have a good resemblance to the real bricks. And, when I make lavender shortbread, I can use the cutter to imprint them as well!

It's Foodie Friday, so please join Michael at Designs by Gollum and see what everyone has been cooking this week!
Posted by Martha at 9:57 PM

Loved this! Very interesting! Must be some cookie cutter :)

What a great idea!! You could make birthday cookies with this idea and cookies for a christening.

Great idea! They look great! Good morning and thank you for sharing!

Mine's over at my fam blog:

I just bought this cookie cutter and can't wait to use it. Your brick cookies are perfect for the occasion.

You bought it! Good for you and what a perfect use for it ;)

Lavender shortbread sounds delicious and I love your "brick" cookie cutter. You are the primo Fort Scott booster. I hope they appreciate you.

Oh Martha we can always justify a new kitchen gadget or tool. We have to eat don't we?

Have a great weekend!

What a cute idea!

That idea is pure genius! And what cute little brick shortbread cookies they are :) -Tammy

What a great cookie cutter! Wouldn't it be neat to have one with your name on it?

Your 'bricks' are wonderful. Hope you're planning on posting the lavendar shortbread... Nancy

Hi Martha,
What a clever idea! You're definitely a very talented lady!

It was really nice to hear from you today! Hope your weekend is an enjoyable one!

VERY cute cookies!! I have the Brigette cookie cutter and was planning on using it this weekend. Did you buy yours from that nice German man on Ebay? He sent me an email about some domino shaped and dotted cookie cutters he's started carrying. Haven't caved yet but oh my gosh they are sooo cute!!

Yes, I did -- he is nice and I was amazed at how quickly they came.

Very cute!
Most of all I like the way you justify your purchase .... sounds like a quite sensible and well-warranted purchase to me!

What a cute idea to give a brick shaped cookie to visitors. So clever of you~ ~Ahrisha~ ~