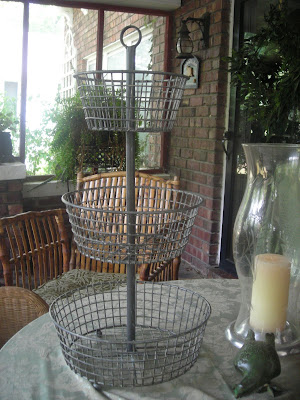 This wire basket fits in well at Linderhof. It has the look of age but yet is new. It can go inside as well as outside. And I love it!!!! First seen at the Minneapolis Smith and Hawken when we visited Daughter Sarah and her Andy over the Fourth.

I sat and debated about whether to purchase it -- I had found many other treasures and did I need it! The "didn't need" side of the debate eventually won and I decided that if I found that I really "needed" it that I could always order online.

By the time I got home, I decided that I "needed" the basket and so online I went. There it was but alas, there was another item I wanted to order as well and that company didn't take Amex and so I thought I would bring my other card up tomorrow and would order both items on it.

When tommorow came, I found out that Smith and Hawken was closing and that there were no more internet sales.

The need turned into badly wanted and had to have.

So I turned to my friends at a food board -- with my plea. Friends are wonderful whether they are internet friends or neighbor friends. Yes -- they lived near a S and H, would be happy to pick it up and mail it to me.

And so, the calling began . . . .the first store said they would ship, but alas, they didn't have it and so I called store after store with no luck. One store DID have it but said that they couldn't ship anything but furniture. I pleaded that I would gladly pay him if he would personally ship but alas, he said no and was quite rude about it. But, then, perhaps I would be rude too if I was about to lose my job.

Finally, in Birmingham I found one. A board friend in Huntsville had said her DD was going that weekend and so I said I wanted it (the last one, by the way), gave them my credit card and said that a friend would pick it up that weekend.

An email from my friend said that when her DD went, there was no package for me. And so I waited, thinking perhaps that they were wrong about having one but when my credit card statement came, there it was . . . so the Birmingham store I called once again.

Yes, my package was there awaiting pick up. No, they did not ship. I told the gentlemen on the phone my sad plight about being in Kansas, the store had said that there was no package for me when a friend went to pick it up and could he, please, personally mail it to me.

There must have been sadness or desperation in my voice, because he said he would. His name was Gene and he was the manager. About a week later it arrived.

And after I got it, I wondered why I ever debated getting it in the first place -- it is PERFECT! 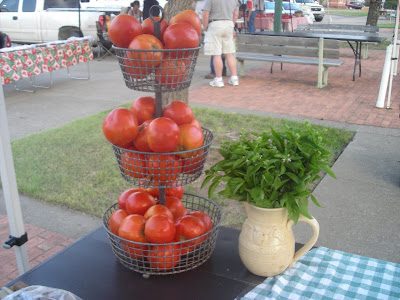 It looked great on the table when I did the Farmer's Market cooking demonstration. So great, in fact, that three vendors said how much they liked it and where did I get it -- it would be great for their booths. I smiled and replied that I got it far far from here. 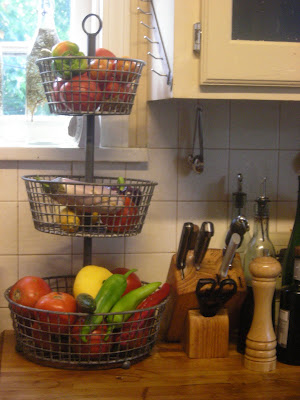 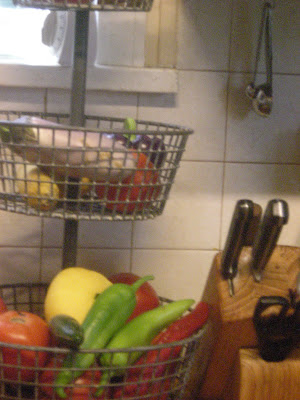 Close to the knives. 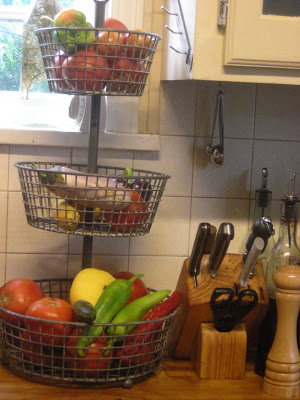 With the vegetables inside, it adds a bit of color to the kitchen and it's nice to have them so handy. For they're on the chopping block -- right next to the stove.

I feel silly that I passed it up in the first place. But it's nice to have friends and I want to thank Becky and her daughter for going out of their way for me. And, Gene, as well. Even though soon he will be without a job, he does understand customer service. I wish I could write him a letter of recommendation for his next job.
Posted by Martha at 6:21 AM

I love the basket, and I agree it is perfect in your kitchen to hold all your veggies. It is nice to find some people so willing to help isn't it. Gene will surely find another wonderful job. So glad you finally got it. Hugs, Marty

This is such a sweet story, Martha!! Makes me believe we should trust our first instincts...

You have some mighty nice friends and Gene should be commended. I don't think a letter of recommendation would hurt!

Love how the basket looks and of couse, how functional it is!

That's quite a story! I'm so glad you finally found kind-hearted Gene and it looks great with those beautiful tomatoes and veggies in it.

It's amazing how when something is hard to get we want it soooo much more :)

I love it when something I love comes with an interesting story, and your tiered basket has a good one!

Hi Martha--
Great basket! Glad you were able to finally get it. I can't tell you how many times I've wanted to kick myself for not acting on my first impulse to get something
especially at a garage sale or
thrift store. Someday I'll learn.
Enjoy your basket.
Melinda

I agree - it looks great with the vegetables in it!

You are going to enjoy that basket very much. Glad you landed it.

Martha, it was worth the effort! That basket looks like it was made for you and is right at home in your kitchen!

I want one too! I love your blog!

So glad you finally got the basket. It was meant to be and proves the point that we should follow our first instincts. Great story.

So glad you were finally able to get it. It is a fabulous addition to the kitchen. Shoot! Now I want one! Too late, huh? laurie