For dessert Saturday, I tried a new recipe -- Oma's Apple Cake from The Loaves and Fishes Cookbook by Anna Pump. It was easy to put together, had great flavor with the apples in the middle and was refreshingly non-cinnamon/non-clove. 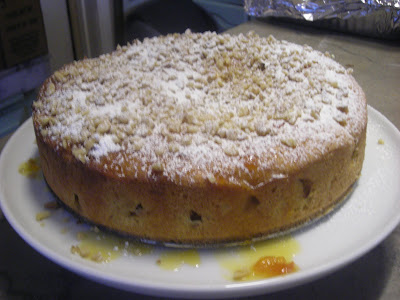 With a glaze on top and then a sprinkle of nuts (Anna's recipe called for almonds, I had walnuts in the pantry so used those) and then I added the shower of powdered sugar. 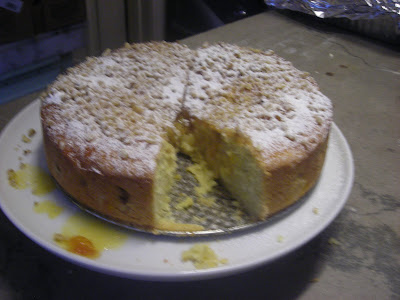 The apples are in the middle -- you put half the batter in then add the apple slices in a decorative pattern and top with the rest of the batter and bake.
Imagine my surprise when I read that friend Mary from One Perfect Bite had posted a recipe for "Apple Slice". Apple Slice was not my apple cake but it was a close cousin. Mary has great recipes and I thought it was quite a coincidence that she had a similar recipe. Which she posted on the Monday after I had made mine. Hers has a longer history than mine -- she's made it many times and this was my first. Hers is baked in a square pan -- mine in a round one. Hers is Scandinavian as is this one.
In the book, before the recipe, Anna Pump writes: "Oma was my Danish grandmother who developed this recipe and passed it down through three generations. She wouldn't have dreamed of adding Calvados, but it really does give the apples an added boost."
This cake is a keeper but it didn't last that long at Linderhof . . . . it would be as good for afternoon tea as it is for dessert.
OMA'S APPLE CAKE
(From The Loaves and Fishes Cookbook)
1 cup butter
1 cup sugar
rind of 1 lemon, grated
4 eggs
2 cups flour
1 t. baking powder
4 medium McIntosh apples
1/2 cup apricot jam
1 T. Calvados
1/2 cup slivered almonds, toasted
1 cup heavy cream
Preheat the oven to 350.
Cream the butter and sugar together in your electric mixer at medium speed until light and fluffy. Add the lemon rind. Add the eggs, one at a time Add the flour and baking powder and mix well. Spread half the batter in a buttered 9 1/2 inch springform pan.
Peel, core and cut the apples into eighths. Arrange the apples over the batter in a neat circle, filling all the spaces. Pour the rest of the batter over the apples, spreading it evenly.
Bake for about 50 minutes or until a toothpick inserted in the center of the cake comes out clean. Let cool for 15 minutes, then remove outer ring of the springform pan.
Place the apricot jam and the Calvados in a small saucepan and melt over low heat. Brush the warm jam glaze all over the top and sides of the apple cake. Sprinkle the cake with toasted almonds. Serve at room temperature with lightly sweetened whipped cream.
Posted by Martha at 9:01 PM

This apple cake looks good. But, I'm still thinking of the lemon basil pound cake. Bought some buttermilk yesterday just for making that.

Thanks for sharing these fantastic recipes.

This looks like a keeper Martha. I have never made this recipe even though I have her book. I will definitely have to make this soon.

I've got Anna's Loaves and Fishes cookbook and I confess I really haven't ever used it. This cake sounds wonderful and if you and Mary BOTH endorse it, then I definitely must give it a go.
Sam

Hi Martha--
Tis the season for apples.
It's funny that you posted about apples--I did a post on my blog today about apples. :)

I have the book too, but haven't tried this recipe. Thanks for letting us know how it turned out!

Dear Author www.linesfromlinderhof.com !
You have quickly thought up such matchless answer?