Last week was the film by Ken Burns, "National Parks, America's Best Idea" . . . we are fortunate here on the prairie to have not a park but a National Historic Site -- the old Fort -- the foundation of our town in 1842 when the Fort was built.

It was abandoned in 1853 although it did house soldiers during the Civil War.

Not all of the buildings were in good enough condition to be restored so some reconstruction took place.

It is a Fort without a stockade (as you see in movie westerns) but it primarily function when it was built was to keep peace between the Indians in Kansas and the citizens in Missouri. 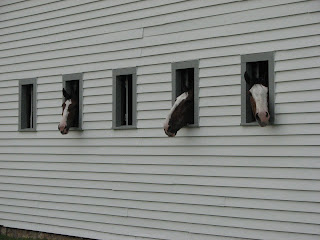 Two years ago we brought the Budweiser Clydesdales to Fort Scott. They stayed in the Fort stables while they were here. The stables that once housed Dragoon horses.
I'm sharing America's Best Idea on this Outdoor Wednesday. Stop by and visit Susan at A Southern Daydreamer to see what everyone else is doing outside.
Stop by The Fort Scott National Historic Site to learn more about our fort and how proud we are to have this National Treasure in our little town.
If you have a National Park or National Historic Site within driving distance, make a point to go and visit. They are truly America's Best Ideas and true American treasures.
Posted by Martha at 10:36 PM

I love history and the old houses and buildings. Very nice! thanks for sharing.

Thanks for sharing the photos and history of your town. I'm glad the buildings were saved.

You did such a nice job of presenting this, Martha. If ever I'm in the area I'll be certain to visit the fort.

I too love history. Thank you for sharing the photos and history of your fort and town. I am going to follow the link you provided to learn more.

Sometimes we are surprised to find National Historic Sites right in our own backyards! The best part is, they are free to visit (at least they were the last time we went), and the guides are well informed. Well worth seeking out. Some get very few visitors!

Great idea, Martha, to feature the Fort in your post. (Don't those Clydesdales look cute, poking their noses out?)

Most are not free -- and the fee is different for different parks (Yellowstone costs way more to visit that our Historic Site).

Ken Burns did a great job with his documentary -- but he always does.

Cass, those windows are for ventilation and light -- not for horses to look out of . . . but the Clydesdales were so much bigger than the Dragoon horses -- it was perfect for them!

We visited Ft. Scott the day we saw you. We loved the museum. Kiddo is writing a report about it right now for school. Love historical spots!!

I giggled when I saw the horses peeking out the windows. How cute is that?
Joyce M

Love this post. The Ken Burns documentary was really wonderful, and this looks like a great place to visit too. Love the shot of the horses. Kathy