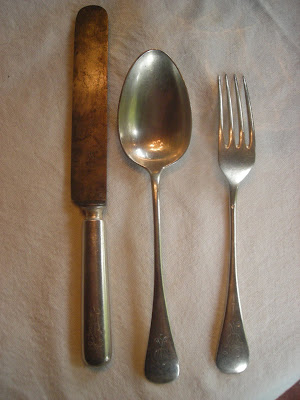 An old German which was found at an estate sale last week in Kansas City. A set (for 12 in the original box!) of German silver -- a tablespoon, fork and knife. 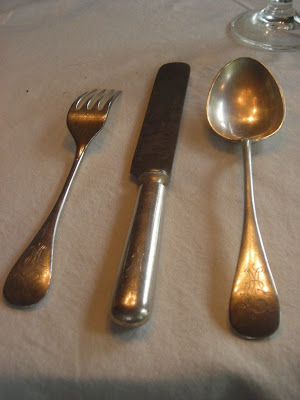 It's made by A. Krupp Berndorf -- it says so on the back although when I bought it I couldn't read it (I was so anxious to purchase it because I knew -- just knew-- that it was special that I didn't take time to examine it with my reading glasses on!) But I thought they were European rather than American -- because of the size of the forks, knives and especially the spoons! 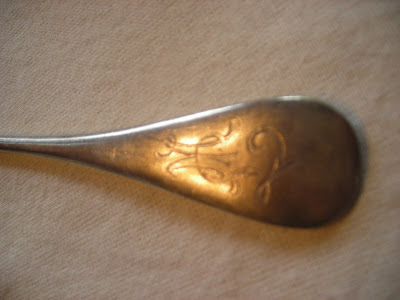 Each of the 36 pieces are engraved with flowery initials -- L and M. The forks on the back (for European custom sets the table with the tines down).
I knew there were great initials engraved on them . . . but in my hurry . . . . and so when I got to the car and found out that
a -- they were German (well, actually Austrian)
b -- they were engraved with my German grandmother's initials
I knew I had a true treasure. 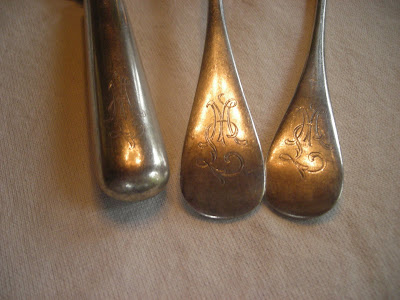 They did polish up nicely and I spent the evening after we got back home on the internet and found the company but I could not figure out exactly WHEN this set was made. I'm thinking 1880's to turn of the century but perhaps I'm optimistic and they are not that old. The case, however, has seen better days . . . and since so many Germans immigrated to America in the 1880's and 1890's (as my grandfather did) it would seem logical that the set, perhaps, was a treasure that someone brought over from the old country.
It's truly a treasure here at Linderhof. I shall treasure it as much as the original owners did! 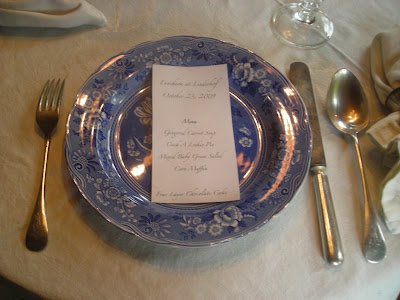 I think they set a handsome table. The tablespoon is large and so perfect for soup. It is a real soup spoon.
These are now our everyday cutlery. Who cares if I have to wash six pieces of silver after every meal -- feeling these wonderful pieces in my hand as I partake of a meal gives me a glow all over.
An unexpected treasure and a truly unexpected place and I might add for a really great price!
Posted by Martha at 5:43 PM

What a treasure, Martha! Congratulations on your find~~~

A true find. I am very happy for you. Now, I must check out my grandmother's silver which I have not done in years. Wonder what it looks like? I am thinking I should use it also.

I saw the M right away and thought they were perfect for you..the story only got better.They are a prize! And they suit you well!

What a great find!

Like your treasure alot!
My Father is full blooded German. So I'm about half German and so proud of this.
God bless,
d

Your title of "Old German" caught my eye as I'm half German and I'm sure old. I thought perhaps you were talking about me! LOL

Lovely to think that the treasured silver from some long-ago immigrant family has found a home where it will be lovingly used and appreciated.

Martha.....you always have such nice things with a beautiful meaning behind them. Thanks for sharing.

What a wonderful treasure to find at the estate sale! They look beautiful polished. I think using them every day is a wonderful idea and they will give your great pleasure. Enjoy htem!

What a wonderful find, Martha. I'm sure it will be treasured and well used while in your care.

What a beautiful find! I love old silver pieces.

My goodness, they are beautiful. Way to go!

That's lovely silverware! My dad was Austrian and he liked to lecture on how Germans aren't Austrians, LOL! If, for fun, you want to set the silverware in the German fashion, the knife and fork would both go on the right (fork to the left of the knife, knife with edge facing the plate), and the spoon goes across the top, spoon end facing left. :)