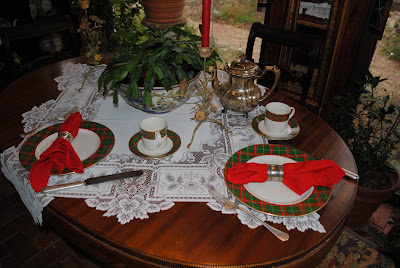 The first Sunday in Advent (usually the Sunday after Thanksgiving) is the time to get out the Christmas dishes. And except for soup nights, breakfast, lunch and dinner are eaten off the Christmas china. My new blue oriental bowl is filled with a non-blooming Christmas cactus. 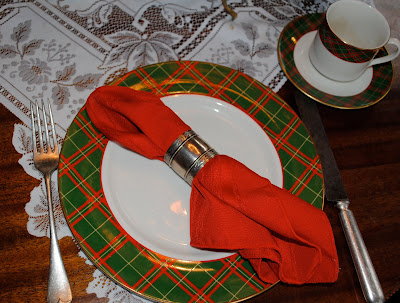 It's a pattern by Royal Doulton from the mid 80's (when, I think, lots of Christmas patterns began to be made (other than Spode Christmas Tree which has been produced "forever"!).
Plaid is a good choice for Scott Christmas china and the pattern name is Tartan. There were a series of three (I believe) that could be interchanged -- all with the same shades of red and green and all by Royal Doulton.
Our china has a history. I had wanted Christmas china but couldn't justify the cost to use just once a year (for Christmas dinner) and so I resisted. But then I read the story of a lady who brought out her Christmas china on the first Sunday in Advent and used it all during December.
THAT made sense to me and I could justify buying another set of dishes that I would use for a whole month! The search was on . . . Husband Jim did not and still does not like Spode's Christmas Tree so that pattern was out and then . . .
We took a trip to England and stopped by the "potteries" in Stoke-on-Trent. And there in the Royal Doulton "seconds shop" was the green and red plaid Tartan. At a really good price. So I bought eight plates and eight cups and eight saucers and the final price was $12 (can't remember how many pounds).
I hand carried them home.
Can you figure out why when the dishes were so cheap that I didn't get 24 or at least 12? Neither can I! I have, however, over the years increased my plates, cups and saucers to 12.
And we use them for the whole month of December! 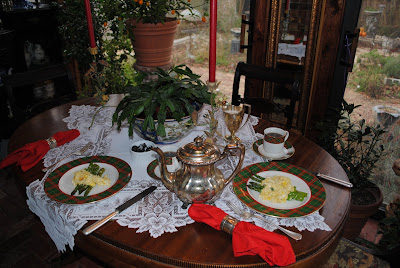 Napkins, too, are often red in December -- red ones look so good with the plaid plates. Husband Jim prefers mugs to cups but during December he knows that morning coffee will be out of the Royal Doulton. This breakfast it was served from my grandmother's silver coffee pot.
It's Thursday and time for Susan at Between Naps on the Porch to see all of the festive tablescapes that will be featured this Thursday. Join Susan and everyone else as we share our tables.
Posted by Martha at 3:12 PM

Oh neat, I am first to comment! I too have Christmas china that we haul out of the bottom of the breakfront on the First Sunday of Advent -- my mother gave her daughters and daughters-in-law service for 8 years ago. We use them -- and mine are getting crazed!

The service was expanded over the years to 12 -- then soup plates, and other pieces were added. I had guests for lunch on Saturday, and it was such fun to see how tickled they were by a table set with Christmas tree china!

LOVE the plaid that you have... and also love that new bowl. My Christmas cacti are mostly blooming already, a little ahead of schedule. Oh well.
Happy Christmas!
Cass

How pretty, Martha. I love the tartan pattern. Your table looks so pretty! I love the story about how you bought the dishes in England. Maybe you didn't buy more because you had to hand carry them home. That's a lot to hold for 10 hours!!

I have Christmas artificial China:)

One hundred yrs old..not really but almost all the yrs we are married.
Your Tartan is splendid and classic!!!
Why do you say non blooming Christmas cacti?

Mine bloom 3 times a yr and right now they are on their last stretch of show off before Christmas!!!

You cannot kill them with kindness Martha..Starve them:)

I love the idea of a china service just for Christmas. I haven't found one that I couldn't live without, although your Tartan would definitely catch my eye.

Very pretty dishes. I love the doily on the table.

Non-blooming because it didn't get enough darkness this fall. The little one in the spare bedroom did and is full of blooms. This one had too much light!

Love your 'Tartan' china, so festive and the story behind it! For $12 I would have hand carried them almost anywhere...what a steal. How sweet that you use your grandmother's silver coffee pot. Thanks for sharing.

So pretty and I love the story behind them. It's amazing how we can justify another set of dishes! Just use them for the whole month. It works for me!

Martha....Your table looks so pretty and festive. I love the story behind them.....you always have such nice things and well put together. Thanks for sharing.

We also take out our china on the first of December and use it through the middle of January. Your plaid pattern dishes are just lovely!
Susan

The plaid is wonderful pattern and you what a great deal you found in England!

Your December table is as beautiful as the blue and white you use for the rest of the year.

A very pretty table indeed. Neat idea to bring out the dishes the first Sunday in Advent and then use them for the month!

Martha, I would take a trip to London and hand carry the china home too! What a great deal and an even better story to go with it. Merry Christmas!

Good Morning Martha...this is just beautiful and the food YUM...Now I'm hungry for sure..I love coming by here and seeing all you do which is always awesome my friend...Hugs and smiles Gl♥ria