When It's Chilly Outside, It's Chili Inside 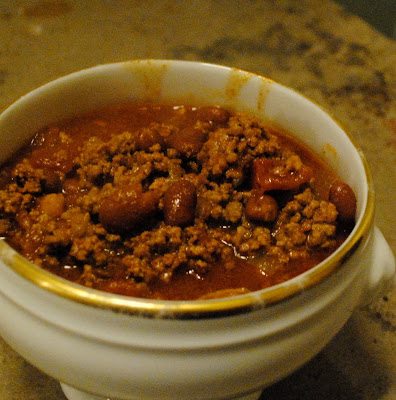 The prairie has not be alone in the cold cold of January 2010. With temperatures in the single digits and wind chills even colder, warm and comforting food is the order of the day.
We love chili. Husband Jim says there isn't a chili he doesn't like! But he especially likes my chili.
It's good made early in the day and allowed to sit and meld the flavors. It's even better the following day for lunch and even better the day after. Even though it is just the two of us, whenever I make chili, I always make a large "vat" of it! Baby, when it's chilly outside, there is nothing better than chili inside!
The chili is a simple recipe. At times, over the years, I've tried others but felt them too complicated and not that much better than just plain old chili. For every two pounds of hamburger, I dice an onion and a clove or two of garlic (depending on how big they are), and brown the onion, garlic and hamburger together. Once brown, I drain off some of the fat, add a can of tomatoes (diced, crushed, whole (which I break up with my fingers) -- it doesn't really matter -- they even make a can of tomatoes for chili), a package of Williams Chili Seasoning, and a can or two of chili beans. Let simmer for a while and then serve piping hot in deep bowls with plenty of saltines. Husband Jim likes his with chopped onion, shredded cheese and a few jalapeno slices. I'm more of a purist -- a big squirt of ketchup only.
Posted by Martha at 5:00 AM

Chili is definitely a cold weather comfort food for us too.

Love the leftovers as chili dogs, chili pie (topped with cornbread), or nachos.

I'm with Jim! I like all the accoutrements too!

Oh Ms. Martha.....I have ANOTHER chili recipe I will have to share with you that Dan the Man got from the Lenexa Chili Cookoff that we are so adddicited to we can't stop making it! I'll make a copy and pop it in the mail to you!

I love chili and it's on y list! I just saw a recipe w/ a cornbread topping? What do you think? Good? I'll try..Acorn Cottage you should share it AT Martha's too:)

I'm thinking a big bunch of cornbread would be good with this.

I love all of the accoutrments and spicy too!

Great recipe. I am craving a big bowl right now...how big is that vat? ;-)

I like chili any which way - in fact when I came home to an empty house after my trip to the mainland I doctored up a can of Stag chili doe myself and was quite satisfied.

I love chili in moderation :-). Most recipes just make too much for a small family. Your recipe looks terrific.

your chili looks yummy on a cold, snow-on-the-roadside day!

Oh... Your chili looks so yummy!! I haven't made chili for a very long time. Do you eat cornbread with chili?? That is my favorite.

I'll give it a try. Perfect for this time of year! I have to find the seasoning though.

wow that chilli sounds so good right now, i like the cheese and onion and peppers on mine too....

Hi Martha! Your chili recipe sounds almost exactly like mine! lol Nothing like it in this cold weather! Yum! Happy weekend...Debbie

Would you believe that I have never cooked chili? But I would like to try your recipe. It looks simple. Thanks...Christine

Chili is a frequent winter meal at our house. You are so right about it getting better the more the flavor melds. I've tried making it the day before we are going to eat it, but we always end up eating some the day I make it too. Your recipe sounds so good. laurie

Okay, now I want a bowl of chili!!! It is cold outside too, so PERFECT. And that creamy spinach below sounds amazing. ((thumbs up))

chili is my most fav thing to eat when it's cold and i hate to admit that i'm not the best cook in the kitchen but i think i might be able to pull this on off. thanks for the receipe. your bowl looks good enough to eat from here.
stay warm
lori