After Christmas, we fill the big blue and white bowl on the coffee table with homemade potpourri. It's winter potpourri for it smells of apples and oranges and cloves and cinnamon. It's full of dried apple and orange slices, strips of peel (both lemon and orange), bay leaves and spices. 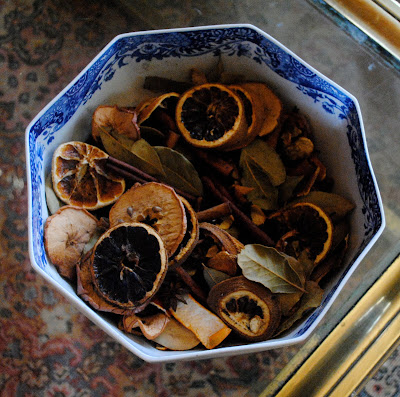 It's a project that continues for most of the year. If we're going to use an orange or lemon for juice only, we peel and leave the peel to dry to add to the potpourri. If we use an orange for zest only, we carefully slice the orange thinly after zesting and let it dry in the oven. When the apples come to the farmer's market, we pick a couple of small ones, slice them thinly and dry those in the oven as well.
The dried zest, the dried slice oranges and apples go into a big jar in the basement. Come the cool weather, I add the spices (whole cinnamon sticks, star anise, allspice and cloves) and the bay leaves and the oils and fixative and let it sit and blend.
When Christmas is put up, the potpourri goes into bowls around the house. I love the wintry fragrance of the potpourri.
Linderhof Winter Potpourri
Orange peel (in strips)
Lemon peel (in strips)
Dried slices of orange
Dried slices of apple
Whole Star Anise
Whole Cinnamon Sticks
Whole Allspice
Whole Cloves
Whole Bay Leaves
Orris root
1 to 2 ounce bottle with dropper of orange, cinnamon or Christmas oil.
I save my peels and or orange slices in a jar in the basement. When I'm ready to make the potpourri, I add the spices and the bay leaf. I use whatever proportion looks good. Some years I have more cinnamon sticks and less Star Anise. Mix all ingredients together except the oil. After you mix, add the oil by dropping it onto the potpourri. Trying to get as much as possible of the oil on the fixative. Use about 1/2 of the oil. After 2 or 3 days (or even a week -- sometimes I forget), you can check and see how fragrant it is, and if you don't think it's fragrant enough, add some more oil.
Let the potpourri sit for at least 2 or 3 weeks. (I usually make that a couple of months for I usually make it in October and let it sit until January). I try to stir it every few days but if it isn't stirred, it won't harm the potpourri.
If you can find small pine cones, they are a great addition as well.
Even though the potpourri is "inside" it is made up of things "outside" and so this is Outdoor Wednesday. Please join Susan at A Southern Daydreamer to see what everyone is doing outside this Wednesday!

Oh, I am definitely saving this! I always use pot pourri, but this blend sounds heavenly and looks like an easy ongoing project. Thank you!

I can almost smell this beautiful smell, but could you explain what you mean by the "fixative?"

Orris root. It helps maintain the fragrance. Everything I read about potpourri -- it needs a "fixative"!

Martha, you are just unbelievable!!! You are such an inspiration.

Martha, My mother used to make her own potporri but I have never made it. Actually, I do have some that my mother made many years ago and I just add oil to it from time to time. I would love to try my hand at making it with the oranges, lemons and dried apples. I can smell it now. I remember that my mother used oris root but I have no idea where you would get it???

Martha...I have made this for years, too. I also, sometimes, make a boiling potpourri that sends the most wonderful scent throughout my house; using much the same as the dried.
Wonderful outdoor post, my dear one.
xo bj

What a lovely idea for a pick-me-up after the Christmas decorations come down. It's nice to have something special to look forward to.

what a wonderful idea--i love potpourri and scented candles. thanks for sharing.

Mmmmmm, can smell your wonderful potpourri all the way over here. It smells divine!
Joyce M

Love it. Thanks for sharing.

What a fun idea. I never thought of making my own! Thanks for the recipe!

That looks and sounds beautiful.

What a lovely thing to look forward to in the long months of winter.

This looks lovely! I love the smell of apples and cinnamon. Definitely going to bookmark this so that I can try it for myself. Thanks so much for sharing!

Your special potpourri looks amazing & I imagine smells that way too.
Clever twist on the OW theme.
~Maggie~

Snow no More for Outdoor Wednesday.

thank you for the recipe for the pot pourri, I am always buying some here and there, so now I will just make some.
Betsy

Martha, this is a wonderful idea. I'm definitely going to give this a try. Have a great Outdoor Wednesday.

The scent must be wonderful! Great idea :)

What a wonderful idea - thank you for sharing!