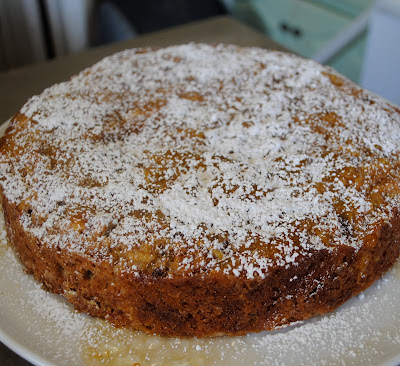 Desserts in the winter tend to run towards apples as they are the most plentiful fruit. There is nothing like a good apple cake with a cup of coffee to end the meal. Especially with a big dollop of whipped cream or a pour of very very thick Jersey cream. Heaven. 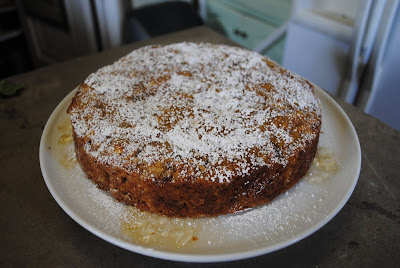 This apple cake is a favorite -- found in the pages of Victoria magazine long long ago. It is a winner and a keeper. It's a good spicy cake and the whipped cream (or cream) is the perfect topping.
Apple Cake
Spice Cake:
2 cups flour
2 t. baking powder
1 t. cinnamon
1 t. nutmeg
1/2 t. ginger
1/2 t. baking soda
1/4 t. salt
1/2 cup butter, at room temperature
1 cup packed brown sugar (light or dark)
2 large eggs, at room temperature
2 cups peeled, cored and finely shredded apple (I didn't peel mine)
1 cup sliced unblanched almonds (I used pecans -- the nut of the prairie)
2 T. brandy
1 t. freshly squeezed lemon juice
1 t. vanilla
Apple Glaze
1/4 cup apple jelly
2 t. brandy
Preheat the oven to 350.
Generously butter an 8 by 3 inch layer cake pan. Line the bottom with parchment paper cut to fit and butter the paper. Dust the pan with flour, shaking out the excess.
To make the cake: Sift together the flour, baking powder, cinnamon, nutmeg, ginger, baking soda and salt.
With the electric mixer, beat the butter until it is creamy. Add the brown sugar and beat until the mixture is light and fluffy, scraping the side of the bowl often. Beat in the eggs until they are blended.
In a medium size bowl, toss the apples with the almonds, brandy, lemon juice and vanilla. With the mixer speed at medium low, add the apple mixture, beating just until it is well blended.
Reduce the mixer speed to low. Add the flour mixture all at once and mix just until blended. Spread the butter evenly in the prepared pan.
Bake for 45 to 50 minutes, until the top of the cake springs back when lightly touched. Let the cake cool in its pan on a rack for 10 minutes. Run a thin metal spatula around the edge of the pan to loosen the cake. Invert the cake onto the rack, peel off the paper and let it cool completely.
To make the apple glaze, in a small heavy saucepan, stir the apple jelly and brandy over medium heat until the jelly is melted.
Place the cake on a serving plate. Spread the top of the cake with the warm glaze and sprinkle it with the toasted almonds. (I omitted the almonds as I had pecans in the cake). 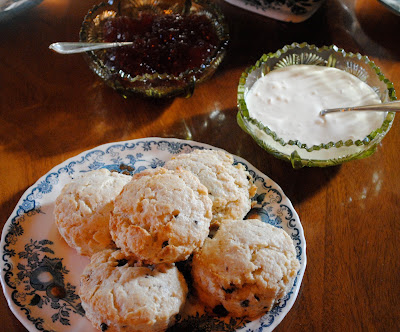 And for those who requested the scone recipe, it is below. From the Royal Crescent Hotel in Bath. It's been in my recipe file "forever" -- since not long after we got home from a trip to England where we did take tea at the Royal Crescent. How could I not keep the scone recipe!
Royal Crescent Scones
3 2/3 c. flour
6 T. cold unsalted butter, cut into bits
1/2 cup sugar
2 t. baking powder
1/3 t. salt
3 T. golden raisins (Optional -- I used currants)
1 to 1/4 cups milk, plus additional for brushing the scones
Preheat the oven to 400. Lightly butter a baking sheet.
Put the flour into a large bowl. With a pastry blender or two knives, cut the butter into the flour until the mixture forms a coarse meal. Add the sugar, the baking powder, salt and raisins (if you are using) and toss to mix.
Gradually add enough of the milk to form a soft dough. Turn the dough out onto a floured surface and knead it gently with your fingertips several times to form a smooth dough.
Roll the dough on a floured surface to 1 1/4 inch thickness. Cut out scones with a floured 2 inch biscuit cutter. Reroll the dough scraps once and cut out additional scones. Arrange the scones 2 inches apart on the baking sheet and lightly brush the tops of the scones with milk.
Bake for 20 minutes or until golden brown. Serve while hot and fresh.
And for those of you who were wondering about the Clotted Cream . . . it is easy but you need unpasturized cream (preferably Jersey) and a bit of patience. Put cream in a pan (I used a pint) and place in an oven heated to 180 for 8 hours. The cream needs to come up at least an inch in the pan to be successful. After 8 hours, cover and refrigerate for another 8 hours. After that second 8 hours, skim off the clotted cream. Refrigerate it until ready to use. The cream in the bottom can be used in baking. I found that a pint of cream made enough for 5 scones -- but we also had a big dollop on each one. If you weren't so "greedy" -- perhaps it would do a few more!
It's Friday and time to join Michael at Designs by Gollum to see what has been cooking this week!
Posted by Martha at 4:43 PM

Martha, thank you for this recipe. I am in a scone phase. I just make some creme scones this morning. And I think I'll make these tomorrow. Clotted cream i so delicious. I lived in England as a child and went to a boarding school, and we had scones at tea almost daily! I'll let you know how I did with the clotted cream. Thanks
Yvonne

Martha, I just today bought some double Devonshire cream-I think I see that apple cake in our future! Thank you
xoxo Pattie

I'm so very happy you posted this scone recipe. I love making scones!

I have an almost identical recipe for this cake from my Grandmother. It was one of her,(and my), favorites! Haven't made it in many years, will go and pull it out shortly. I got so excited I forgot to look at the scone recipe. Will have to go back now...

Both sound divine and perfect winter fare. Thank you for sharing :)

ooooh yummy ! thanks for both the recipes.... haven't made an apple cake for a long time... I'll have to post my Maple Syrup Scones one day soon ..I love scones ..so simple and yet so tasty.

The scones look to be the perfect thing for this time of the year, scones with homemade jams and hot tea or coffee...for a lazy brunch inside while I watch the rain coming down outside, thanks!

That apple cake sounds some kind of good!

The ginger and brandy must be great in the cake! Great idea!

Martha, with snow coming to Georgia today I am making those scones for tea this afternoon. I will light the fireplace and we will party! thank you, can't wait. (the apple cake is next)

Two wonderful recipes, Martha. Let's see...which one shall I try first? Your apple cake is my idea of a perfect dessert. Love fruit and nuts in the same recipe.

I just love Apple Cake and I will have to try Scones. It is on my list of things to do.

Oh, that Fresh Apple Cake looks delicious. I always enjoy apple recipes, especially in the fall when there is a plentiful harvest of apples.