The Plaza III restaurant has been in Kansas City -- forever -- or so it seems. At least as long as I can remember for it was often our choice when eating out at a nice restaurant when I was in high school. And it was the place to dine when your date wanted to show off.
Back then it was just " Plaza III". Now it is "Plaza III - The Steakhouse and Wine Cellar".
And with an upscale name comes an upscale menu. No soup or salad, entree and potato and bread for one set price as it was when we first started going there. No, everything is ala carte. But the ala carte portions are huge and can definitely be shared not only by your dining companion but by the whole table!
The first time I had the Plaza III Steak Soup, it was nirvana! It was heaven in a bowl. It wasn't my first visit -- oh, no, it was many visits later that first had the soup. And I only had it then because my date insisted that I should. (I wanted a salad!)
Everytime thereafter that we went there, it would be soup instead of salad. And then, just out of high school in my career girl days, I stumbled upon the recipe. It was so long ago that I'm not sure where but it has been a staple every winter since. 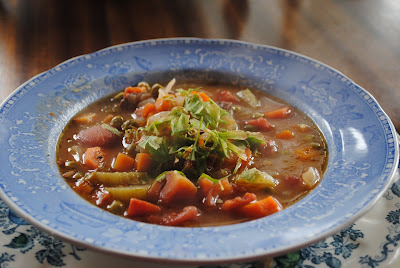 It's steak soup in that it is made from ground steak. It's easy to put together. Usually, I have the ingredients on hand (although in those instances, it's not ground steak but hamburger) and it goes together in a thrice. 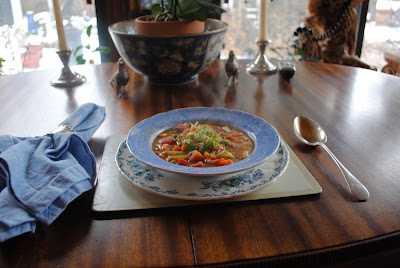 It makes a good dinner with some good bread and a warm dessert (think apple crisp with a scoop of ice cream). And it is a great lunch on snowy winter days. Which we've had too much of lately. 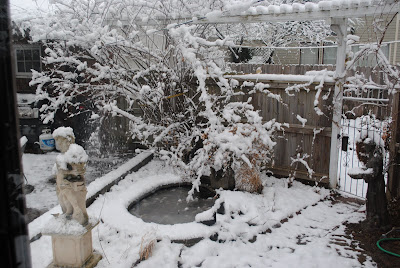 I have this recipe -- that's been in my recipe book "forever". I have another that can be done in the crockpot. It's Daughter Sarah's favorite homemade soup (mine's onion) and she makes it more often than I. It's easily "fiddled" with -- for you can add more of what you like or have on hand (of course, then it isn't the "real" Plaza III steak soup -- but it is still a good meal!) I think it tastes even better the day after it's made -- or even the day after that. That is providing, we don't eat it all at one sitting!
There are a lot of "imitations" out there -- so many restaurants now have their steak soups, but I've not tasted any that match the flavor of what I think of as the first, the original -- the Plaza III Steak Soup.
PLAZA III STEAK SOUP
1/2 cup butter
1/2 cup flour
8 cups hot water
2 pounds ground steak
2 T. beef bouillon granules
1 cup onions, chopped
1 cup carrots, diced
2 cups frozen mied vegetables
28 ounces canned tomatoes, diced
1 t. pepper (or to taste)
Melt butter in a soup pot that holds at least 20 cups. Blend in flour to make a smooth paste. Add hot water a little at a time. Simmer until smooth. Saute beef in a large skillet and drain off fat. Add meat, bouillon, all vegetables and seasonings to saucepan. Bring to boil. Reduce heat and simmer until vegetables are cooked. Do not add salt.
NOTE: The original recipe called for 1 T. Accent but I don't use it.
Posted by Martha at 5:27 PM

I love this soup....I make it all the time...We had dinner at Plaza lll last week for my birthday and it was wonderful....Pat H

Pat -- It's the PERFECT place for a birthday celebration -- in fact, I've had my share there!

Sounds delicious.....and pretty quick to put together. I made chicken soup yesterday - perhaps I'll try this for Friday night.

We really enjoy this soup also:)

Thanks for this recipe Martha! I've been looking for a great soup to sup whilst watching the snow and Olympics. I actually wanted to make Onion soup! I would love to have your recipe.

I love this soup! I actually have a big pot of it in my refrigerator right now. My husband and I had it fresh on Sunday afernoon, but it is even better after a few days age. Combine with a grilled cheese sandwich and there is nothing better in the world!

Yuuuuuu'um! I'm going to give this a go! I love soups and stews and this one looks incredible! Can't wait to try it! Thanks for stopping by the blog! The bathroom is getting there ... slowly, but surely as my mother used to say! :) Take good care! Artie

I just printed your recipe and will try it soon. It is similar to a vegetable beef soup I make, except for the butter and hot water... that might really change the flavor for the better! Oh yes, and using STEAK... that would improve things for sure! It looks so pretty in your blue dishes too! Thanks for the information you shared with me. I decided to skip the Blue Italian and go for the ones that are all different; they will be more fun to collect. You should do a post about collecting Blue Room!

This sounds delicious. Perfect winter fare. Our weather has gotten much better, but we are still dealing with rain and fog. Your soup will chase the blues away.

This soup sounds like the perfect "warm you up when you need it" soup for a cooler Fall day. BTW, we are expecting cooler temps here in our area too. Evening temps in the mid 60's and Sat. evening will get into the 50's. I am soooooo happy to have cooler temps. This has been a HOT summer. We've also had lots of rain and it has felt a little chilly. This recipe will be wonderful on those chilly rainy evenings so I plan to prepare it soon.