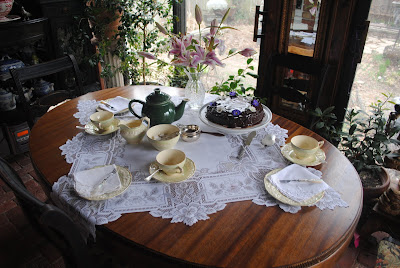 It's Saint Patrick' Eve at Linderhof and two friends have joined me for tea. An Irish Tea! 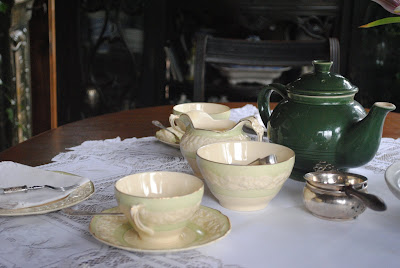 With my Emile Henry teapot (it's not Irish but is' green!) and an English tea set that is actually a pretty pale green and white -- not the beige and white that it looks here. 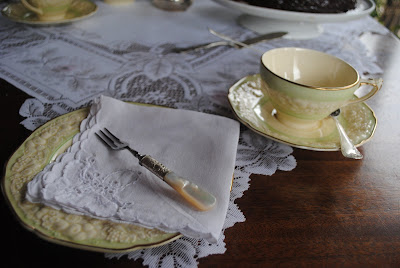 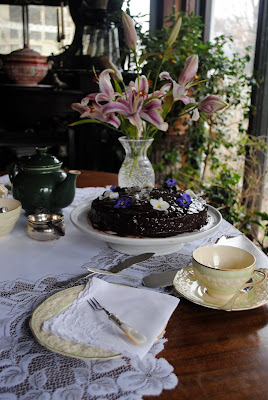 Flowers -- pink rather than green. Flowers rather than shamrocks but in a Waterford vase. 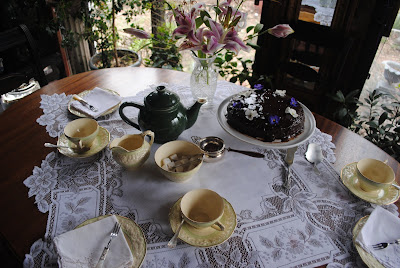 Cups of cups of Irish breakfast tea were sipped while we enjoyed the chocolate and Guinness cake. In the background, soft British folk songs by the Kings Singers.

It was an Irish sort of day at Linderhof on St. Patrick's Eve. And although none of us are really Irish, we did feel like we were in Ireland this afternoon.

It's Thursday which means that it's Tablescape Thursday at Susan's. Go over to Between Naps on the Porch to see what others have on their tables this Thursday!
Posted by Martha at 3:27 PM

I feel like I've just been treated to a tea party - Irish style of course!

I see the green in your china, beautiful. What a lovely way to celebrate.

Tha lace tablecloth is lovely as are your other items..

What a treat to share with friends. I'm sure they were bowled over when they arrived. Love the pearl handles on the dessert set.

It doesn't matter where it's all form, but it looks Irish!!!

Very elegant tea time. The lace is very pretty and I like the pink flowers with the green teapot.

How lovely is your Irish tea! Love the green - You remind me of Charlotte Moss - designer extraordinaire who sets the most wonderful tables. Take a peek at her book "Winter Houses" - a kindred spirit.

This is beautiful as always.

Lovely linens...I miss your blue, although green is my favorite color!

You've set another welcoming table. I can't think of another place I'd rather stop for visit and some tea.

How pretty. I just adore that lace! Just lovely.

Beautiful tea set! That cake sounds amazing. Your guests were fortunate indeed to have been there in person to enjoy your wonderful Irish tea party! Thank you for sharing it with us!
-bill

Okay I want that Guinness cake recipe! Your tea is very pretty and dainty. I love the cream china! Just beautiful.
Win Rachael Ray bake ware at my blog.
Thanks!
Sherry

I love the cup and saucers - such a lovely shade ... so soft. Beautiful table!

This is beautiful! (as always) and that cloth is so lovley! Thanks for your sweet visit this week from Tablescape Thursday -- and your pea soup looks wonderful too -- I've got some dried peas I need to make some soup here soon.