A year ago, I posted my first Met Monday post . . .
About these same urns.

Like last year, the urns with their tired Christmas greenery are just that -- tired! 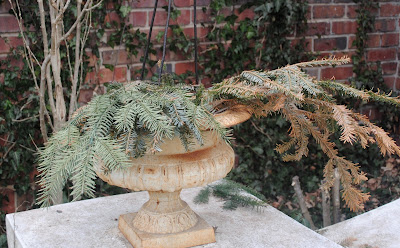 It did look more festive during December and even in January, the snow on the greens felt wintery. But now, our front entry urns are ready for spring. 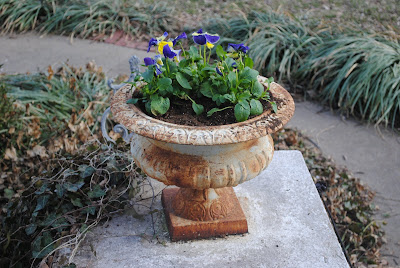 With spring comes pansies. One of my favorite flowers for they smile at you. How can you not like a flower that smiles! 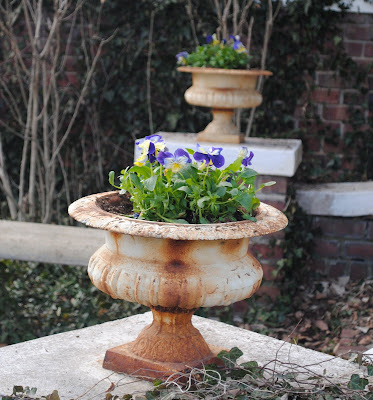 Nothing is leafed out on the prairie but with the pansies in the urns, it does feel a little bit of Spring as you walk up the front stairs at Linderhof. 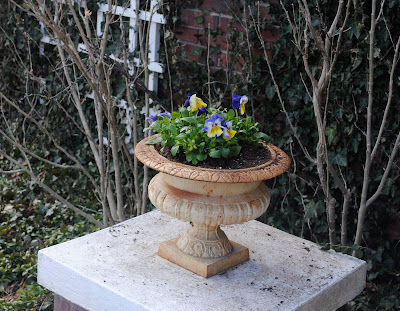 One pot on each side of the front steps. 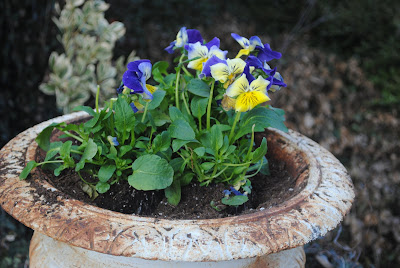 There were not flats at the nursery and I splurged -- I bought six pots for $4 each! Although they will give me many days of bright color and their blossoms will garnish food both when they're fresh and when they're sugared, it was a bit of a stretch. I decided with only six pots that I would use one type -- the purple, yellow and white variety.
I'll wait to plant the other planters until I can find 4 packs that I can buy a flat at a time. But these front planters really needed spring color. 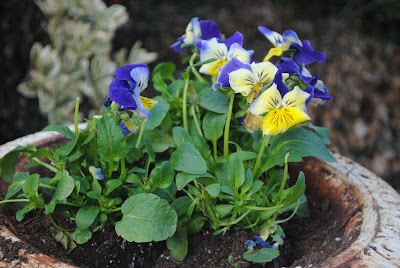 I especially like the ones with the "whiskers" -- for their smile seems just a bit bigger -- just a bit brighter! Pansies are great for this time of the year as well for they can stand a touch of frost and will go on blooming. They're very hardy and I think that they don't just say "spring" -- they scream spring!
Once again, this is my metamorphosis for Met Monday. It's quite a change to go from winter to spring! Please join Susan at Between Naps on the Porch to see what other changes were wrought this week.
And after an afternoon of tidying up the front of Linderhof -- banishing winter from all the pots even though I only bought enough pansies for the front ones -- is a cup of tea and a nosh.
The nosh . . . 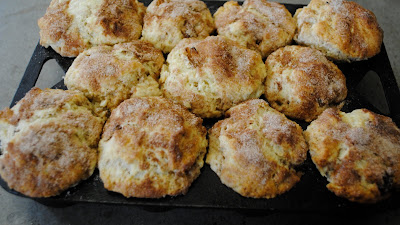 Raisin gems baked in a cast iron gem pan. They're really muffins but my grandmother always refered to the pan as a "gem pan" and the treats as gems. As a child, I thought I was lucky to be offered a fresh gem from the oven especially when there was butter to slather on them. I definitely thought them a gem of a treat and aptly named!
My neighbor also was doing front garden tidying and so I invited her over for tea and gems. 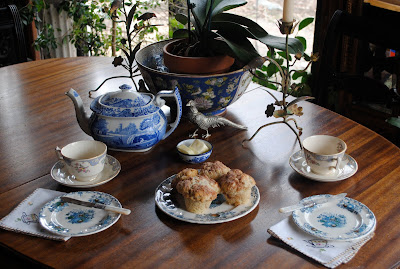 Eaten, not on the front porch but rather in the breakfast room where we watched the antics of the birds. 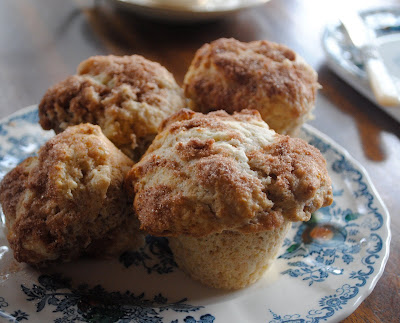 A small plate of raisin gems to be shared. 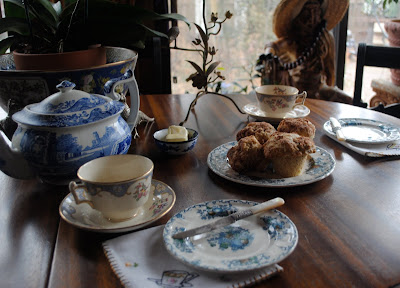 I always use my blue and white and I love to mix and match. The cups and saucers bought so long ago at an antique mall are blue with pink roses and birds which seem fitting for a cup of Spring tea. The tea plates and salad plate that the gems are on is Masons Fruit Basket which I also found at an antique mall. The teapot is Spode Blue Italian -- one of my beloved blue and white teapots.
With our garden chores done, we sipped and nibbled and visited the rest of the afternoon away.
It was a great way to spend a warm March Sunday afternoon.
It's also Blue Monday so visit Sally at Smiling Sally to see what other blues there are for this Monday.
The gems are easy to whip up and we make them often for breakfast when toast just won't do. They're good plain or with fruit added to them. (Blueberry is our favorite). Today, they were raisin and besides the raisins had a nice hint of cinnamon and a cinnamon sugar sprinkle on top as well. (And they can be baked in a regular muffin tin as well).
RAISIN GEMS
1/4 cup soft butter
1/3 cup sugar
1 beaten egg
2 cups flour
4 t. baking powder
1/2 t. salt
3/4 cup milk
1/4 cup sour cream or heavy sweet cream
1/2 cup chopped raisins
1/2 t. cinnamon
Topping: 1 T. sugar and 1/4 t. cinnamon mixed together
Cream together the butter and sugar and egg. Sift the flour, baking powder and salt together. Add to the creamed mixture. Then add the milk and sour cream, mixing well. Add raisins and cinnamon and mix again. Spoon into buttered gem pans. Sprinkle the top of each gem with the cinnamon sugar mixture. Bake in hot oven (400) until brown.
Note: These can be made plain or with the addition of fruit (fresh or dried) or you can even fill the pans half full, add a teaspoonful of marmalade (or jam) and add more dough. Dust these also with the cinnamon/sugar mixture.
It's the first Tea Time Tuesday at Lady Katherine's. Join other tea drinkers this Tuesday for a cuppa!
Posted by Martha at 2:39 PM

The scone recipe was such a hit during our brief 'snow day" that I'm definitely going to have to bake these to celebrate Spring!

Hooray for spring and pansies! Ours are in pots now on the front porch and the back patio, with a few more in the ground in front. This always makes me very happy in March!
Francie

I'm so ready to plant pansies. You are ahead of me in getting them planted. Love the purple color. Herbal Blessings, Mandy

Pansies, oh how, I love pansies! Dot has a cute planter by her front door and I am ready to put pansies in for her! Maybe next weekend. It is still too frozen out here on the plains for mine. Thanks for the breath of spring. ♥♪

Lots of welcoming signs of spring here! I always see a recipe as agift - my printer is going! Thanks so much!

So pretty, Martha- and the gems and their story are charming. Thank you for a lovely post
xoxo Pattie and Allie

Your gem/muffins look delicious!
Drinking tea and visiting with a neighbor sounds like a perfect way to spend a Sunday afternoon.

love your table setting and I must try making those gems.They look yummy. Thank you for the recipe.

Love the Blue and White dishes and My, those scones look so yummy!
Debbie

such delicious treats, the pansies are beautiful!

Building Memories Together for Blue Monday.

I dearly love my visits here...your home is so pretty. I adore the outside of it.
The pansies are just perfect for this time of year....and I know your neighbor LOVED having tea and gems with you. Thanks for the recipe...sounds delicious.

The pansies are wonderful. I am looking forward to it being safe to plant here.... have to wait until May :(

What a lovely way to spend some time with a neighbor, Martha. Happy Blue Monday.

I love pansys too, they are such a happy flower! Thank you for sharing yours.

You always have the most inviting posts! Your collection of clue and white is gorgeous, and I love that you use it all the time.

The pansies are beautiful! I am eagerly awaiting spring here so I enjoyed seeing the flowers here!

We have to wait a little longer for pansies here....but not for your gems! I can do that today!!
~Nancy

Your pansies are beautiful. I bet visitors walking up to your home are enchanted by them.
Blessings!
Gwen

Oh Pansies! I haven't found them here yet -- last year my March pansies were blooming all thru the summer! Now I am challenged... must find those pansies
Cass

I love the rustic look of these muffins... what I always strive for in my muffins. I don't like them to look like cupcakes.... must give these a go.....

Oh, the pansies are beautiful!!! I'm just hoping to get rid of some snow soon and see green grass someday, flowers would be a plus. The nosh looks great also, love all the raisins!

I love pansies , too!
Blessings,
~Myrna

Oh, I love pansies! Now you have really got me thinking SPring!

What fun I had today! Seeing the wonderful makeover with the urns to pansies! I love it that you and your neighbor were working outdoors and came in to rest with such a charming Tea! You are so right your Teapot is beautiful! I love how you mixed in the lovely different plates and cups!
Love the Nosh! I never heard of them. I would love to see the cast iron gem pan! I thinking I have one, that I never used! I want to try this wonderful recipe! Thank You so much for joining for my 1st Tea Time Tuesday! Hope to have many more! I also hope to see your pan and gems again!

Your pansies are a refreshing site. I need to get busy and plant! Your raisin treats look absolutely delicious.
XX00

Darling, thank you for allowing me to browse through your interesting posts and lovely photos. I enjoyed my visit and taking afternoon tea with you and I look forward to my future visits.

Wow what delicious recipe. I do so love pansies. Their little faces make me happy.

Lovely post - spring is in the air! Love the pansies and your tea setting is so pretty - beautiful teapot and cups and the raisin gems look awesome.