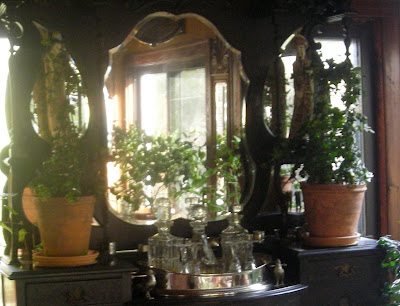 The breakfast room in winter holds plants -- and the sideboard doesn't escape it's bit of greenery. My two ivy topiaries are on each side of the sideboard. Two different kinds of ivy and two different kinds of topiary forms.
I've not been very good at toparies until these ivy ones. They weren't purchased as toparies but, rather, are home grown.
The one on the left was a wee plant when a friend gave it to me. I had an iron form and stuck it in the pot with the plant. It grew and thrived outside and surprisingly, it liked the sideboard in the breakfast room this winter!
The one on the right is just ivy and another form that I had in the garden. And like it's "buddy" -- it's grown and thrived.
I had to keep trimming them both to keep them in bounds!
Soon it will be time to take them back outside for the summer.
And in the middle -- our Waterford decanters. Bought one by one -- the first I was so excited about -- and the other two were found at bargains over many years.
It's Tuesday which means that it's Tabletop Tuesday with Marty at A Stroll Thru Life. My sideboard is not a table but it's a top!!!!
Join Marty and see what other tabletops there are this Tuesday!
Posted by Martha at 5:38 PM

Looks like your ivy is thriving. Love the sideboard, it's a great piece of funiture and the Waterford decanters and silver tray are fabulous.

Martha, where DID you get that sideboard? I fall in love with it every time I see it. I have a topiary tale as well, it involves draping vinca over a dead evergreen that didn't quite take to The Ranch.

I agree- I do love your sideboard! I, too, treasure my Waterford and your topiaries are just wonderful! I haven't had tremendous luck with those
xoxo Pattie

I love the look of topiary. Something that I enjoy is a stephanotis plant wound onto a large round form.

That looks gorgeous. I haven't had much luck growing ivy in pots...

I love this! Now you're are teasing us by not showing very much of this gorgeous sideboard.
Be a sweetie,
Shelia ;)

I'm envious. I love ivy and I've attempted to pot it and grow it in my house but both times my plants have died. To much water?

Hello Martha,
I am impressed by your ivy topiaries. I am a well-known, inadvertent topiary murderer, despite my best efforts to the contrary. The sideboard looks marvelous. Reggie

Keep up the good work, I like your writing.

I love your plants AND the beautiful sideboard.
xo bj

I love topiaries but have had no success with them. I guess I need to try ivy. Thanks for the inspiration.

Your ivy topiaries are gorgeous on you sideboard, Martha, and the Waterford decanters...so beautiful.

Those topiaries are wonderful! I had one, but it eventually died. Now I want to try my hand at making one myself!

Your sideboard is gorgeous and I love the topiaries. Great Tabletop Tuesday post, Martha.

That is absolutely gorgeous!! Love the sideboard AND the topiaries are to die for!! I have thought about trying to do that. I have a couple forms, but have not been brave enough to try. Beautiful!

Your sideboard is stunning!!!! I love the topiaries. I just can't get one to grow at all. YOurs look fabulous and perfect for the sides. The decanters are gorgeous in that fabulous silver tray. Such a beautiful vignette. Thanks so much for joining the party. Great eye candy. Hugs, Marty

What a beautiful piece! I love your decanters too.

Love you sideboard... especially the decanters. I collect them too.

Your sideboard is lovely with its gorgeous green topiaries. I voted below and will try to return each day to stack the deck for Fort Scott. I hope you are having a great day. Blessings...Mary

I love the combo of the green, the glass, and the mirror--so homey!

Really glad to get into this forum
It's what I am looking for.
Hope to know more member here.

Hi Martha -- wow your ivy looks so healthy. I have tried ivy indoors, because I LOVE it, but after 6 months or so it's starting a slow and terrible demise!
Waterford decanters? Oh, swoon! I have NO Waterford at all! My sister has zillions of wineglasses, brandy snifters, champagne flutes, goblets --her grandmother-in-law bought them for every holiday for her. AND gave her diamonds. Who gets a grandmother-in-law like that? Well, my sister. Not me!

Beautiful sideboard; love the size! Dion says Hi to Oliver. (Dion was hiding under the table when I took my pictures for today's post -- so funny, you can just see him between the table legs!)
Best ... Cass
PS The Staffordshire dog is one I got for 25-cents! It's got a little vent hole in the back which I read is an indicator of age, but -- I just like how it looks!