It's A Lilac Year 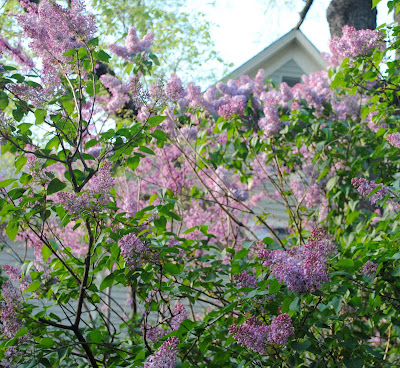 It is definitely a lilac year. The bushes are filled -- absolutely filled -- with blooms and the fragrance as you enter or leave by the back door is heady! For there are 3 bushes that line the drive and they are a mass of lilac.
They're the "children" of some forgotten bushes at an abandoned house in Nevada, Missouri, and after we moved to Linderhof, I would pick the blossoms off of the bushes and one day I got brave and dug up three starts. (Yes, I know I was trespassing -- but no one appreciated the bushes and I certainly did).
Two of the bushes I planted between our driveways and the other by the back window of the dining room. They grew and flourished. And they bloomed -- but never as profusely as in 2010 -- A Lilac Year. 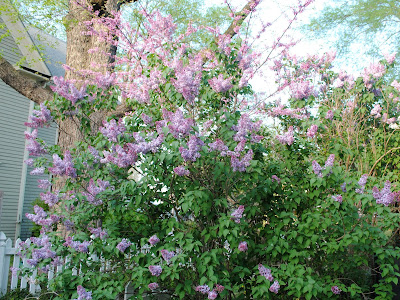 The third bush that lines the drive is a descendant of the lilac bush that was under the bedroom window in the apartment that my parents lived in when I was born. A start was taken from that bush when my parents moved into a house across the street and when they moved to suburbia six years later, a start of that bush went with them.
I got a start of the suburbia descendant the year my mother died. The following year, this wee bush bloomed -- one bloom. I think it was a message from my mother. For it didn't bloom again until it was of blooming size.
It's a big bush now and this year, it's loaded with the old fashioned lilac lilacs! 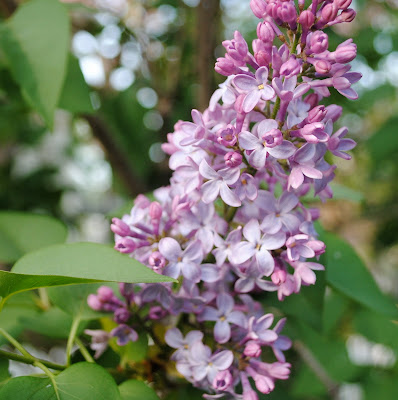 No fancy cultivars for me -- the old fashioned farm lilacs are perfect for Linderhof's old fashioned garden. And what to do with an abundance of lilac blooms. 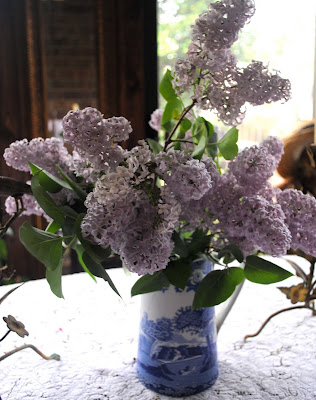 Cut them and bring them in . . . . so that the breakfast room and living room smell like lilacs as well as the outside! They make a spectacular bouquet in the blue and white Spode milk pitcher. 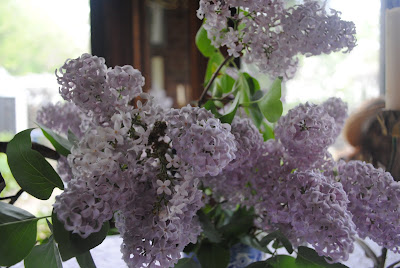 And I think you can almost smell the lilacs . . . can't you?
It's Wednesday and it's Outdoor Wednesday so please join Susan at A Southern Daydreamer to see what else is blooming outdoors this Spring Wednesday.
Posted by Martha at 2:53 PM

I used to have them all along my fence in Conn. both white and lilac. It's the one thing I miss the most about that house and every time Spring comes along it makes me so sad. Haven't seen them in Georgia, wonder if they grow here...The smell is just divine!!!!!

I agree, it is a lilac year! They must have liked our cold winter. I have three bushes too, along the fenceline between us and the neighbors. I planted them 5-6 years ago, so mine still have quite a bit of growing to to. I love that you were able to grow a plant from the shrub your parents had! I have tried to do that three times with a honeysuckle, only once successfully. (Hubby kept forgetting it was there and mowed over it.)

I am so jealous! I know they do smell wonderful.Lucky you!
That is very sweet that all your lilacs have a story.I really like that:)

You have an abundance of lilacs and I love it!! Send me some starts!!

They are beautiful. Wonderful color of purple.

I wish they didn't make me sneeze.

Martha: I can smell them clear to Colorado- mine are only starting to bud out as our spring comes very late. YOURS LOOK WONDERFUL!

Love this! I had just gathered a BUNCH of lilacs, filled an antique pitcher and posted an image of it on facebook...when I find Linderhof is right there too. Must be a good year and isn't it wonderful? The heady scent is enough to make us forget our snowy winter!!

We are having beautiful lilacs here too this year!! I just did my Tablescape Thursday table with lilacs yesterday! I just love the scent too. Yours are just gorgeous!!

It is a good year for lilacs in Kansas this year. Mine has never had this many blossoms, either. The smell, especially at night can be overpowering if one doesn't like the sweet smell. I will be sad when they have passed, which will be all too soon..
Sorry we couldn't get together yesterday...next month, maybe.

No lilacs here yet, but they're coming. One of my favourite flowers. Yours are gorgeous, and I love the stories each bush tells.

What a wonderful legacy of lilacs you've given Linderhof. The stories that go with each bush are so special - I especially like the 'rescued' start from the abandoned farm.

I feel they are abit early, but zi am happy to see them! I do think it is a good year for them! Mine look like yours-the old fashioned -and some are double flowered! We had to move 2 old ones and they came back very well. Others were suckers that we replanted and they are in bloom, too! We also moved one from ,my Mom's house and it must be over 50 years old. I love the vase!
~Nancy

Lovely! I especially like plants that have a history and your's certainly do. I'm with you on the old-fashioned lilac. They are hard to improve upon.

Have a lovely lilac-scented day at Linderhof.

Martha, I had rows of lilacs in NY and missed them so much that we planted a small one to start last year- I can't wait for the blooms!
xoxo Pattie

You know I can smell the lilacs, way over here in Normandy! Your lilacs are wonderful and look gorgeous in your blue & white jug. I have one lilac bush by the pond in the back garden, it's not yet in flower but I don't think it will be long before it blossoms.
~Maggie~

Oh my, your photos are beautiful, Martha. Lilacs are in full bloom here now and I love to walk around the neighborhood and smell their heavenly fragrance.

Hi Martha,
What beautiful lilacs. And to have the memory of your mother attached to one of the lilac bushes is just wonderful. Enjoy them! Thank you for sharing and thank you for stopping by A Petite Cottage, hope you come again soon. Have a wonderful day.

I love the old fashioned lilacs better than most any flowering bush. Just love them. Your's are breathtaking...

Martha, Do you think it's because we had so MUCH snow (moisture) here that our Lilacs are doing so good. Mine are really too. Beautiful bushes.

They are beautiful, Martha. I'm envious. The lilacs we have here are beautiful with nearly perfect form but they have no fragrance. I carried lilacs for my wedding, so I have a special tie to them. I hope you are having a wonderful day. Blessings...Mary

So very lovely, I think I can smell them.I have always adored lilac.
We are having rain today lots of rain. Rain is falling down my window at work. I love the sound of rain and am very glad to be inside.
Have a wonderful day all day long.
Hugs, Elizabeth

and your lilacs in the white and blue transferware pitcher are marvelous just like your teaset in your previous post.
I'm green with envy... so many amazing white and blue pieces.
rita

Love your lilacs and photos. I hope to have some Lilac in my yard this time next year.

Oh Martha, what abundance!!!!
Our lilacs are doing better than last year, but not as burgeoning as yours. I have Lilac envy!

Yours are ahead of ours --ours are just beginning to pop open from buds. My daughter Alida and her boyfriend are going to be here from California this weekend; I'm going to fill the house with wonderful lilac blooms. His family lives in the Mojave Desert -- no lilacs!

And you've inspired me to dig up some of those little off-shoots that snuggle in under the bushes. "Starts," Right?
Thanks!
Cass