A Kansas tradition is fried chicken dinners. Most towns -- especially the little towns have their fried chicken "joint" where locals (as well as travelers) would enjoy, most often, Sunday dinner. 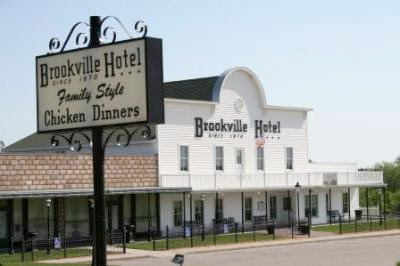 A winner of the James Beard American Classic Award, one of the Eight Wonders of Kansas -- food, the Brookville Hotel has been serving chicken dinners, family style since 1915. The menu has not changed much since 1915 --
Pickles, relishes and Pennsylvania Dutch coleslaw
Fried Chicken
Mashed Potatoes and Gravy
Creamed Corn
Biscuits with butter and jelly 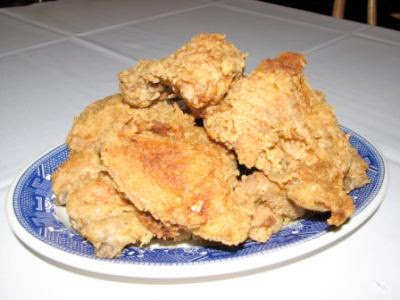 The chicken -- one half per diner which always assures that there will be some to take home for lunch the next day.
The Brookville Hotel was in Brookville, Kansas and has been feeding travelers since 1870. Brookville was about 15 miles Southeast of Salina, Kansas, and for a long time was on Highway 40 -- a main east/west artery. That, however, was supplanted by Interstate 70 and so, like many towns, Brookville was too far off the interstate.
But they still came -- from Salina and from little towns within driving distance. And highway travelers found them as well . . . . but . . .the owners felt that it would be better to move to the interstate.
And so, in 1999, they moved from Southwest of Salina, Kansas, to a spot within eye distance of Interstate 70 in Abilene. They replicated the old hotel and the food remains the same.
They generously share their recipes. For the coleslaw, corn and biscuits. They are easy recipes and old recipes as well. I've made the coleslaw for a long time -- it's similar to one that my grandmother made --
With our leftover chicken from Saturday night, we enjoyed a favorite Sunday night meal -- cold fried chicken, coleslaw, bread and butter. It always followed the Sunday Fried Chicken dinner when I was a child. The bread was often German rye bread picked up at a Jewish Bakery on the way home from church. 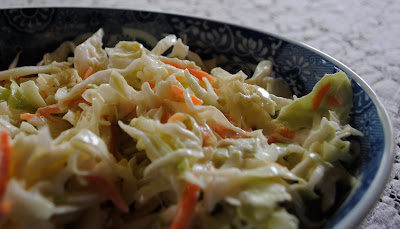 Since we were gone most of Saturday, I took the easy way out and used coleslaw mix rather than shredding cabbage so I have a bit of carrot in mine. We liked it -- my grandmother would have thought it heresay! Coleslaw was cabbage! 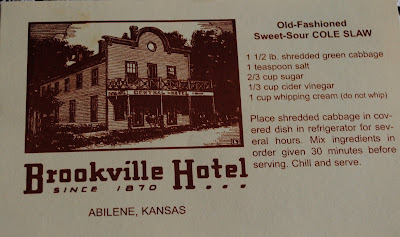 And the recipe -- freely handed out by the Hotel -- it's easy and just calls for 5 ingredients. It's sweet and creamy and not for those watching calories or fat!
It's Monday which means that it is Blue Monday at Smiling Sally's. Since the dinner (and my day after coleslaw) was served on Blue Willow (and blue transferware), I'm joining the party. Please visit Sally to see other Blues this Monday!
Posted by Martha at 12:51 PM

The fried chicken looks wonderful! Before we travel to the feedyards in southwestern Kansas and Texas later in the year, I'm going to get you to plan my dining itinerary! One year we drove across Kansas and found nothing more appealing than KY Fried Chicken and Hardee's. Last fall, we felt lucky to find a Mexican diner in some of the little towns. I wish I'd known about this place; I'm sure we travelled right by it. We usually look for a place with a parking lot filled with trucks... a good sign of good food!

My family likes the cold chicken dinner more than the hot one! I will try this slaw recipe!
xoxo Pattie

I want fried chicken now. Great post, thanks for sharing.

Oh my I love fried chicken! When I was pregnant I craved the greasy fried skin! LOL If you have a chance stop by http://shabbychictreasures.blogspot.com/ I am giving away a free teapot for the month of April!Hugs,
Olivia

You'll have us all drooling over our keyboards, Martha!
That chicken looks SO good. I'm on the road for work this week, but I don't think I'll find anything at all like that meal.

What a yummy dinner, and I love the blue plates. Happy Blue Monday.

All those pictures make me hungry! Really want to try that recipe, looks yummy...thanks!

What a lovely meal! It reminds me of the way meals are served in the Amana Colonies (Iowa). My mother and father-in-law grew up near Salina (I think): Marysville and Home City, KS and we do still travel to the area periodically to visit cousins. Will have to keep this in mind. Happy Blue Monday, and know that I enjoy your blog very much!
Blessings to you, Beth

I live in Lancaster County, PA and was interested in the fact that they serve "our" coleslaw....The blue willow dishes are lovely. My Mom has a very nice collection of these and I love to see them when I visit her home.

The fried chicken looks just like my Virginia mother's. I rarely do it myself but love it. And, you must always accompany it with cole slaw and mashed potatoes not to mention really cooked green beans, sliced tomatoes and biscuits.

Thanks for the memories.

If ever I open a restaurant, Martha, I want you to review it.The restaurant sounds wonderfully homely and the chicken looks wonderful. I hope all is wee. Blessings...Mary

Thank You for sharing the Hotel recipe, I loved reading about this place and the food, well I can almost taste it. Your pictures are great.
Betsy

That chicken looks SO delicious. We're taking a road trip East this summer, will be traveling I-70, and now I know where we will be finding something to eat in Abilene! Thanks also for sharing the coleslaw recipe. I'm a huge fan, and am always on the hunt for the "perfect" slaw.