Lamb Curry - Leftovers CAN Be Good!

My mother in early married days tried lamb -- except during the war years it must have been mutton. She had never eaten it growing up but decided to fix it for she and my father. But, in listening to her tell why we don't eat lamb, I'm sure that the "lamb" she had was actually mutton. That was her first and last time that she ever fixed lamb!
However, . . .
When I was growing up, my best friend, Sandy, lived with her mother and her grandmother -- who was English (Gram she was called). Occasionally, I would be invited to dinner and one the meals I thought was so good and exotic was a dish that "Gram" made called curry. She served a homemade condiment with it (which I figured out was chutney) and some other fun things to sprinkle on.
I later learned that it was the remnants of the Sunday roast -- the Sunday roast being a leg of lamb!
And I felt that my mother had missed the boat by not serving lamb!
Leftovers can be a warmed up version of the night before dinner or you can create something new (and often exotic) from the meat from the night before. 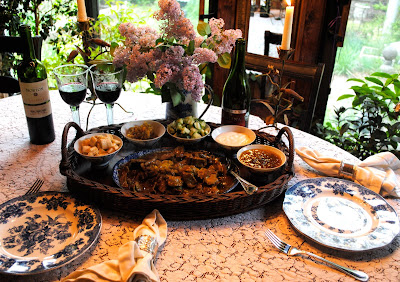 This lamb curry is the new and exotic way to serve lamb again!
In some ways (like the Thanksgiving Evening turkey sandwich is so much better than the real meal) the leftovers can outshine the originals.
This is not Gram's recipe. I was too young to even think about asking for it -- but it seems to me to taste pretty much like hers.
It's Friday which means that it is time for Foodie Friday -- so please join Michael at Designs by Gollum to see what everyone has been cooking this week.
We, at Linderhof, have been munching on leftovers!
Leftover Lamb Curry 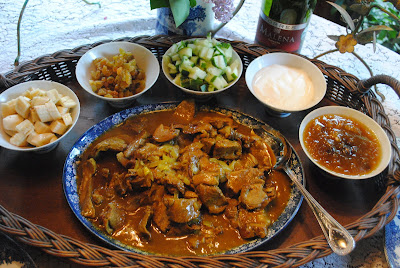 Served with chunks of banana, golden raisins, cucumbers diced, yogurt and Major Grey's Chutney (I don't make my own like Gram did!) 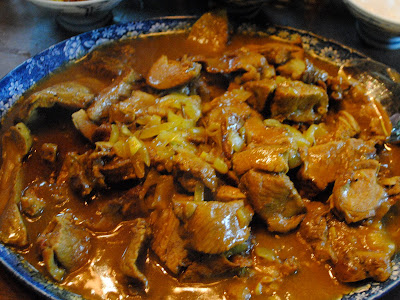 A mixture of onion and lamb with a touch of garlic in a great curry sauce with a touch of cumin!
LEFTOVER LAMB CURRY
1 1/2 cups rice (your favorite made according to package directions)
1 pound cooked lamb, fat-trimmed, cut into strips
1 t. oil
1 cup chopped onion
2 cloves garlic, minced
2 T. curry powder (or more if you'd like)
1/2 t. ground cumin
1 3/4 c. chicken broth
2 T. cornstarch
salt and cayenne
Cook rice according to package directions
Cut the lamb into strips about 1/4 inch thick
In a 5 to 6 quart pan over medium heat, combine oil, onion and garlic; stir often until onion begins to brown lightly -- about 6 to 7 minutes
Add curry powder and cumin and stir until spices are fragrant, about 30 seconds.
Stir in meat. Add 1 1/2 cups broth and bring to a boil over high heat. Mix cornstarch and 1/4 cup broth. Stir into pan and stir until boiling resumes. Add salt and cayenne to taste. Spoon curry into bowl.
Serve with rice and condiments -- some suggestions: diced banana, diced cucumber, golden raisins or currants, peanuts, chutney, plain yogurt.
Posted by Martha at 7:37 PM

Yummy! I am going to have to give this one a try! Thanks and have a blessed day!
Juanita

Oh, how good this looks! And how sweet your post on your beloved Linderhof. Such a sweet post. So nice visiting with you this evening!

Martha, this curry looks fabulous and filling. But your beautiful presentation captured my heart! You have such a way with tables.
I'm always so excited to visit!
YVonne

It's so true - the Sunday roast is even better on its second go-round as a curry or meat pie (also with chutney at our house). Your Lamb Curry looks delish!

Love that tray and love curries. This looks fantastic for leftovers.

That looks good...I rarely make lamb. I am of Irish heritage and we had it every week growing up, and then the leftovers..I think I got Baaa d impression of lamb..:)
Loved the story about your house..

Martha, your curry sounds delicious. Years ago, mutton was sold as lamb to the unknowing and it was fat. It literally would congeal on the roof of your mouth. With today's lamb that's not a problem and leftovers using your recipe should be wonderful. Have a fabulous day. Blessings... Mary

Martha, you have a beautiful dish there. Anyone would take a liking to lamb after eating it, I'm sure.

I loved seeing and reading about your home and its beloved name...it is lovely!
Rene'

Your lamb dish looks DIVINE and I dearly love anything with curry in it. Made my copy.

I don't make lamb often and when I do it's usually grilled lamb chops. This looks like a wonderful way to use leftovers! I love the condiments.

Tasty in every way! Thanks...