Linderhof has no entry hall. Alas, it is one of the features that would make Linderhof absolutely perfect -- an entry hall (the others are a back staircase and a butler's pantry). So, we put our bookcases along the wall so that is the first thing you see as you enter.
And, after I bought my wonderful tilt top table, it rested in front of the bookcases so that I could whisk it off between the wing chairs in front of the fireplace whenever I decided to take tea or dinner there on a winter's eve. 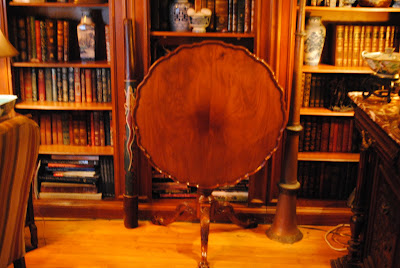 But, then, I had this table that has been behind the sofa for a long time -- used (with another table) as a sofa table. I decided to move the tilt top closer to the wing chairs and fireplace and move this table in front of the bookshelves so that, perhaps it could be used as a real table (which is what it is). 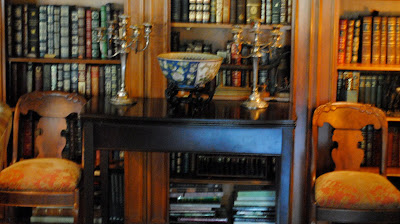 It folds up to half size and with only the candlesticks and an Oriental bowl on top, it can be transformed into either a bridge table or . . . . 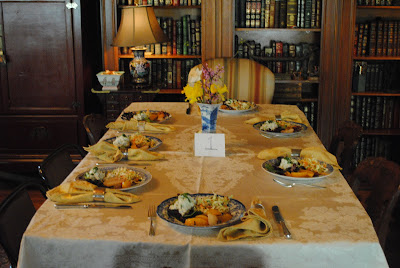 a dining table that will seat 8 if we have lots of company!! (As we did last Wednesday).
It's a great bridge table because there is room underneath for legs (very important) and it can seat an extra 4 for dinner with very little effort.
I'm so glad that it came out from behind the sofa -- we were able to use it last Wednesday and it will be handy to use at other times when the girls come for bridge.
The chairs are new -- there are two more in the bedrooms upstairs. They're old and I estimate them to be from the mid 1800's. They're great chairs and the seat color goes so well in the living room. They're family -- a cousin who had them asked if I wanted them -- she got them from Cousin Grace -- as she was moving to a smaller house. I, of course, said yes. I think that Cousin Grace may have gotten them from her mother (Aunt Matt whom I was named after) and they may have even belonged to Aunt Matt's mother Elizabeth.
They will be loved and cherished at Linderhof.
It's Monday and my metamorphosis is small. But I like the different table and the two chairs in front of the bookshelves as you walk in -- it seems more like an entry hall!
Join Susan at Between Naps on the Porch to see bigger metamorphosis this Monday.
Posted by Martha at 6:55 PM

I think your 'new' arrangement is great. There's something about rearranging furniture that transforms a room into an entirely new habitat. Good job!

What a fabulous table! I love how adaptable it is- and I love the bookcases in the entry!
xoxo pattie

Dear Martha, thank you for visiting me
you have a LOVELY home and your garden is delightful, can't wait to see more photos of it in the coming days and months
your bookcases are heavenly
and that table...my my my

What a great table. I love that it is so versatile and the chairs are absolutely stunning. How nice that they were passed down to you. Looks fabulous. Hugs, Marty

Perfect.
Both tables are lovely, but isn't it nice to have a change?

Both tables are lovely. Nice to have family pieces. Stopping by from BNOTP.

What a great table! I'm also in AWE of your round table. What an amazing treasure. I have a drop leaf table behind my couch that my mother-in-law gave us. (She is the source of most of our treasured antiques. Father-in-law has a wood shop and is a restorer extraordinaire.) It has plants on it now, but comes out when our dinner guests number more than 8. Which happens frequently. We so enjoy large gatherings here.

Dear One,
Always a delight to visit your blog and see what you are up to!
Spring Cleaning going on around here as well.

There's just something about Spring that puts me in the mood to rearrange furniture as well.

Your place looks lovely.
d from HomeHaven in the middle of the Kansas Prairie

I love the new arrangement but I'm really in love with the half-table. I've seen them before and think they are such a great idea. Your living room is beautiful. Have a great day...Mary

Martha, I love what you did to create an intimate entry, and like you, I love the two chairs with the table between. Gorgeous.

I'm working in the yard at CDLV, and have added to my list of things that would make this place perfect (as well as a back stair and BP) a potting shed and green house. LOL!

I'm gonna troll the blog for a while. I'm needing brick inspiration from your garden. :)

Martha, that is a beautiful arrangement. I love furniture that can be used different ways. The arrangement is so pretty and the chairs are charming and it is so special that they are from family.