My Affair With My House 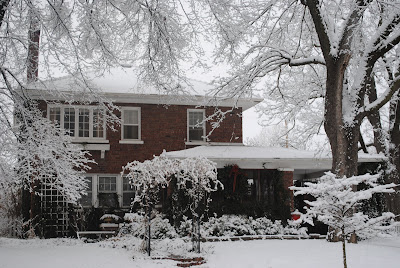 My affair with my house started 22 years ago when Husband Jim was told that he (we) had to move to this town on the prairie. I dragged my feet for I didn't want to move but Husband Jim called and told me that he had a house he wanted me to look at -- which would mean that it was a blind date!
And I went on the blind date!
(Blind dates seem to work for me -- Husband Jim and I met on a blind date -- he proposed the next night and we were married a month later -- 40 years ago!)
I fell in love as we drove up and when I walked in the master bedroom with the fireplace, I could have signed the contract right then and there -- for the asking price!!!!
But, thankfully, I kept my head.
And we got the house for less than the asking price!
It became Linderhof before we moved in because we had been to England about six months before and we loved the fact that so many of their houses had names (often instead of addresses).
Linderhof because the builder of the house was German and my heritage is German. Named by Husband Jim who had been to the real Linderhof in Germany. It was his favorite castle.
When we moved in, we had an engraved brass plaque that we put on the door that said simply "Linderhof".
In the days before bed and breakfasts (for they have names), it was confusing and strangers would often address me as "Mrs. Linderhof"! (which I found terribly amusing).
When I started writing the column for the newspaper and found that people didn't know where "Linderhof" was . . . the big plaque was made and put on the front of the house.
Although there was a fireplace in the Master Bedroom (something I had always wanted) -- and two more fireplaces as well -- there were some things it lacked in my "always wanted in a house" . . . a walk up attic (but we fixed that -- we made one), a breakfast room (we fixed that - we added one), an door from the house to the back garden (we fixed that -- we made one), wood floors (they were there -- we uncovered them and refinished them), white painted cabinets with glass uppers (we redid the NEW oak cabinets that were there so they looked older)
But the things it DID have -- the fireplace in Master Bedroom and dining room as well as the living room, a great kitchen, an old fashioned bathroom, wood floors, were all things I wanted in a house.
We fixed some of the things it didn't have (see above) but there are two things that I would love to have that, alas, will never be at Linderhof -- a back staircase and a butler's pantry!!!! Sigh! And I'm too in love with Linderhof to casually toss her away for my two wants -- houses have come on the market that include those two things but my affair with Linderhof has been so long that I just can't toss her aside for a back staircase and a butler's pantry!
Linderhof is a 1920's brick four square with Craftsman influences on the outside (the porch and portico) but inside it's classic with wide always painted woodwork. Original light fixtures grace both the back door and the front door. Inside -- the first update was in 1948 -- the second in 1985.
We've been here 22 years and some things have changed over our years but some things haven't. We have put back things that were taken out -- like the pedestal sink in the bathroom, the swinging door between dining room and kitchen, and the tile in the bathroom. But we have added our own touches -- the chandeliers in all the rooms!
I'm still in love with Linderhof and my husband doesn't mind this affair of mine for he loves her as much as I!
It's a great party at Our Suburban Cottage. Join AnNichole to see how others "Met Their House" today! 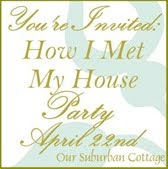 Labels: How I Met My Cottage, Linderhof

What a great story! I love that you've lived there for 22 years, that you named it (and the reason why) and that you've become known as Mrs. Linderhof. So funny!

Also, I can't resist pointing out a typo--I think you meant to say ...the big plaque was made instead of ...the big plague. I'm sure the Linderhof castle endured the plague but I hope your Linderhof never has to! :D I hope you don't mind that I found that humorous--it's the kind of typo that I would make!

You caught my interest as soon as your said prairie. For some reason the concept of "a prairie" charms me. Maybe too many books about Frank Lloyd Wright! I live on the East Coast ... no prairies here. Your house is beautiful and I enjoy your blog.

Wonderful story, Martha! I never knew that Linderhof had 4 fireplaces! I don't even have one! The faux fireplace in the living room looks real - heck, it was built with the house ... but alas, it's not. I want to put a gas insert in ... but it's not been feasible without great expense. So, I fill it with candles or ferns, or a blue and white temple jar, as I have in there right now! I think it adds to the character and charm of this old house - but I'd love for it to be functional! :)

Thank you again for the tour of your home last summer. You have a beautiful home!

I would have fallen in love with Linderhof myself. It sounds so charming and I love how you carried on your German heritage with the name. I am German also.

I would love to have a fireplace in our master. Even a gas fireplace. How lucky you are. Linderhof sounds perfect to me!

Great story. I've been reading your blog for quite some time and never understood the name of your blog. Now I get it. It is funny how people have affairs with their homes.

I'm off to check out the party.

Be sure to check out my give away. They are birdie plates that I could see at Linderhof!

Lovely to have fallen in love with your 'forever house' at such a young age. Linderhof is a beauty - no doubt about it!

Now Martha, you know I love Linderhof, and I LOVE this story of YOUR love affair with her!
I have serious fireplace envy. Your master bedroom is to swoon for.

How did you handle the new oak cabinets? What process? We have new-ish (6 year old) Kraftmaid oak cabinets in our kitchen; loathe them. Can't afford to replace them!
Am afraid to just paint them!

Well, it's gorgeous and I can see why you love it!

A beautiful story, a beautiful home! Thank you so much for sharing with all of us.

Martha, your love of Linderhof shines through every word you write about it. Your home is lovely and your words make us love it too. I didn't know it was named after a castle. Neat! I hope you are having a wonderful day. Blessings...Mary

I love the story about your home! A treasure full of treasures!

Your home is beautiful. I can see why you fell in love with it. All the moldings and the fireplaces would have definitely made me love it too. Hugs, Marty

I loved reading this and so wonderful that you found your dream home and have stayed there.So many people I know have found or built their dream then when they have every thing in it they ever wanted,they sell up !!
I always wanted an old stone cottage with roses and vines growing over it,I have got it with all the trimmings,but never thought I would be in for the castle as well.

Aw, what a great story! I can see why you love your house so much!! I didn't know you wrote for the newspaper, but now your blog title makes even more sense.

Loved reading your story today...I never dreamed I'd live in a new home...I love stories with character...but we just couldn't find land and a house combo that worked...so yes, I live in a new house which I spend countless hours trying to make it look old!

Such a great story. This is so much fun reading how people got their homes. Wow married in one month. Good for you!

Such a nice story and I really like the name, I call mine Wildwood. Always liked the idea of naming homes.
German built, to me means WELL built. I have German heritage also and when I visited Germany to see my daughter in 2007, I could how strong the homes are.
You have a beautiful home.
Betsy

I love to hear about great 'house stories'! Thanks for sharing.
We have a Queen Anne Victorian built in 1886-1887. Our house DOES have a back staircase and we think there was once a butler's pantry (now a downstairs bathroom!), but not enough closets (typical!) and I'd love a breakfast room as well as a master bedroom fireplace! But as you pointed out, we are too much in love with our house to trade it for something else!

One of the things I love most about you is your appreciation for things traditional. This post just made my day. I love knowing there are people like you "out there". I too, live in a 1920's brick home. It's got great baseboards and trim, good bones, high ceilings and a stone fireplace. We have now been in the house 18 years...from a new suburban house we thought was "it".

Oh my goodness! Your husband proposed the night after your first date?! WOW. Talk about love at first site!

Your home is lovely, and I think it's absolutely charming that it has a name.

Thanks so much for sharing your story, and for linking to my party!

Great story about your house...I love all the beautiful houses on your street!

It was great reading how Linderhof got it's name ;)