Reprise-- My Affair with A House

This was originally posted on May 28, 2008 and Lines from Linderhof was in its infancy. Comments early on were minimal and this post received none.
But after this week's "How I Met My House" -- I thought this post about Linderhof would help complete the circle.
Please join Chari at Happy to Design. She's celebrating her year anniversary of Sunday Favorites and she has a give-away!!!! See what other favorites there are this Sunday! 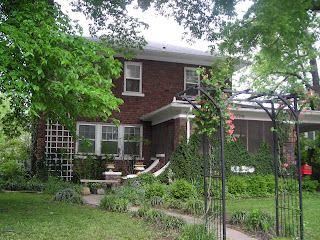 Shamelessly, I took the title from one of Bunny Williams books for I, too, have had an affair with a house -- this house, Linderhof. It's a brick four square with a wide screened in front porch, a portico from which to hang plants in the summer, roses growing up one side and ivy up the other. 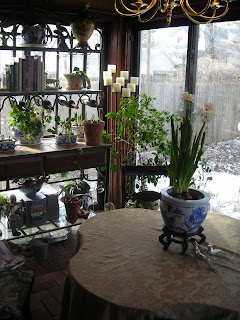 The only structural change ever made in it's 88 years has been the breakfast room which we added on last fall. We did it with a sympathetic eye to the house and most of our visitors think it is our back porch which we have enclosed. 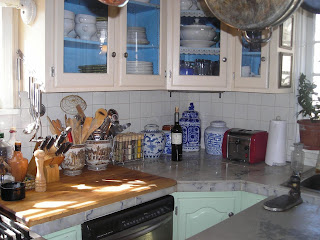 We took the 1985 kitchen which we inherited when we bought the house and made it a kitchen with 1920's flavor. Ours is it's third incarnation after the original 1920's kitchen. It was updated in 1948 and then again in 1985 and in 1995 we took the center panels out of the upper cabinets, added glass and painted ALL of the cabinets. This from a person who thinks it a sin to paint wood! But by doing that, the kitchen seemed part of the house rather than something tacked on.

A house is constantly changing and although the living room has been a dark green ever since we lived here, new furnishings have replaced old and by changing window treatments or upholstery, rooms have a different perspective.

I love this old house and she is a grand lady.

How lovely! Your kitchen is beautiful.

Oh Martha- you certainly know that I, too, love your grand lady- she was lucky to find you
xoxo Pattie

What a beauty! My dad is refurbishing an American 4Square house that is 100 years old this year. He loves it.

Beautiful Kitchen!! What a grand old lady you have!!
Debbie

This is just such a lovely and cheerful kitchen!..,

Your whole house is just beautiful as well!~Thanks for sharing!

Your house has the air of a grande dame who knows she has the good bones to see her through - very proud, elegant enough and homey enough. No wonder you love your house!

We've lived in many houses over the years but my favorite house thus far was our very first house built in 1938. We'll be relocating again and I will search for a house again built in that era. I can see why you are having an affair with your house. It is charming for sure.

Ohhh my...and she certainly is a GRAND old house...Linderhof!!! Your home is fabulous, Martha...I certainly can understand your post title...My Affair with a House!!! I have sooo enjoyed all of my many visits to your beautiful home! I didn't realize that your breakfast room was an addition...ya'll did a marvelous job incorporating it into the home! Ohh..and I love your kitchen with its pretty white cabinets and glass doors!!! What a fabulous post to share with us today for Sunday Favorites...it certainly deserved a second showing, my friend!!!

I also wanted to thank you for your sweet note of well wishes for my Sunday Favorites "One Year" birthday celebration! Martha, you are so right, you have been one of my SF's faithful participants...thank you!!! I have thoroughly enjoyed each and every one of those SF posts that you have shared with us!!! Thank you, friend!!!

Have a super Sunday and best wishes on the gift card giveaway!

Your grand lady is lucky she has someone who loves her as much as you do, Martha! She is a treasure, that's for sure.

Martha, thanks so much for sharing this post today. I love your kitchen and your breakfast room is wonderful. Thanks for leaving your sweet comment on my blog so that I would go back to visit you!

What a beautiful home you have. It is such fun to make them the way you love them. Your kitchen is lovely!

Your home is just lovely....And, I especially love it that you've named it.

Lovely house...the kitchen is so cheerful; what a pleasant room to come down to in the morning!

I love your house, too! We are moving soon and I'd much rather have an old house than a new one! Happy Sunday!

Martha,
I love what you are doing to your home! Thanks so much for sharing and have a blessed day!
Juanita

You kitchen is beautiful! I have been wondering about redirecting ours and am thinking of blue. Love the blue and white china too.

I love your house too - everytime Ivisit your blog I feel comfort!