The flowers around the pond are mostly spiky ones -- liarope, day lilies, salvia, veronica . . . and of course, the roses. But this year, two new plants joined those spiky ones -- a Lenten rose and a favorite, a bleeding heart. 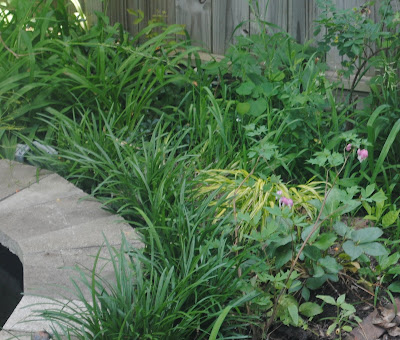 My mother always had bleeding hearts -- in her garden in the city and then when she moved to the suburbs, a start came with her. 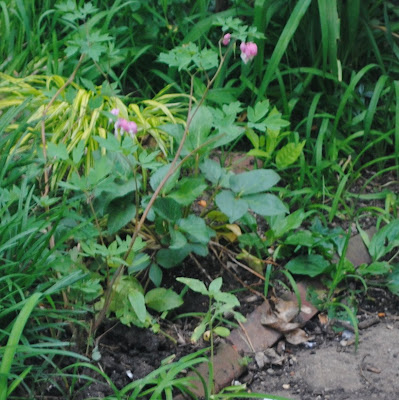 I love the pink hearts that dangle from the branches of the bleeding heart. And, as a child, flowers were not just for the dining room and kitchen tables but were also to play with. I spent hours in the garden playing with columbine, making hollyhock dolls, and playing with bleeding hearts while my mother weeded and tended to her flowers. 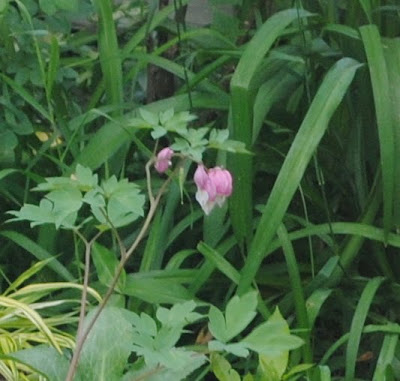 It was my mother who taught me about the garden fairies and legends that surround the flowers. The legend of the bleeding heart is true, and it's fun to get a blossom or two and follow the directions of the story.
Once upon a time there lived a beautiful princess. Young men from far and near came to pay her court. But the princess was very vain and would have nothing to do with any of them.
A young prince from a neighboring country fell deeply in love with her. She ignored him like the others, though he tried and tried to win her heart.
One day the prince found a pair of pretty pink rabbits at the market. He sent them to the princess thinking "these will surely melt her heart".
Carefully break off the two outside petals of a flower. You will find that they do look like a pair of pink rabbits!
But the princess went right on ignoring him. Then the prince sent her a pair of beautiful Oriental slippers.
Take off the two long petals. You can easily see the dainty heels, the slender insteps and the widened toes. They should look like a pair of real Oriental slippers.

Still the princess would have nothing to do with him. The young prince was so heart broken that he took his dagger and drove it into his heart.

The remains of the flower made the outline of a heart with a line down the center. If you break out the stamen (which made the line) it looks like a dagger. Put it through the center of the heart. The perfect heart will be pierced by a dagger!

As soon as the prince was dead, the princess realized that she really loved him. "As long as I live, my heart shall bleed for my prince", she wept!

That is the legend of the bleeding heart!

My bleeding heart, the latest addition, to Linderhof's garden came from Minnesota. It is adapting to prairie heat very well. It shall remind me of all of those bleeding heart flowers that I played with as a child and the bleeding heart that was always in my mother's garden.

It's Saturday, which means that it's Pink Satuarday -- please join Beverly at How Sweet the Sound to see everyone's Pinks this Saturday!

What a great story and legend. I've never had bleeding hearts but now I want to find some to try the story. Have a good weekend.

My Mom loves the bleeding hearts too. I had not heard the legend before.

Bleeding Hearts do well here, too. They're my daughter's favorites - ever since she played with them in childhood.

I've never heard the legend, but my grandmother always had them in her garden. I tried when we moved here, but they didn't doo well. I don't know if it was the summer heat or the soil. I really must try again, as I love them
xoxo Pattie

Hollyhock flowers yes..but that legend I have never heard...
but I prefer to just look at their beauty as is.....but I will be tempted, I admit to take one apart just once

I love bleeding hearts but never knew the legend! Thanks Martha!

Martha.... I love Bleeding Hearts, but in this house I don't have any. Thanks for sharing that legend I never heard of it before. ......have a great weekend!!!!

Lovely pictures and story. Hope you have a lovely weekend, thanks for stopping by.

Martha, I never knew the legend of the bleeding heart. Thank you for posting it. I have always admired bleeding hearts but never had one. It it time for me to go shopping at the plant store:-)
Have a great weekend!
Lottie

Hello and a very happy Pink Saturday to you!!

It's a very hot summerday in The Netherlands and I'm enjoying all pink posts in the garden! Love Es XX

Martha, love the story behind these lovely little slippers!

What an enchanting story! I am so sad that my bleeding hearts are long finished for the season and I will have to wait until next spring to follow the little story. Maybe you could post photos! Thanks so much for sharing!