A Pot of Dill 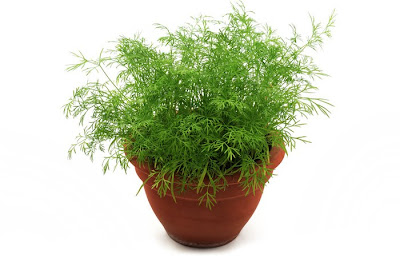 Every herb garden should have dill in it -- actually, every garden should have dill in it. It's an easy herb to grow although it is an annual it will reseed itself if given half a chance and thus, you will always have a patch of dill.
It smells so fresh and refreshing and is absolutely necessary for cucumbers, pickles, fish, and is good in potato salad, dips, breads, muffins, scones and cornbread. It's a real "workhorse" of an herb!
Which is why it was named 2010 Herb of the Year!
In the garden at Linderhof, the dill grows in a pot -- not because we want to contain it but because we have no other room for it. A pot of feathery dill is indeed a pretty sight. And if you keep it pinched back it grows bushy plus you have the trimmings to use with fresh Farmer's Market cucumbers or a sauce to go on the grilled salmon.
It does have relatives in the garden -- the parsley and the fennel - umbrels all.
It is definitely an old fashioned herb -- one of those garden plants that almost everyone who grew cucumbers grew -- so that they would have dill for pickles. My grandmother always had dill in her garden and I remember as a child munching on the seeds -- they tasted like pickles to me!
Linderhof's dill are little plants but they will grow and grow fast. Fresh dill is a luxury of summer!
Posted by Martha at 6:36 AM

You know, of all the herbs I have in my garden, dill isn't one of them. I'll have to correct that. Thanks for the inspriation.

I love dill for many things, but I also love the way it looks in my pots! :)
xoxo Pattie

Martha, I too, have memories of my grandfather's garden filled with dill. Just one touch of it and I'm back to that garden.

Martha, I have never had much luck growing dill. I have always had it in the ground, maybe I will try it in a pot! Any other tips on growing Dill?
Thanks, Kendra

I'm on my way to the nursery now to get some. Thanks!

It is an herb I love, Martha. I make a lot of gravlax here and dill is an absolute necessity. I hope you are having a wonderful day. Blessings...Mary

Martha, I'm with Amy...Dill is on my list for my shopping this afternoon! Thanks for this post!

I'm just getting my garden going here and a dill plant is definitely on the list! I hope that pinching it back makes it lush and lovely like yours and not too long and gangly.

I simply love Dill weed on my cucumber sandwiches! Such a 'fresh' flavor!
Nancy