Hooray for the Red, White and Blue!

The Fourth of July, a holiday just for the United States of America. It's the day we celebrate our freedom. In big town America as well as small town America there are still parades to honor this special day. Picnics and BBQ's abound and almost every city, town or village has a fireworks display on the Fourth.
And at Linderhof, we show our patriotism with flags. Small flags stuck into the planters around Linderhof. 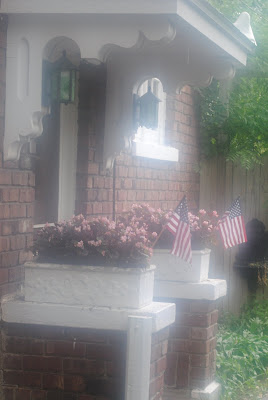 The planters by the back door get a flag for you can see them from the street. It's not foggy or hazy this morning but it is humid and a camera in air conditioning taken outside does get a foggy lens! 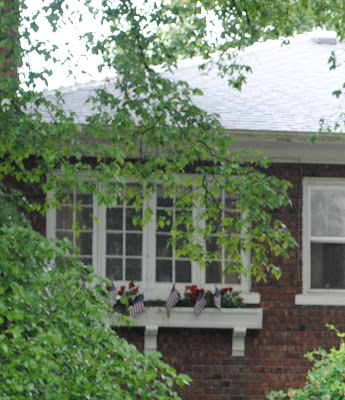 The window box at the front gets an array of flags which we, think, looks smashing among the red geraniums! 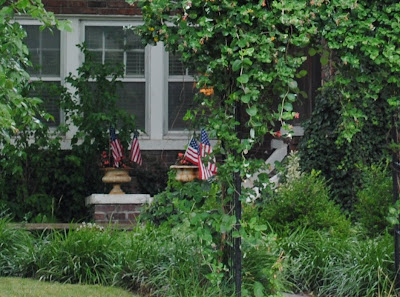 Two more flags in each of the front planters. It's the Fourth and time to flaunt the stars and stripes! 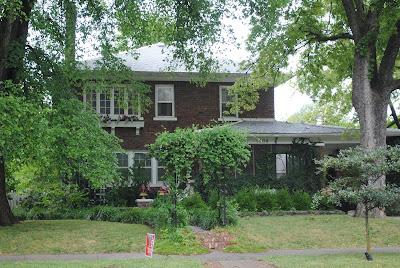 What could be more patriotic than flags in the planters and a campaign sign in the yard! 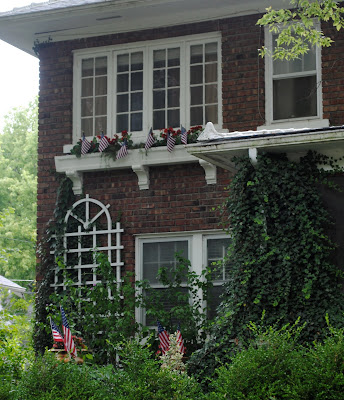 The front with flags both up and down! 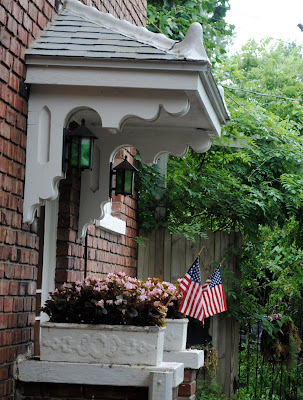 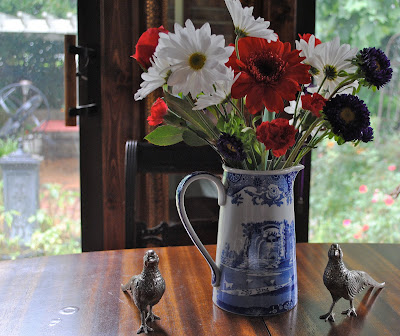 My bouquet -- from the market -- a red gerber daisy, white Shasta daisies, red carnations and blue (almost purple) flowers. Nothing like red, white and blue in a blue and white Spode pitcher!
Tomorrow on the 4th, we'll spend an old fashioned Fourth -- with a fried chicken box lunch at noon on the grounds of our old Fort, staying to enjoy the concert -- the Blue and Gray Brass Brigade Band and having some homemade ice cream at intermission. That evening we'll join the rest of the Fort Scottians for the Public Fireworks Display. It's a Fourth of July tradition!
Have a Happy Fourth of July!!!!
Posted by Martha at 3:47 PM

Hi sweetie!
I gave you a couple of awards! You can find out about them here~
http://songberries.blogspot.com/2010/07/ive-been-given-2-awards.html

Love all the flags, and your flowers are so pretty. Looks like everyone is busy, not many visits.
Have a happy 4th of July weekend.
Hugs
Gail

It can't get better than that! Love the community together celebrating with music! Happy July 4th!
Lottie

You home looks appropriately festive and it sounds like you have wonderful plans for the weekend. Enjoy. Have a great day. Blessings...Mary

Have a great day Martha, sounds like it will be a lot of fun! I particularly love the flags in your upstairs window-boxes.
Dan
-x-

Your flag-bedecked window boxes are very festive, and so in keeping with the house. Have a wonderful celebration!

Your home is so festive.

Love your pictures of Linderhof adorned with the windowbox flags.

BTW, I love the picture of Linderhof (fourth one down), and you should consider putting that picture up in place of your current opening one, as it shows the entire front of Linderhof. She sure is a grand old home. :)

I just found out that you are on "the food board" or something like that, with my sister-in-law Susan. It's already a small world, but when you get into the online world, it gets even smaller. Just thought I would share that little tidbit. Have a great day!