Occasionally, the Lunch Bunch will go "on the road" . . . and we did that last Thursday for a wonderful trip to the city where we took a Women in Art and Architecture outing given by the Nelson-Atkins Museum.
The Art was in the museum -- in the Bloch Building where the contemporary art resides. I can appreciate it and enjoy viewing it in museums and galleries but I'm not one who can visualize that type of art in most homes. But it was interesting to hear about the ladies who created that art for women are often forgotten in the realm of art.
The Architecture part was on a trolley as we traversed around mid-town and the Plaza. But first, we met at the wonderful Union Station in Kansas City which thankfully has been preserved. It is a great building and one that holds fond memories for both myself and husband Jim. 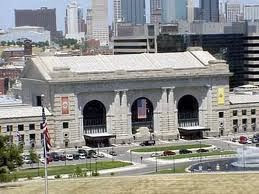 And in the Union State is a wonderful restaurant called 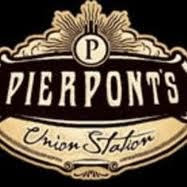 We love going there -- to dine in Union Station although it's mostly for lunch. There is nothing like dining amidst history! 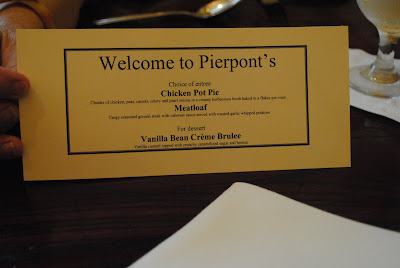 Our lunch choices -- two of us had the meatloaf and two the chicken pot pie. 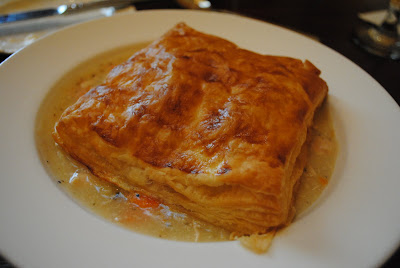 Which was full of chunks of chicken and vegetables and herbs and topped with a flaky puff pastry crust. 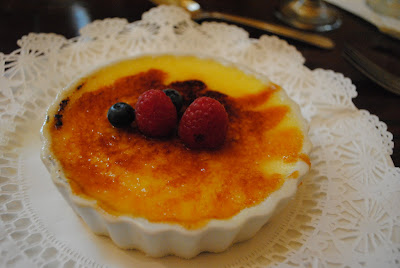 Most important, however, is dessert, and the creme brulee was one of the best I've had.
A very fine lunch, we all thought.
And then to the trolleys and out to see these amazing Kansas City women of architecture. They all were born in the late 19th century and all seemed to live amazingly long lives as well.
They were pioneers for when they were practicing architecture, there were few women who did.
Their stories are all amazing as are their buildings. One did mostly apartment buildings while the others seemed to be strictly residential.
The ladies, their buildings and their stories . . . .
Nelle Peters was the apartment house architect. Designing as many as 2,000 buildings. Her work had an important impact on the normative building fabric of Kansas City, what i also called the "Everyday Architecture". Although not especially distinctive, the buildings are full of character and contribute much to what we perceive to be Kansas City style multi-family housing. Indeed, without the hand of Nelle Peters, Kansas City would be a much different place. 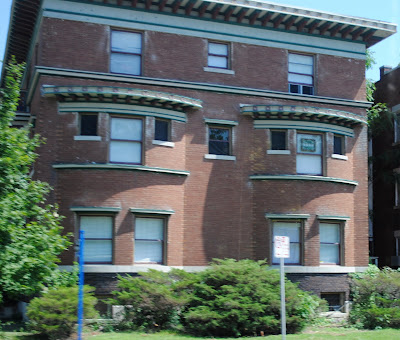 One of her smaller apartment buildings -- a four unit. Notice the detail over the windows on the upper floor.
Annie J. Scott was noted for participating in all aspects of home building, from drawing plans for her homes to overseeing material purchases and construction management. She even ventured into other areas of the home building market indicted through her possession of her own stone quarry during this time. 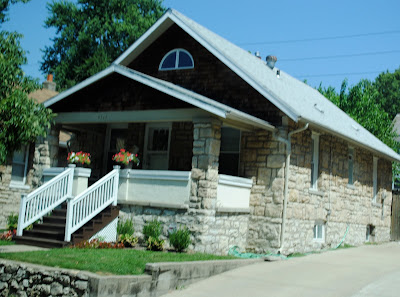 One of her houses at 43rd and State Line which she developed in 1902. She divided this property into separate plots and sold each of them, earning herself a very tidy profit. This is a great bungalow made out of stone from her quarry.
Elizabeth Evans Rivard encountered reistance to a female presence in architecture. Besides the apprehension of being the only female in her university class, she also faced direct prejuice in the workplace. The most notable occurrence came from the all-male staff at her first job who vowed to walk out if a woman was employed there. The threat was never resalized and Elizabeth persevered in her work, creating a decade long career from 1923 to 1933. After her marriage in 1930, she continued her career for another three years on a part-time basis. When she married, she brought her new husband to Kansas City to live in the home that she built here, where she raised her three children. She remained in this house until she passed away in February of 1988. 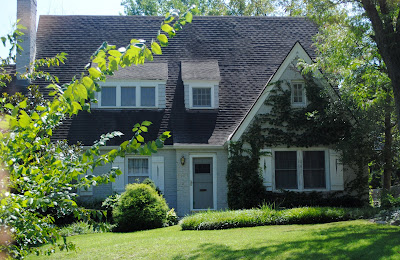 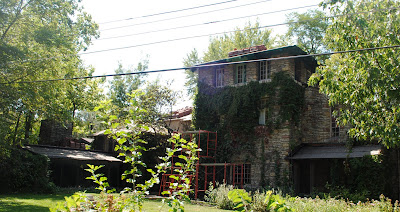 In April of this year, we went Estate Sale - ing. On the last day of a three day sale, we came upon this house. It was love at first site for me, although you could tell that it needed work -- the bones were good and all of the original fixtures were still in place.
We found the house interesting and wondered about the story behind the house. Lo and behold, our last stop this day, unraveled that story for us!!!!
Mary Rockwell Hook many residential projects is a set of identifiable characteristics that define her design style. An example of this is her use of materials found on the site and other building sites whenever possible, often combined with brick. These would create a focal point from which she would expand her own design. Her love of building on sloping lots also lent a distinctive quality to many of her projects. She often employed stone walls and decorative brick archway in her homes and designed asymmetrical as she did not have a love of classical symmetry. Another of her many design traits was her use of multiple entrances to the exterior -- gardens, patios, porches and decks. These and other unique characteristics speak of Mary Rockwell Hook's maturity of design, innovative use of materials and attention to detail.
On a private cul de sac above the Plaza and Sunset Drive, are three houses. One of which was our Estate Sale house. These we learned, were all designed by Mary. 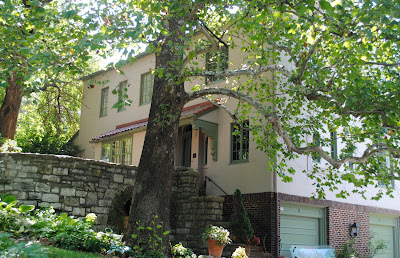 The first is interesting with it's stucco walls, the large stone terrace. 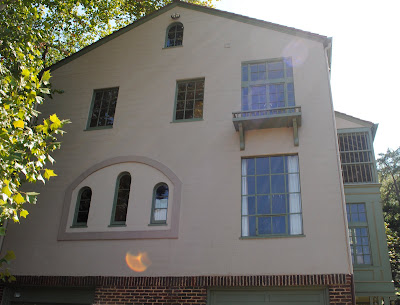 The interesting windows and in the back, a sleeping porch.
She built it for herself. But then she decided to build another. Trips to Europe influenced her designs. And her sister moved into this house when Mary's new house was built. 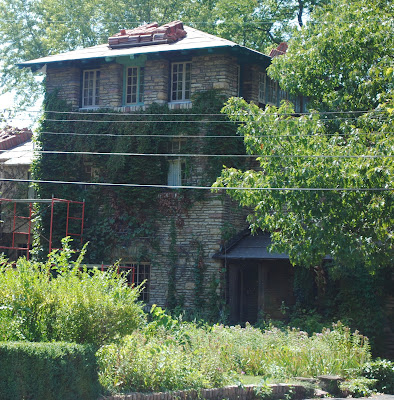 The Estate Sale house. Which is definitely European in feel. I love Linderhof for I've had an affair with her for 22 years but I must say that my heart was swayed by this house. Still intact was the original light fixtures, the soaring two story living room with huge windows overlooking the Plaza. The library nook that overlooked the living room. The dining room which felt so European that one would assume you could be served stag! 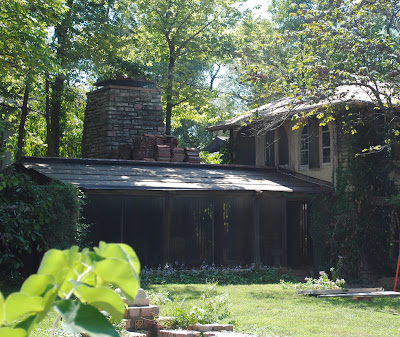 And the outdoor spaces . . .the remnants of the garden and a wonderful summer area -- screened summer house with fireplace with an upstairs -- how magical for children.
Mary was known for her exteriors as well. Until this spring, the house was still in the hands of Mary's family -- a niece lived in it until she sold it not long before the Estate Sale. The Hook women obviously were long lived!
Her parents ended up living in this house because Mary built another house for herself. 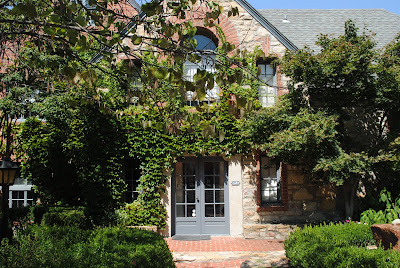 From Italy or Germany back to England. A cottage with ivy growing up the front. You can see her use of brick and stone. 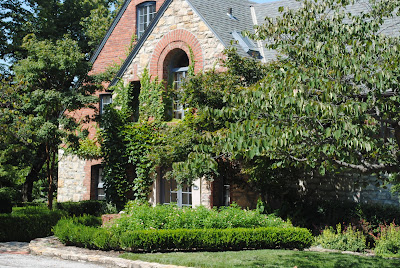 And although it looks like a cottage it truly was more of a mansion -- for it went on and around. With one of the first private swimming pools in Kansas City. A very livable looking house.
The three houses with such interesting stories and such diverse architecture -- all designed by the same remarkable woman.
I was thrilled to be able to find out the story of these three houses -- the houses that we were able to take a peek at in April at the Estate Sale.
We drove home tired but happy and to me, the icing on the cake was finding the history of these three homes. They shall always hold a special place in my heart.
It's Wednesday -- Outdoor Wednesday so please join Susan at A Southern Daydreamer to see where all we've gotten this week!
Posted by Martha at 1:59 PM

It is difficult for woman born anytime after 1960, to imagine what obstacles a woman who wanted to design and build houses in the early 1900 had to overcome. They could not vote, it was difficult to own property in their own name. Can you imagine? It is great that the community appreciates these houses enough to preserve them. Thanks for sharing.

Such an interesting post and how fun that "your" house was included in the tour! I love reading the stories of women who pioneered through and worked at professions that previously only had their male counterparts. Where would we be today without them? This is a tour every young woman should take!

What a spectacular post today, Martha. I loved the tour and was delighted to know how architects of our gender help mold the homes of Kansas City. Have a greats day. Blessings...Mary

The houses are beautiful and fascinating. Knowing the history behind a house makes it even more interesting. What character.

Very cool! I love that last house. Having lived in this area almost my entire life, and having grown up admiring houses just like that one, I never dreamed that some of these houses were designed by women. How interresting!

What an interesting post! Thanks for taking us along. How wonderful that these homes are preserved and appreciated.
I'd love one of those creme brulee. ~ Sarah

What a spectacular post today! I loved the tour and the history. Thank you!

What a fascinating and educational tour you took!!! Thanks for sharing it with us. And I agree that the creme brulee at Pierponts is wonderful!! Have a happy Wednesday!

I feel like I was along for the journey - very fun!

I have thoroughly enjoyed this tour and commentary. What a wonderful outing. I would have loved to have been on board--including the lunch in Union Station. The chicken pie looks delicious!

You got me hungry with those food shots. I enjoyed your post. It's so much fun to visit historic buildings and learn about how they came to be and the people behind them. THank you.
Su-sieee! Mac
This and That. Here and There. Now, Sometimes Then.

Martha, this was fascinating and so informative. Thank you very much.

Hi Martha,
I'm still digging into your older posts and being delighted all the way! KC has so many beautiful, old homes and how great that women had a part in their creation! Loved seeing these...thanks for taking us along!!!