Too Much Time on the Couch!

Although I'm up and about -- cleaning and cooking and doing all of my household chores -- even with my new (just three weeks old) knee, I did spend too much time on the couch and in the chair in the living room -- staring at the mantle . . . . staring at the game table.
So since I'm now up and about -- without walker and cane, I did a bit of tweaking to the space. Paint and wallpaper and upholstery are major changes -- and they don't get changed often. But tabletops and mantletops are changeable . . . . and so . . . .
I did a bit of a change in our living room. And even though my time there is way less than it was -- I will once again be confined to the space when surgery is done on knee 2. 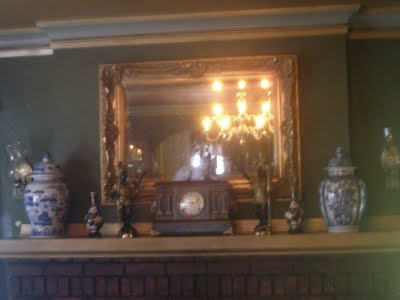 This arrangement had been there for a while -- far too long actually. I do think what I wanted changed the most was the artichoke tulipieres. They, for some strange reason, didn't look right. 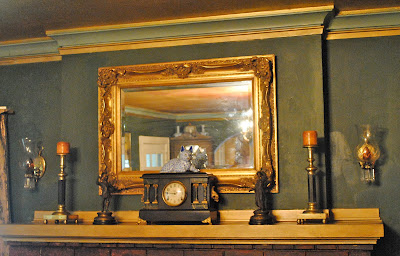 So took everything but the clock away (for that mantle is it's home) and brought some big old Frederick Cooper candlesticks and some small bronze statues. Age and subject are uncertain but we've had them for a while -- originally they were on the mantle but were moved many years ago and for a long time have resided on the bookshelves in the living room.
I like the cleaness of the new mantlescape. You can see the sconces much better and I like the black flowing from one end of the mantle to the other. 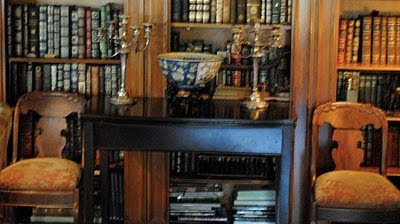 The game table with an oriental bowl and some silver candelabra. Kept purposely clean for if we want to use it as a table, it's far easier to remove a couple of candlesticks and a bowl than a lot of things.
But it looked bare -- at least to the lady on the couch and in the chair and so, I decided to move things arounds a bit. 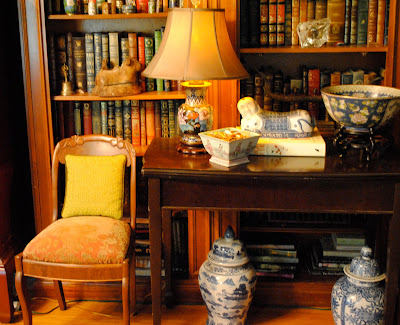 The mantle ginger jars are now under the game table. And there is blue and white on top as well. 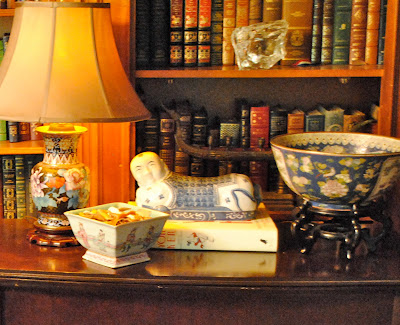 The bowl stayed. It' a favorite oriental bowl -- I love the deep blue color. A cloisonne lamp, a blue and white Asian "pillow" and another old Estate find Asian bowl with potpouri inside.
It's a better greeting, I think, to those who come to Linderhof for it really is the first thing you see when the door is opened.
Will this table and mantle stay this way -- probably not -- for although I don't move furniture I do move tabletops around. That's how Linderhof stays fresh. And it's always nice to bring out old things to relove once again.
It's Monday so I'm joining Susan at Between Naps on the Porch for Met Monday. My changes are always small but they are changes. And if you don't change, you get stale!
Posted by Martha at 6:15 PM

Martha, this room makes me want to come and sit awhile sipping an old port. It looks so comfortable!

Your traditional style with Asian enfluence is very lovely! Everything looks SUPER CLEAN!

Mantle looks great as does the table. Haven't seen that much of your house before. It's lovely. Hope you'll stop by and see us. Jane F.

Your home is just lovely! I love the tradional feel, and all your treasures. I understand wanting to change things around, I tend to do that too! I'm glad that you're feeling better...thanks for sharing your transformations.
Sharlotte

Hi Martha! I am glad you are doing well enough to redecorate...always a good sign! lol I love teh changs you have made! You have a wonderful collection of beautiful things! My favorite change...the ginger jars under the table! I hope you are having a great weekend!...hugs...Debbie

Martha, I love your changes. The mantel looks fabulous. I love the look of the black. Very peaceful and serenely elegant. Your table is also stunning. Using the urns under the table is such a great idea and the new accessories on the top are just perfect. Beautiful changes. Hugs, Marty

One can only look at the same scenery for so long. I spent some time laid up once and all I wanted to do was dust as I could see it accumalate I swear. :-) Glad you're feeling like doing!

I like the changes, especially the mantle. When I change things around I fall in love all over again with whatever is in the spotlight.

I love the new mantel look and the vignette on the table with that lamp looks so good and makes the space cozy.

love the new mantel.. it's really splendid... and the table did need your perfect touch.. get well.

Hi Martha! Oh, I do love your changes! Your home is just so beautiful and you have the most gorgeous things!
Be a sweetie,
Shelia ;)

Such a lovely room! You are a talented stylist! There really is an art to it! I choose lovely things, but I can't decide where to put them! I guess it's an ADD thing! lol

Martha, there is always an upside to a sedentary recovery! This looks lovely and, as you said, new things to love again
xoxo Pattie

I love all the changes! I never noticed the pretty wall and trim paint before - beautiful!

Hi Martha.....Glad you are up and about...... your home is lovely. Love the look of your fireplace. You have some great treasures. ;-)

Nice changes....I love keeping things fresh around the house. Chnaging things....just small changes.....makes a HUGE difference without spending any money. All you have to do is shop around the house or dig out things that have been stashed away. Thanks for sharing and stopping by. Became a follower!

The changes are great. I can't help but visit you because your warm photos always call to me!
Machelle

Everything looks lovely, Martha. If one must be housebound this is not a bad place to recuperate. When is the next surgery? I hope the day treats you well. Blessings...Mary

Martha, I love it! :) The vignette by the bookcases is stunning - I'm going to copy this one day, and please know - you'll get full credit! I'm hoping you'll reprise this for my Vignette Friday post. I'll have the linker up, so that you can link to these or others - you're so good at it! Thanks for stopping by the Sunday Saver post. I agree that a good re-upholsterer, or ambitious DIYer could fit an insert into that circle, making those chairs even more fabulous! :) Great post today - super inspirational.

Great post! I love the changes and I love your accessories. It was so nice to have you stop recently.

Your rooms are so elegant and I love your taste in decor.The mantle,though nice as it was, to my mind is much better with the black theme.
Glad you are up and about,you have recovered very quickly,in only three weeks.Do not be tempted to over do things,it is still early days,in your recovery.

What a warm, inviting look you have created. Love the soft glow of the lovely table lamp.
Wishing you all the best with your new knee...I just had my 2nd one done in February.
Life is good!

I love a clean room! Don't do it often enough myself and I don't have the knee excuse! Love your home, Martha! You are just the best!

Martha, your changes are lovely. I especially love the game table. The lamp is to die for. I follow many blogs through "Naps on the Porch" even though I don't blog. I have always enjoyed your blog. I don't comment often because I don't blog but your reference to your knee made me want to talk to you. Don't dispair about the knees. You seem to be doing very well. I have had both my knees replaced. I am 70 yrs old and I can climb ladders, garden and walk for hours. The new knees gave me a new lease on life. Hugs, SavannahGranny

I am glad you are moving around and feeling better! I love the mantle, but I am drooling over those bookcases. Love all your Oriental touches!

So when is your other knee being done?

It's beautiful! It's amazing how changing things a bit makes us feel so content. It's a beautiful place to read a fine book...

Glad you are now up and about and able to get on with stuff.