For many many years, Fort Scott had a convent for the Sisters of Mercy. They ran a hospital, a nursing school, and the nuns that worked and ran the hospital and nursing school lived in the convent.
Alas, things change and all but one of the Sisters was moved to Saint Louis and the convent was closed. When it was closed, the items were auctioned off. And, of course, we were there!
On the walk through, I saw these drawings and realized how great they would be for Linderhof's kitchen. I love art in the kitchen but not just any art -- it has to be special and these colored engravings were special!
They sold the lot at so much per and take as many as you want -- the best way in my opinion to sell them.
For a minute, I thought I had them at $5.00 each but ended up paying $15 for alas, I had competition!

They are engravings about food -- drawn up to an architect's specification and handcolored. They date to October 1, 1980 and were given to the Sisters by a Nevada architect friend of ours, Jim Adams. 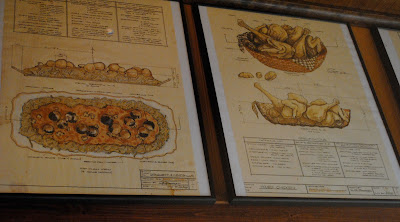 Spaghetti and meatballs and fried chicken . . . . 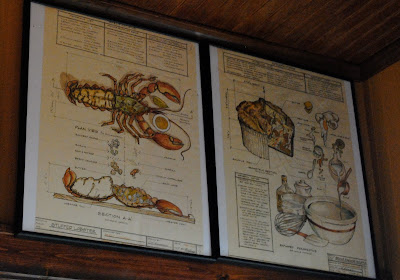 Lobster Thermador and Grand Marnier Souffle . . .
There are two more -- but daughter Sarah has those -- bread and an ice cream sundae. Someday, the six will be reunited.
I did have them in the kitchen for a long time but their original frames fell apart and they fell off the wall and broke damaging one of the pictures. I found new frames that aren't as dramatic as the originals but are more sturdier. And I moved them . . . . to the breakfast room. The perfect place for these special rare pictures.
A great memory of some great ladies who certainly did a lot for our little town on the prairie and a memory also of a dear friend of ours.
It's Tuesday and so it's time for Three or More Tuesday. Please join Tam at A Gypsy's Corner to see other threesies this Tuesday!
Posted by Martha at 6:25 PM

Martha,
Thank you for a "stroll down memory lane"! One of the Sisters
helped bring our oldest son, Bill, into this world. Born in 1973 at Fort Scott Mercy Hospital! I love the pictures you were able to purchase! Thank you for sharing and for the memories!
Fondly,
Pat

What fun art to have hanging on your breakfastroom wall!! It is sad that so many convents are closing. And many parishes are facing not having a priest. I wonder what it will take for the Catholic church to allow it's priests and nuns to be married. ?? I know at least one young man who would chose to be a priest if he could marry and have children.

What a treasure! You have an amazing eye for found objects, Martha. I hope you are having a great day. Blessings...Mary

How interesting for a kitchen wall.

What a wonderful addition to any kitchen. These are most unusual and certainly special that you know the artist.